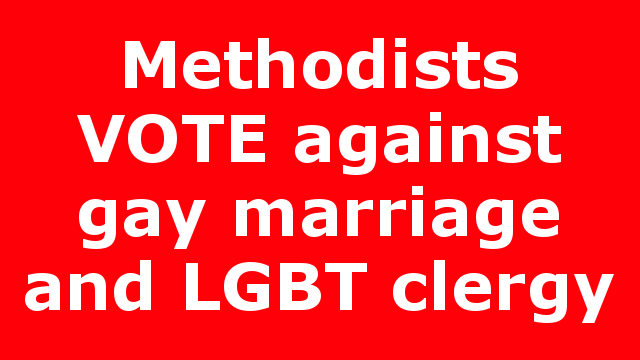 United Methodist churches and clergy could face removal from the denomination if they do not affirm its stance against gay marriage and noncelibate LGBT clergy by 2021. The church reached the decision in a vote at a General Conference in St. Louis on Tuesday.

The vote for the “Traditional” plan came after the church voted to reject an earlier proposal, known as the “One Church” plan, which would have allowed local churches to perform same-sex weddings and hire openly LGBT clergy. That move was pitched by proponents as a way to keep the increasingly fractious denomination together amid widespread disagreements about scripture and the morality of same-sex relationships. “Many of us have members who are saying they will leave,” said the Rev. Tom Berlin of Virginia, a member of the church’s legislative committee. “A virus of conflict will spread.”

Instead, United Methodists voted to push forward the “Traditional” plan, which passed with a vote of 438 to 384.
“Today, more than 800 worldwide General Conference delegates affirmed the Traditional Plan as The Way Forward for The United Methodist Church,” Bishop Scott Jones said in a statement. “This decision resolves a long-standing debate about how we can best accomplish our mission of making disciples of Jesus Christ for the transformation of the world.” “Our views on same-sex marriage have not changed. We will continue to welcome lesbian, gay, bisexual, transgendered and queer persons to our churches and affirm their sacred worth,” the statement said.

The Spiritual Decline and Fall of the Republican Party: Is it time to form a Christian Center party?

Note: This is a spiritual blog on a political issue. It deals with the spiritual decline of the Republican Party. It has been the most…