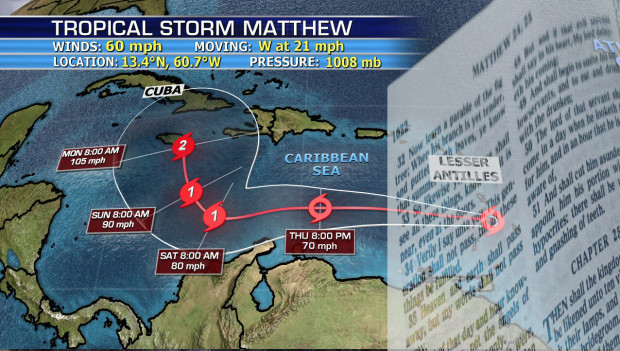 “Matthew 24 is knocking at the door” is a famous line from one of Johnny Cash’s many gospel songs. He is referring to The Gospel of Matthew, Chapter 24, which is the most important piece of scripture for Bible Prophecy buffs concerning Jesus’ Return, aside from the Book of Revelation and Luke’s Gospel, Chapter 21. In Matthew 24, Lord Jesus gives us one of the most detailed accounts of the Last Days and of signs pointing to His imminent Return to earth. When I heard that the next Hurricane would bear a Biblical Name, and even more notable, the name of the Gospel writer who gave such a vivid picture of the season leading up to Christ’s return, I knew right away that the storm would be significant. There is a lot more than just the Biblical Name though that has greatly sparked my interest. Before I get into the other Biblical connections to the Hurricane, here is what we know about Matthew thus far…

Matthew began as a tropical wave in the Atlantic Ocean and was officially designated a potential threat by the National Hurricane Center on, get this, September 24th. MATTHEW 24! On Wednesday morning, Matthew formed into a tropical storm east of the Caribbean. Forecast models suggest the storm will intensify and make a sharp turn to the north, putting the Gulf of Mexico and the East Coast at risk, along with Cuba, Jamaica, and Hispaniola. Matthew will cross into the Caribbean this evening. There the storm will find an environment with low vertical wind shear, higher humidity and very warm water temperatures, which are all of the ingredients needed to strengthen the system. The National Hurricane Center expects Matthew to intensify quickly, becoming a hurricane by Friday. It will reach hurricane strength (winds of 74 mph) in the central Caribbean. Currently, tropical storm warnings are in effect for several islands, including Guadeloupe, Martinique, St. Lucia, Dominica, Barbados, St. Vincent and the Grenadine Islands. Matthew is expected to veer north or northwest late this weekend and into early next week.

How far west Matthew will turn will decide whether or not the U.S. Gulf Coast or the Atlantic Seaboard will be at risk, forecasters say. If high pressure is stronger near the Eastern United States, that could steer Matthew closer to some part of the USA. If a southward dip in the jet stream is in play over some part of the Eastern U.S., that would help to deflect Matthew to the east and away from the States. The current forecast has some form of high pressure aloft over part of the East next week, which would point to a land threat for at least part of the U.S. coast. The storm will bring rain to Northeastern States this weekend. If that storm lingers into next week, it would bring the system toward the U.S. Atlantic coast. If the storm in the Northeast exits and the forward motion of Matthew continues it could open the door for the system to come onshore in the Southeastern states. If Matthew moves northward across Cuba early next week, as the storm is expected to do, then it could find a way into the eastern Gulf of Mexico. Very remote possibilities range from a continued westward path into Central America, and a very unlikely turn to the northeast, keeping the storm east of the America next week.

It is possible that the Hurricane could strengthen to a Category 2 storm by Monday, with current figures putting potential landfall in the U.S. sometime next week. It is too early to determine what day. What makes this storm most ominous, is that currently it is forecast to take the same track which Hurricane Hazel took back in 1954. Hazel mowed through the Mid-Atlantic and Northeast striking the United States near the border between North and South Carolina, as a Category 4 hurricane. Hazel affected Virginia, West Virginia, Maryland, Delaware, New Jersey, Pennsylvania, and New York; it brought gusts near 100 mph, and caused $281 MILLION in damage.

Matthew is the 13th named storm of the 2016 Atlantic hurricane season, and the number 13 is extremely significant because it represents a Hebrew Name of our God. A Name used for YaHWeH God in our Holy Bible is “EL”. I’m sure many of you who are familiar with the Old Testament recognize this Name, as many of the patriarchs referred to YHWH as “EL-Shaddai, EL-Elyon, EL-Elohe Israel”, among many other titles. “ELohim” is the word used to describe the Trinity (Father, Son, and Holy Spirit). EL means GOD. YaHWeH means LORD. For instance, YHWH EL Elohe Israel would be translated “YaHWeH GOD The God of Israel”. So when we see the numbers 31 or 13, we are viewing one of the Holy Names of God. That is why it really bugs me when people view the number as “unlucky”. For me, the number 13 represents only good fortune and never misfortune. Whoever started that superstition obviously didn’t know their Holy Bible.

Also, beside Tobias, Matthew is the only Hurricane bearing a Biblical Name in 2016. I believe this is worthy of our attention, because while all hurricanes, earthquakes or historic natural disasters are Judgments of God, I believe the judgments with direct connections to the Holy Bible are prophetically significant. In 2012, the year which Barack Obama had been unfortunately re-elected, Hurricane ISAAC (Biblical son of Abraham, and father of Jacob {also known as Israel}) struck the United States, causing nearly $2.5 BILLION in damage. So what does Matthew have in store for the U.S. or outlying countries in it’s path? I thought to look, not to weather forecasters, but to the most accurate forecaster, Almighty God and His Word of Truth.

I searched the Book of Matthew for any numbers connected to the storm. I searched the Gospel’s 13th Chapter, as it is the 13th named Storm. Here is what I found –

(Matthew  13:1, 15, 49, 57)  “The same day went Jesus out of the house, and sat by the SEA side… JESUS said, This people’s heart is waxed gross, and their ears are dull of hearing, and their eyes they have closed; lest at any time they should see with their eyes and hear with their ears, and should understand with their heart, and should be converted, and I should heal them… It shall be at the end of the age: the Angels shall come forth, and SEVER the wicked from among the just… And they were offended by JESUS, but He said unto them, A prophet is not without honor, save in his own COUNTRY, and in his own house.”

What I gathered from Chapter 13 was very interesting and could very well serve as a prophetic warning to America today. First, the SEA is mentioned (where hurricanes form), and His description of the people in His day very much fits the description of American society today, which turns further and further away from Him more and more each new day. Second, the “End of Age” is mentioned, in which I truly believe we are living. Third, he spoke of the angels severing the wicked from among the just. Could that mean this is going to be a very deadly Hurricane? Finally, the last verse really spoke to me more than all of the others I read. When He was speaking in verse 57 of being without honor in His hometown of Nazareth, what He said could definitely be just as easily spoken to America today.

America was undoubtedly formed as a Christian Nation and has been for over 200 years, but Obama and gross hearts of the people in this land have tried extremely hard to change that over the past 8 years. So if we applied verse 57 to today, would Jesus be without honour in his Own COUNTRY (Christian America)? The answer would be YES sadly. The BIGGEST Biblical significance of Hurricane Matthew is that it falls DURING the Biblical “High Holy Days”. Coincidence? I think NOT. The Hurricane, if it does strike America, would make landfall at the open of the new year 5777!

At sundown on October 2nd, the Biblical New Year 5777 will begin. The number 777 represents our GOD. October 3rd is New Year’s Day on the Hebrew Calendar of Israel. The 2-Day Biblical Feast ends at sundown on October 4th. Biblical days run from sundown to sundown. So Matthew could very well hit the United States ON ROSH HASHANAH! Wow, that would be something, and a much needed WAKE UP call for America. Rosh Hashanah is known as the Feast of Trumpets. The shofar (trumpet) is traditionally blown each morning for the entire month of Elul, the month preceding Rosh Hashanah. The sound of the shofar is intended to AWAKEN the listeners from their “slumbers” and alert them to coming JUDGMENT. Will Hurricane Matthew be another disastrous judgment upon backslidden America? Stay tuned…

UPDATES: On Friday night, Matthew was upgraded to a massive Category FIVE Hurricane. Matthew became the lowest latitude Category 5 Hurricane in the Atlantic ON RECORD (beating out Hurricane Ivan in 2004). It is also the most powerful Hurricane in nearly a decade.

On Monday, Florida Governor Rick Scott declared a State of Emergency for ALL of the State’s Counties.

Matthew also hit Cuba on Tuesday afternoon, bringing winds near 140 mph. Matthew is expected to remain a powerful Hurricane through the week. Florida, the Carolinas, Washington D.C., and virtually the entire East coast are in Matthew’s path beginning Thursday.

On Wednesday, Matthew as a Category 3 Hurricane moved over the Bahamas with 120-mph winds, and is forecast to STRENGTHEN approaching Florida to a Category FOUR hurricane with 130-mph winds on Thursday. Hurricane watches and warnings are in effect for the ENTIRE east coast of Florida. This weekend, Matthew will reach the coasts of Georgia and the Carolinas.

On Thursday, Matthew approached Florida’s East coast as a strong Category 4 Hurricane with 140-mph winds, and the eye of the storm is expected to make landfall somewhere between West Palm Beach and Jacksonville, or hug the coast from West Palm Northward. Matthew is the strongest Hurricane to hit Florida in 25 years! The storm could possibly strengthen to a Category FIVE hurricane before making landfall in Florida, so let’s pray that doesn’t happen.

The current long-range forecast shows the Hurricane actually looping around back toward Florida next week, setting up the State for a second strike by Matthew! Meteorologists say this would be unprecedented.

“And JESUS said.. upon the earth shall be distress of nations, with perplexity; the sea and the WAVES ROARING; Men’s hearts failing them for FEAR, and for looking after those things which are COMING on the earth.. And then shall they see ME (Jesus Christ) COMING in a cloud with Power and great Glory. And when these things begin to come to pass, then LOOK UP, and lift up your heads; for your redemption draweth NEAR.” ~ Luke 21:25-28

“Behold, a WHIRLWIND of The LORD is gone forth in FURY, even a GRIEVOUS whirlwind: it shall FALL grievously upon the head of the wicked. The ANGER of The LORD shall not return, until He has EXECUTED, and till He has PERFORMED the thoughts of His Heart: in the LATTER DAYS you shall consider it perfectly.” ~ Jeremiah 23:19-20 & 25:32/Nahum 1:3

Here’s what you need to know:

FacebookTwitterSubscribe
Subscribe to receive all news to your email or phone: [wysija_form id="1"]
24biblicallydoorhurricaneknockingmatthewnamed

TRUMP is the obvious GOP choice #1?