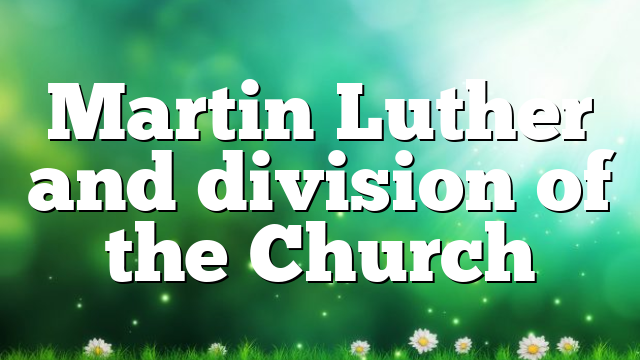 I was raised in the 1950, in a solidly Irish and Italian neighborhood of New York. It was the pre-Vatican II Catholic Church, and we were taught that Martin Luther led the “Protestant Revolt” against the Catholic Church. Worse, he was largely responsible for “rending the unity” of the Universal Church. Even today, when Catholics no longer attack Luther directly, they often slyly point out how many thousands of Protestant denominations there are – some of them quite weird. [1]

Actually, that accusation against Luther is much exaggerated.  The fact is that the Church had already been “rent apart” several times over. Eastern Orthodoxy had separated from the Western Church in 1054, centuries before Luther was born. Even earlier, in the Third Century, the Western Catholic and Oriental Orthodox Church (Coptic) had done the same, and the Nestorian Church of late Antiquity, at one time the largest among the Christian groupings, had long been separated and independent from Eastern Orthodoxy.

All these divisions, including Luther’s contribution, seemed to be a wicked disobedience of Jesus prayer for the Church to be one (John 17). Indeed, it has been especially shameful how Christians of different groups and denominations often persecute each other. This began as early as the Third Century when Oriental Christians (now the Coptic Church) and Western Christians in North Africa started going at each other – killing the other’s priests, and burning their churches.[2] Even worst happened in the Thirty Years War (1618-1648) when Protestants and Catholics fought each other to exhaustion, and were forced to accept that Church unity could not be brought about by exterminating the other side.

Thankfully, things have gotten a lot better since the mid-Twentieth Century. This is not due to the tireless (to avoid the word “boring”) inter-faith ecumenical conferences, but mainly due to the work of the Holy Spirit in bringing real friendship, joint actions and prayers among the whole spectrum of Christian denominations. The key has been to downplay the importance of theological and philosophical distinctions and instead concentrating on the Lordship of Jesus.

I had a personal illumination about this as a young Charismatic Catholic going to my first Full Gospel Businessmen’s Fellowship International breakfast meeting at a local hotel (circa 1975). There were over a thousand believers worshiping and witnessing about the works and graces of the Lord without a word of theological discourse. No Catholic stood up and said, “Why don’t you accept Mary as ‘Mother of God?’” and no Baptist shouted, “I don’t like the stupid Catholic belief in ‘transubstantiation!’”  (The big issues of the Reformation). Rather everybody worshiped and praised the Lord, swapped “war stories” about healings and deliverance ministry, etc. and listed to a speaker witness how the Lord impacted their lives (see chapter 11 below).

Now back to Luther. Luther’s prophetic reproof of Catholic abuses and his insight into salvation by grace alone did not cause the Church’s fragmentation. Rather it was mainly the reactions of the Catholic hierarchy that would not accept his reproof that forced the division. Catholics should admit this since as they have recently accepted that Luther was right about the core issue, salvation by faith alone.[3]

But let me go even further into what some might consider unorthodox thought. Luther did in fact organize and lead what later became known as the Lutheran Church. He became, Bishop of Saxony, but without the title. By the time of his death there were the outlines of various, separate Protestant denominations, united only in their hatred of Catholicism. Catholics reciprocated this hatred, of course.

However, we now accept that having different denominations does not mean that hatred and contention must follow, as the FGBMFI meetings prove.  Inter-denominational prayer meetings, service projects, and similar joint efforts point to the fact that denominations as administrative divisions do not destroy the unity of the Body of Christ. Maybe the unity was there all the time, even during the First Jesus War of Oriental vs. Western Catholics. That unity was occulted in the mind of believers by Satan goading Christians to hatred and warfare, and by the prideful assumption that one’s denomination and one’s philosophical and theological understandings of the faith were the only true ones.

Let’s get back to Luther. The unintended consequence of his forming the Lutherans, and the other denominations that issued out of the Reformation, may in fact have been a tremendous blessing to the Body of Christ. The Reformers’ actions “regularized’ denomination formation, and made it non-heretical. That is, unlike the Roman Catholic vs. Eastern Orthodox divide, where each side declared the other heretical, Protestants have been mostly tolerant of new denominations and would rarely call them heretical. Very early, for instance Calvinists and Lutheran respected each other despite their theological divide. This was long overdue, and a correction to the Church’s inability to see that different administrative structures (and bishops) or different philosophical understandings of doctrine do not necessarily make for true heresy.

That error may be placed at the feet of St. Augustine of Hippo. During his term as bishop of Hippo, a group of congregations, called the Donatists, formed to express a more morally rigorous form of orthodoxy than the normal Western Catholic Church. Augustine tried to debate and browbeat them into re-joining the Catholic Church, but could not do so. Finally, he declared them heretics, and suggested they be disciplined and coerced, even to death, by the state into re-joining the majority church.[4] The Church believed him and the heritage of heretic burning, and the Inquisition was the demonic fruit of his mistake.

Had Augustine proclaimed something more tolerant, perhaps peaceful, co-existing denominations would have been formed early in Church history. Certainly, for instance, Orthodox Catholics and Oriental Catholics never cooperated or came together in joint prayer services for the conversion of the Arab or Germanic tribes who lived on the periphery of the Roman Empire. In fact, when the Muslim invasion of North Africa came two centuries later, the Roman Catholic and Oriental Orthodox churches were still bitter enemies, feuding and persecuting each other. This made the Muslim conquest easy, and conversion by disillusioned Christians to Islam common.

On the godly purpose of different denominations, let me cite the work of Fr. Peter Hocken, one of the great scholars of the Catholic Charismatic renewal, and a person zealous for both unity among Christians as well as reconciliation with the Jewish people. Hocken believed that new denominations often carry with them special graces and insights that are often influential in other sections of Christendom. For instance, the church has been enriched by the Methodists’ understanding and zeal for personal holiness of all disciples, as it has by the Pentecostals’ recovery of the word gifts. Having denominations and churches that are free to express, develop and test out their insights and yet not be shut down by a traditionalist bishop or an Inquisitor, has been critical in the growth and expansion of Christianity in the Twentieth and Twenty-first centuries.[5]

This brings us back to Luther.  As an ex-Catholic and now Anglican, I am profoundly grateful for Luther’s insight about justification by faith. I am grateful for his establishment of the Lutheran denomination, which stressed the importance of the Word for every believer. Lastly, I am grateful for the unintended consequence of him nailing the 95 Theses up on the door, sparking the multitude of Protestant (and Pentecostal) denominations.

[3] See the Vatican (papal) document: “Joint Declaration of the Doctrine of Justification,”  at the Vatican website:  http://www.vatican.va/roman_curia/pontifical_councils/chrstuni/documents/rc_pc_chrstuni_doc_31101999_cath-luth-joint-declaration_en.html

The Jezebel spirit is active in the church today

The Jezebel spirit is active in the church today and I see it getting worse. People are using their position, their office in the…