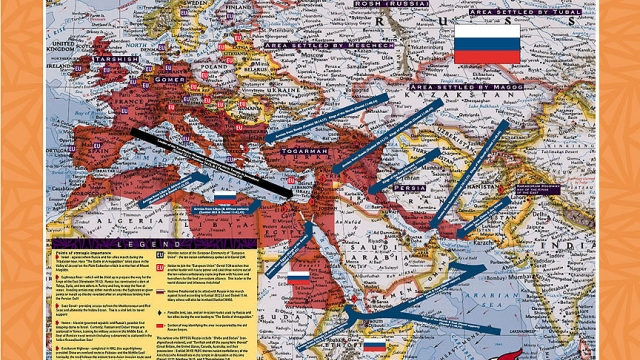 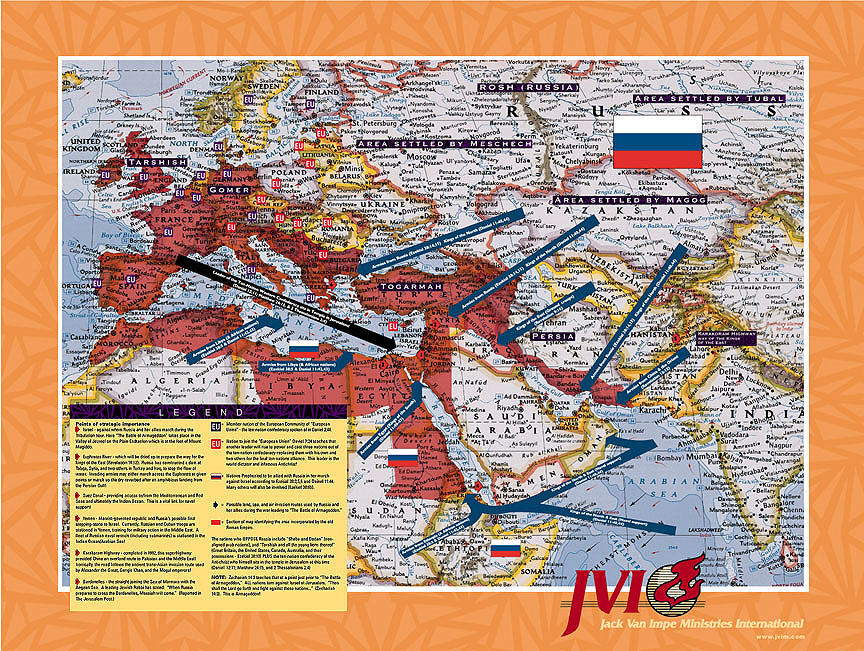 Israel – against whom Russia and her allies march during the Tribulation hour. Here “The Battle of Armageddon” takes place in the Valley of Jezreel on the Plain Esdraelon which is at the foot of Mount Megiddo.

Euphrates River – which will be dried up to prepare the way for the kings of the East (Revelations 16:12). Russia has constructed a dam at Tabqa, Syria, and two others in Turkey and Iraq, to stop the flow of water. Invading armies may either march across the Euphrates at given points or march up the dry riverbed after an amphibious landing from the Persian Gulf.

Suez Canal – providing access to/from the Mediterranean and Red Seas and ultimately the Indian Ocean. This is a vital link for naval support.

Yemen – Marxist-governed republic and Russia’s possible final stepping-stone to Israel. Currently, Russian and Cuban troops are stationed in Yemen, training for military action in the Middle East. A fleet of Russian naval vessels (including submarines) is stationed in the Indian Ocean/Arabian Sea.

Karakoram Highway – completed in 1982, this superhighway provided China with an overland route to Pakistan and the Middle East. Ironically, the road follows the ancient trans-Asian invasion route used by Alexander the Great, Gengis Khan and the Mogul emperors.

Dardanelles – the strait joining the Sea of Marmara with the Aegean Sea. A leading Jewish rabbi has stated: “When Russia prepares to cross the Dardanelles, Messiah will come.” (Reported in The Jerusalem Post).

EU (blue) – Member nation of the European Community or “European Union” – the ten-nation confederacy spoken of in Daniel 2:44.

EU (red) – Nation to join the “European Union”. Daniel 7:24 teaches that another leader will rise to power and cast three nations out of the ten-nation conferderacy – replacing them with his own and two others for the final ten-nations alliance. This leader is the world dictator and infamous Antichrist!

(Russian flag) – Nations prophesied to be allied with Russia in her march against Israel according to Ezekiel 38:2,5,6 and Daniel 11:44. Many others will also be involved (Ezekiel 36:6b).

(blue arrow) – Possible land, sea and air invasion routes used by Russia and her allies during the war leading to “The Battle of Armageddon”.

(red area) – Section of the map identifying the area incorporated by the old Roman Empire.

The nations who OPPPOSE Russia include “Sheba and Dedan” (non-aligned Arab nations), and “Tarshish and all the young lions thereof” (Great Britain, the United States, Canada, Australia, and their possessions – Ezekiel 38:13) PLUS the ten-nation confederacy of the Antichrist who himself sits in the temple in Jerusalem at this time (Daniel 12:11; Matthew 24:15 and 2 Thessalonians 2:4).

NOTE: Zechariah 14:2 teaches that at a point just prior to “The Battle of Armageddon”, ALL nations turn against Israel at Jerusalem. “Then shall the Lord go forth and fight against those nations…” (Zechariah 14:3). This is Armageddon!
Facebook Comments
apocalypselifemapthe