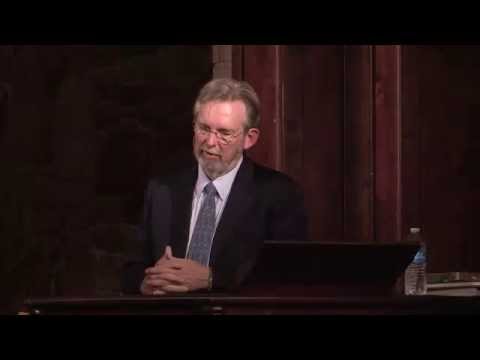 Lecture by Richard Hays, “Did Moses Write about Jesus? The Challenges of Figural Reading”

Given 7pm – 9pm on May 23, 2015 at The Lanier Theological Library Chapel in Houston, Texas. It is part of the Lanier Library Lecture Series. A series devoted to bringing world class lectures to benefit the community of all those who might be interested.

I am indebted to the generosity of the library to allow me to share these videos of theirs. Please support them by visiting their website for more information and resources:

In his lecture, Richard Hays will illustrate and explore the surprising ways in which the four Gospel writers interpreted Israel’s Scripture as a witness to the identity of Jesus. The talk will first summarize and then extend the hermeneutical proposals explored in his recent book “Reading Backwards: Figural Christology and the Fourfold Gospel Witness.” What might it mean for readers in late modernity to take seriously the interpretative methods employed by the Gospel authors? Are Christian claims about Jesus bound inextricably to these interpretative methods?

Richard B. Hays, Dean and the George Washington Ivey Professor of New Testament at Duke Divinity School, is internationally recognized for his work on the letters of Paul and on New Testament ethics. His scholarly work has bridge the disciples of biblical criticism and literary studies, exploring the innovative ways in which early Christian writers interpreted Israelʼs Scripture. Haysʼ work focuses on New Testament theology and ethics, the Pauline epistles, and early Christian interpretation of the Old Testament. He received his Master of Divinity from Yale Divinity School and his Ph.D. from Emory University.

In the field of New Testament Studies, Hays has often been identified with figures such as N.T. Wright, Luke Timothy Johnson, and Raymond Brown. Some of Professor Haysʼ studies surround the narrative interpretation of Scripture, the new Testamentʼs use of the Old Testament, the subjective genitive reading of pistis Christou (“faith(fuleness) of Christ”) in Paul, and the role of community in the New Testament. Hays is well known for his criticisms of the Jesus Seminar and the modern Historical Jesus movement. He has also been vocal about his criticisms of Dan Brownʼs best-selling The Da Vinci Code for its controversial historical claims.

His book The Moral Vision of the New Testament: Community, Cross, New Creation was selected by Christianity Today as one of the 100 most important religious books of the twentieth century. His most recent books are The Art of Reading Scripture (2003, co-edited with Ellen Davis), The Conversion of the Imagination (2005), Seeking the Identity of Jesus: A Pilgrimage (2008, co-edited with Beverly Roberts Gaventa), and Revelation and the Politics of Apocalyptic Interpretation (2012, co-edited with Stefan Alkier).

Professor Hays has lectured widely in North America, Europe, Israel, Australia, New Zealand, and Hong Kong. An ordained United Methodist minister, he has preached in settings ranging from rural Oklahoma churches to Londonʼs Westminster Abbey. Professor Hays has chaired the Pauline Epistles Section of the Society of Biblical Literature, as well as the Seminar on New Testament Ethics in the Society for New Testament Studies, and has served on the editorial boards of several leading scholarly journals.

As a theologically conservative Methodist throughout the course of his career, he has remained committed to his Wesleyan roots in emphasizing the importance of charity and friendship in the Christian life. Moreover, Hays is a committed pacifist and makes his position clear in The Moral Vision of the New Testament, in which he argues that Jesus Christ taught his disciples to be non-violent.

Jesus did not give specific instructions

Jesus did not give specific instructions about how often we ought to take Communion. He merely said, “…as often as you eat this…