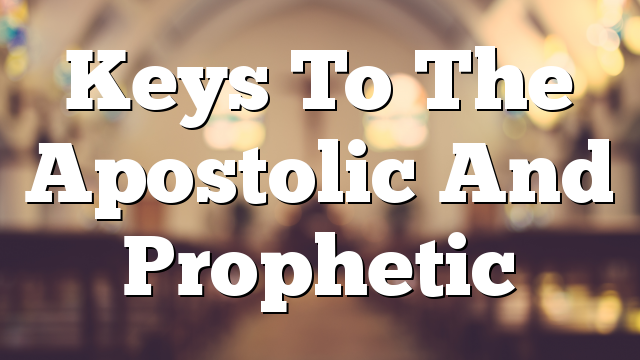 Keys To The Apostolic And Prophetic: Embracing the Authentic Avoiding the Bizarre

The authors of this book are both ordained ministers with the Assemblies of God. Joseph Girdler has served in pastoral ministry and is currently the Superintendent of the AG in Kentucky. Carolyn Tennant is professor emerita of North Central University and is an adjunct professor at the Assemblies of God Theological Seminary. Both have doctoral degrees and both have written books prior to this one. This volume focuses on the controversial ministries of the apostle and the prophet. Girdler and Tennant are very qualified to write this book. Girdler wrote his doctoral dissertation on the topic of “apostolicity” and Tennant has taught and ministered in the prophetic in a number of places around the world.

The book consists of a foreword, an introduction, and twelve chapters. Some of the chapter titles are: “Work Details for Apostolicity,” “Apostolicity and Relationships,” “The Prophetic Core,” and “God Uses Creative Prophetic Roles.” One thing that you might notice in this brief sampling of chapter titles is that the authors do not use the words “apostle” or “prophet.” This is a practice that they maintain throughout the book. They refer to biblical individuals who are identified as apostles and prophets by those terms but they do not use them for the contemporary expressions of these ministries. They explain their reasons for this. The authors feel it is best to refrain from using the words “apostle” and “prophet” when referring to ministry in the contemporary church because of the increased number of false apostles and prophets in our day. They prefer to focus on the functions of these ministries rather than the titles.

The subtitle of the book is Embracing the Authentic Avoiding the Bizarre. The writers help the reader to do this by setting forth both the positive qualities that characterize the life of a genuine apostolic or prophetic person as well as calling attention to signs that indicate that a person is not a genuine minister in these areas. For example, they say that people who genuinely function in the apostolic and prophetic are humble servants, who have been called by the Lord, and exhibit the fruit of the Spirit. False apostles and prophets generally lack these qualities, they are more self-absorbed. This is evidenced by their desire for titles and attention.

The book describes the work of both apostolic and prophetic people. Using Scripture the authors outline the duties of each ministry. For example, some of things that apostolic people do include: opening new territory for the gospel, moving in signs and wonders, and maturing and training the church. These functions are critical to the advancement of the gospel message. Prophetic peoples’ responsibilities include hearing from God and communicating what they hear to the person or group that the message is intended for. The authors make a distinction between those who prophesy and a prophet. They maintain that all prophets prophesy but not everyone who prophesies is a prophet. I believe this distinction is correct because a prophet, as described by Paul in Ephesians 4, is one who also trains the church for ministry. In addition to listing the functions of each ministry the authors offer practical instruction as well. For example, in a couple of the chapters dealing with the prophetic the issue of the delivery of a prophetic word is discussed. The authors say that just because a person receives a prophetic word does not mean that it should be delivered immediately. The when, who, where, why and how questions are discussed. I have read other material on apostles and prophets but I learned some new things by reading this book.

Apostolic and prophetic ministries are important for the church today, and the church needs them both.

The last three chapters give significant information that will help the reader distinguish true apostles and prophets from false ones in the contemporary church. Of special note in this regard is chapter 11, which contains a list of 21 questions that will assist a person in distinguishing between true and false apostles and prophets. The issues that are raised are important and relevant.This book is of significant importance for a number of reasons. First, the authors believe that the apostolic and prophetic ministries are important for the church today, and the church needs them both. With regard to this, they say that if the church is not experiencing these ministries it is not because God does not want to give them but that the church is not seeking them. Second, this book is important because the text will help the reader to discern and sift the genuine from the false. Third, unlike some other writers who see apostles as the most important of the five-fold ministries, Girdler and Tennant see them as members of the team. The ministries that Paul lists in Ephesians 4 are meant to function together. It is obvious that a lot of thought has been put into this book. This volume will be of benefit to any Christian who is interested in understanding the ministries of the apostle and prophet. It may be particularly helpful to a pastor who is trying to come to terms with these ministries and explain their contemporary significance to his or her congregation. I think that this book will find an audience not only within the Pentecostal movement but outside of it as well.

About the Author: John P. Lathrop is a graduate of Gordon-Conwell Theological Seminary and is an ordained minister with the International Fellowship of Christian Assemblies. He has written for a number of publications and is the author of four books Apostles, Prophets, Evangelists, Pastors, and Teachers Then and Now (Xulon Press, 2008), The Power and Practice of the Church: God, Discipleship, and Ministry (J. Timothy King, 2010), Answer the Prayer of Jesus: A Call for Biblical Unity (Wipf & Stock, 2011) and Dreams & Visions: Divine Interventions in Human Experience (J. Timothy King, 2012). He also served as co-editor of the book Creative Ways to Build Christian Community (Wipf & Stock, 2013). Amazon Author page. Facebook

The great tribulation is coming, the reign of the antichrist…