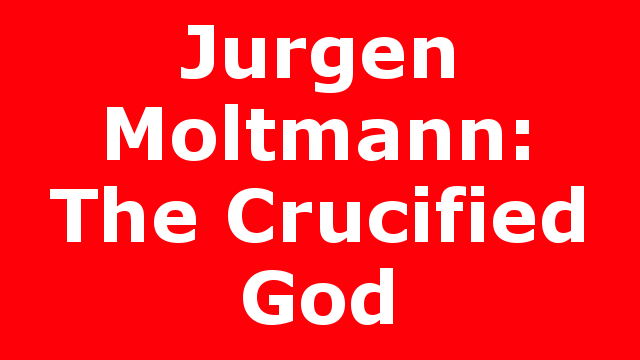 From its English publication in 1973, Jürgen Moltmann’s The Crucified God garnered much attention, and it has become one of the seminal texts of twentieth-century theology. Following up on his groundbreakingTheology of Hope, The Crucified God established the cross as the foundation for Christian hope. Moltmann’s dramatic innovation was to see the cross not as a problem of theodicy but instead as an act of ultimate solidarity between God and humanity. In this, he drew on liberation theology, and he was among the first to bring third-world theologies into a first-world context.

Moltmann proposes that suffering is not a problem to be solved but instead that suffering is an aspect of God’s very being: God is love, and love invariably involves suffering. In this view, the crucifixion of Jesus is an event that affects the entirety of the Trinity, showing that The Crucified God is more than an arresting title—it is a theological breakthrough.

Foreword
Miroslav Volf
Henry B. Wright Professor of Theology, Yale Divinity School
Founder and Director, Yale Center for Faith and Culture
I once visited Jürgen Moltmann at his home in Tübingen.
We were in his study, and I was sitting in the chair in which I
had sat many times as his doctoral student and while working
on a post-doctoral thesis under his supervision. I had just been
appointed as a professor at Yale, but I was still trying to puzzle
out his theology. By this time, I wasn’t so much trying to
figure out how its different pieces fit together or how as a
whole it fits into the trajectory of modern theology; I was
after something less tangible: the source of its energy and
power, of its ability to capture hearts as well as minds, and
to do so in Asia and South America no less than in North
America and his native Europe. I know of no theologian
from the second half of the twentieth century who has had as
powerful a global resonance as Moltmann has.
I started the part of our conversation about his theology
with a deceptively simple question: “Which of your books do
vii
you like the best?” He paused for a brief moment, just long
enough for me to wonder whether I had transgressed against
some taboo, akin to the one I would have broken had I asked
which of his four daughters he liked the best. Books aren’t
children, of course, persons whom we can harm when we
prefer one to the other. Still, in some ways we are our books,
and revealing preferences for these public presentations of
ourselves might feel uncomfortable. Not for Moltmann, I was
relieved to learn. “I think my best book is The Crucified God,”
he said slowly but without hesitation.
As I had walked up the Biesingerstrasse to his house, I
had been thinking that he might opt for Theology of Hope.
After all, that was the book that spelled out the eschatological
orientation of his entire theology, an orientation that, with
some shifts, remained constant all the way through The
Coming of God, the last substantive volume—the one before
the methodological finale—in the series of his “theological
contributions.” Theology of Hope was also the book that
brought him international fame, and not just among
theologians, as a report about the English translation of the
book on the cover of the New York Times attested. “Why The
Crucified God?” I asked him.
The Crucified God, Moltmann replied, was seminal to the
next twenty years of his theological work. Theology of Hope
had provided some key formal categories that he continued
to employ in an altered form—the “promise” acquired
increasingly a dimension of “presence,” for instance. But The
Crucified God laid the Trinitarian and soteriological
THE CRUCIFIED GOD
viii
foundation for subsequent books, starting with The Trinity
and the Kingdom. It introduced the notion of a God who
suffers in solidarity with afflicted creatures and redeems them
through that suffering. This simple and profound thought
lies at the heart of the book—difficult and unacceptable to
many, especially among trained theologians committed to
God’s impassibility, and hopeful and comforting to many
more, especially among the afflicted, whether they live in fear
for life in war torn cities, eke out a miserable existence in
shantytowns, wait for death in the belly of cruel prisons, or
struggle against an illness eating away their body or soul.
The Crucified God was published in German in 1972, when
Moltmann was a forty-six-year-old professor of theology at
the University of Tübingen. In a sense, though, he started
writing it immediately after World War II, as a barely
twenty-year-old prisoner of war. Raised as a secularist, in an
English prisoner of war camp he read the New Testament
and the psalms for the first time and was taken by words of
Jesus on the cross, a quotation from the twenty-second psalm:
“My God, my God, why have you forsaken me?” Young
Moltmann, afflicted both by captivity and by crushing guilt,
thought, “Here is someone who understands me.” Moltmann
described this as an experience of being found by God rather
than of finding God. God spoke to him with bloodied and
parched lips in cries of pain and abandonment, bitter fruits of
seemingly misplaced trust.
The Crucified God is theology at its best. I know some
experts will complain about the inadequacies of the book’s
account of the mystery of the holy Trinity. Moltmann
FOREWORD
ix
addressed some of them in subsequent work. Many of his
colleagues remain unpersuaded, of course, but facing
contestations is in the job description of an academic
theologian. Whatever one decides about the merits and
demerits of Moltmann’s doctrine of the Trinity in this text,
the fact remains: The Crucified God is a truly great book. It
is existential and academic, pastoral and political, innovative
and traditional, readable and demanding, contextual and
universal, deeply Christian and equally deeply human—and
all of this in explicating the bearing of the central Christian
theme (the crucifixion of Jesus of Nazareth) on a fundamental
human experience (suffering).
Academic theology is in crisis today. Theological schools
are closing, theological books are not being read, and the
discipline itself has lost much of its reputation—among
academics working in other fields, among ministers and their
flock, and among the general population. There are many
reasons for the present crisis of theology, but one of them is
certainly that academic theologians have been trained out of
doing theology the way Moltmann has done it in many of
his writings, and especially in The Crucified God. As many
theologians struggle to find their bearings, this book is one
shining exemplar of a theology that is alive and powerful.

When will the pouring out of the Spirit happen as mentioned in Acts 2:16-21? (Finis J. Dake)

When will the pouring out of the Spirit happen as mentioned in Acts 2:16-21? (Finis J. Dake)