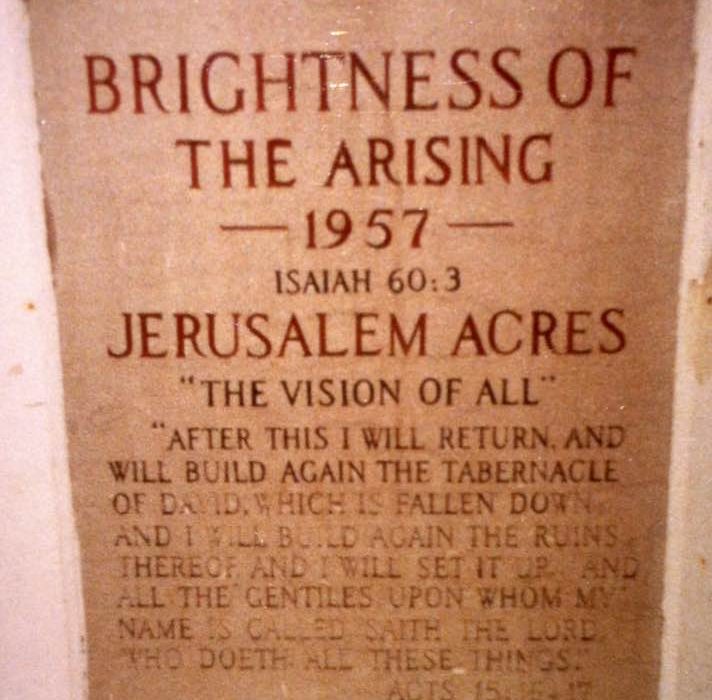 June 13… A Memorial Day For The Church of God

On this day, at Jerusalem Acres, in Cleveland, Tennessee, fly the flags of the Four and Twenty Elders, the flag of the Anointed, the flag of David, and the flag of The Church of God, which, along with the four symbols of the Jews and the four symbols of the Gentiles, contain the Vision of All. This scene on this day hallows June 13 as the memorial day that A. J. Tomlinson, the prophet that God chose to find The Church of God, found in 1903, in Cherokee County, North Carolina, at the place which the writer revealed to be Fields of The Wood. Also, this writer wrote the vision that portrays the Holy City in the 21st chapter of Revelation – The Vision of All of the Church, including both ends of the Church, the two barley loaves, making up the throne of David, the Bride, the Lamb’s Wife, that shall sit and reign with Him on David’s throne for 1,000 years – “The meek shall inherit the earth.”

Today, there are a number of groups visiting Jerusalem Acres, including truck loads. Some of the cars bore a sticker of Fields of The Wood, which was my first program of making a scenic display of the Holy Bible. Now, Jerusalem Acres is speaking forth this great Vision in a more compact and simple manner, being portrayed in a replica of the Cross of Calvary. I did erect a cross in Fields of The Wood, but in that vision it only contained one section of the Vision of All. In Jerusalem Acres, the cross, 656 feet long, 294 feet wide, and placed on a seven-acre plot of ground is ready to speak and declare the Book of Revelation in its Vision of All.

This move made its forwardness on February 13, 1957, fulfilling another portion of the 60th chapter of Isaiah, “…and kings [shall come] to the brightness of thy rising.” The first two verses speak forth for Fields of The Wood, but the entire book of Revelation declares Jerusalem Acres to be in its completion, plus many, many, many other prophecies throughout the Holy Scriptures.

OUTSIDE RESPONSE TO JERUSALEM ACRES – In 1940, 1941, 1942, and 1943, at the opening of Fields of The Wood to the public, I was greatly amazed that travelers began to roll in so soon to see the bare place with only little wooden markers, and I had afore predicted in the messages of Field of The Wood as the power that it would contain to get the gospel to the world.

Now, I am astonished to see automobiles from all states and carloads from foreign countries rolling down Jerusalem Boulevard on Jerusalem Acres. These have heard about the new developments of the writing of the vision at Jerusalem Acres, the Scenic Display of the Bible. Now, with this world’s largest cross almost completed and reaching the public, our daily increasing visitors to Jerusalem Acres continue to be amazed at what is being done on the plot of ground.

FacebookTwitterSubscribe
Subscribe to receive all news to your email or phone: [wysija_form id="1"]
acresjerusalemvision

Now unto him that is able to do exceeding abundantly…

Now unto him that is able to do exceeding abundantly above all that we ask or think, according to the power that worketh in…