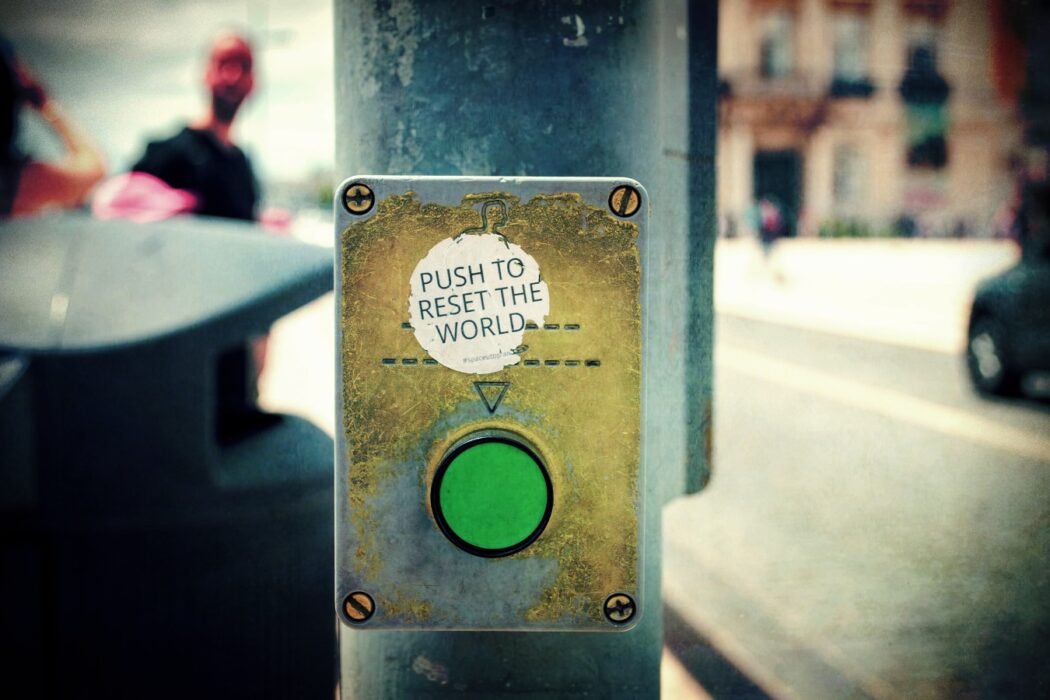 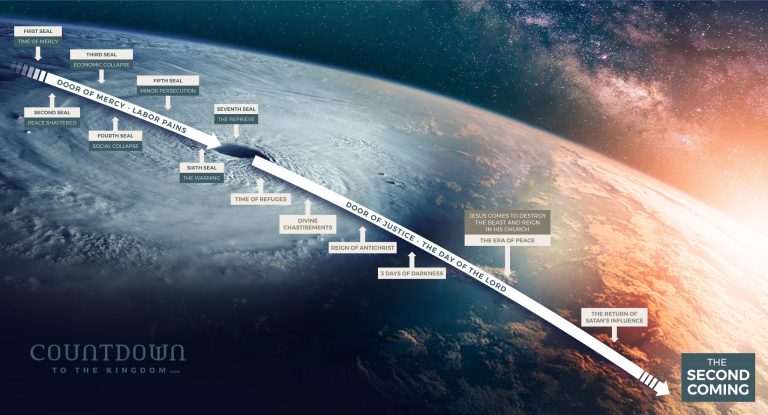 With the death of the last Apostle, Public Revelation ended. All that is necessary for salvation has been revealed. However, God has not ceased to speak to His creation! The Catechism of the Catholic Church states that “even if Revelation is already complete, it has not been made completely explicit; it remains for Christian faith gradually to grasp its full significance over the course of the centuries” (n. 66). Prophecy is God’s eternal voice, continuing to speak through His messengers, whom the New Testament calls “prophets” (1 Cor 12:28). Can anything God say be unimportant? We don’t think so either, which is why we created this website: a place for the Body of Christ to discern credible voices of prophecy. We believe the Church needs this gift of the Holy Spirit more than ever—a light in the darkness—as we countdown to the coming of Christ’s Kingdom.

The following Timeline is based on the Early Church Fathers’ interpretation of the Book of Revelation as it was handed on to them, and thus, their straight reading of Chapters 19-21. This is complimented by the magisterial teachings of the popes, the approved apparitions of Fatima, and supplemented by the “prophetic consensus” of various credible seers throughout the world.

Jesus gave a beautiful analogy that applies wonderfully to our times:

When a woman is in labor, she is in anguish because her hour has arrived; but when she has given birth to a child, she no longer remembers the pain because of her joy that a child has been born into the world. So you also are now in anguish. But I will see you again, and your hearts will rejoice, and no one will take your joy away from you. (John 16:21-22)

It is easy for a laboring mother to get caught up in the pain of the moment, the agonizing contractions that immediately precede the birth. Likewise, it is easy for “Mother Church” to become pre-occupied with the hard labor of present and coming cataclysms, persecution, and uncertainty. While we won’t water down here what Our Lord himself warned was coming (because He wanted us to be prepared, not afraid), neither do we want the reader to ever lose focus upon where we are headed. Ultimately, that is Heaven; but before then, Scripture and Heaven’s Messages, through chosen seers and visionaries, speak of a coming Era of Peace, the “birth” of the entire People of God when swords shall be beat into ploughshares, the wolf shall lie down with the lamb… and a “period of peace” will reign over the entire earth, from coast to coast. As Cardinal Mario Luigi Ciappi, papal theologian for Pius XII, John XXIII, Paul VI, John Paul I, and St. John Paul II said:

Yes, a miracle was promised at Fatima, the greatest miracle in the history of the world, second only to the Resurrection. And that miracle will be an era of peace, which has never really been granted before to the world. —October 9th, 1994, The Apostolate’s Family Catechism, p. 35

This Timeline is filled with the reality of many sorrows but also victories, joys, and ultimately, peace. That is because, what you are about to read, is the Passion of the Church that finds its end, not in death, but a new resurrection. Since it is the mother of the Church, the Blessed Virgin Mary, the “Woman clothed in the sun who labors to give birth,”[1]Rev 12:1 let us take her hand and ask her to walk with us through this Timeline: to teach, console, and prepare us, not as mere observers, but as holy combatants in the greatest battle in human history.

Then the legion of little souls, victims of merciful Love, will become as numerous ‘as the stars of heaven and the sands of the seashore’. It will be terrible to Satan; it will help the Blessed Virgin to crush his proud head completely. —St. Thérése of Lisieux, The Legion of Mary Handbook, p. 256-257

The essential thing to understand is that this phase of human history is man “reaping what he has sown.”

When they sow the wind, they shall reap the whirlwind. (Hos 8:7)

Several mystics have spoken of this time of great tribulation that is coming over the earth and compared it to a storm like a hurricane.

…you are entering into the decisive times, times for which I have been preparing you for many years. How many will be swept away by the terrible hurricane which has already hurled itself upon humanity. This is the time of the great trial; this is my time, O children consecrated to my Immaculate Heart. —Our Lady to Fr. Stefano Gobbi, Feb. 2nd, 1994; with Imprimatur Bishop Donald Montrose

You know, my little one, the elect will have to fight against the Prince of Darkness. It will be a terrible storm. Rather, it will be a hurricane which will want to destroy the faith and confidence of even the elect. In this terrible turmoil currently brewing up, you will see the brightness of my Flame of Love illuminating Heaven and earth by the effusion of its effect of grace I am passing on to souls in this dark night. —Our Lady to Elizabeth Kindelmann, The Flame of Love of the Immaculate Heart of Mary: The Spiritual Diary (Kindle Locations 2994-2997); Imprimatur by Cardinal Péter Erdö

Indeed, even Scripture uses this metaphor to describe a coming purification of the earth through a Great Storm:

…a mighty wind will rise against them, and like a tempest, it will winnow them away. Lawlessness will lay waste the whole earth, and evil-doing will overturn the thrones of rulers. (Wis 5:23)

Look, the Lord’s hurricane, his wrath, bursts out, a fearsome hurricane, to burst on the heads of the wicked. The Lord’s wrath will not turn back until he has done and achieved his purpose. In the final days, you will understand this clearly. (Jeremiah 23:19-20; The Revised New Jerusalem Bible, Study Edition [Henry Wansbrough, Random House])

Another analogy that both Jesus and St. Paul use are “labor pains.” Jesus described them as such:

Nation will rise against nation, and kingdom against kingdom. There will be powerful earthquakes, famines, and plagues from place to place; and awesome sights and mighty signs will come from the sky… all this is but the beginning of the birth-pangs… And then many will fall away, and betray one another, and hate one another. And many false prophets will arise and lead many astray. (Luke 21:10-11, Matt 24:8, 10-11)

Thus, the first half of this Storm, while permitted as God’s loving “discipline” in this Time of Mercy, is not the same as direct chastisements from Heaven, per se, but man essentially “doing it to himself” (in the same way a loving parent will allow a persistent child to “touch the stove” briefly to warn them of the danger):

God will send two punishments: one will be in the form of wars, revolutions, and other evils; it shall originate on earth. The other will be sent from Heaven. —Blessed Anna Maria Taigi, Catholic Prophecy, P. 76

This was predicted also in the approved apparitions at Fatima:

[Russia] will spread her errors throughout the world, causing wars and persecutions of the Church. The good will be martyred; the Holy Father will have much to suffer; various nations will be annihilated. —from the Third Secret of Fatima, The Message of Fatima, vatican.va

From the papacy’s perspective, these are not mere clashes of the human will, but a long diabolical plan rooted in “secret societies” to overthrow the present order:

At this period, however, the partisans of evil seems to be combining together, and to be struggling with united vehemence, led on or assisted by that strongly organized and widespread association called the Freemasons. No longer making any secret of their purposes, they are now boldly rising up against God Himself …that which is their ultimate purpose forces itself into view—namely, the utter overthrow of that whole religious and political order of the world which the Christian teaching has produced, and the substitution of a new state of things in accordance with their ideas, of which the foundations and laws shall be drawn from mere naturalism. —POPE LEO XIII, Humanum Genus, Encyclical on Freemasonry, n.10, April 20th, 1884

NATIONAL DAY OF PRAYER (MAY 2) This is a great season to kick off eight weeks of Pentecostal discipleship training & encouragement with ….