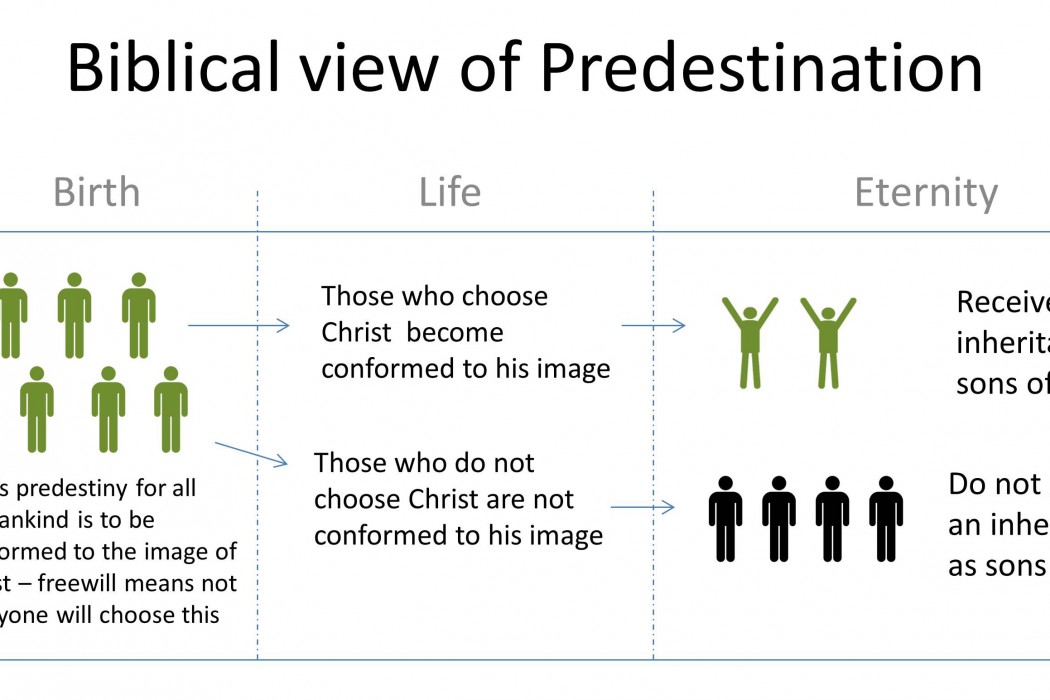 Answer: Romans 8:29-30 tells us, “For those God foreknew he also predestined to be conformed to the likeness of his Son, that he might be the firstborn among many brothers. And those he predestined, he also called; those he called, he also justified; those he justified, he also glorified.” Ephesians 1:5 and 11 declare, “He predestined us to be adopted as his sons through Jesus Christ, in accordance with his pleasure and will…In him we were also chosen, having been predestined according to the plan of him who works out everything in conformity with the purpose of his will.” Many people have a strong hostility to the doctrine of predestination. However, predestination is a biblical doctrine. The key is understanding what predestination means, biblically.

The words translated “predestined” in the Scriptures referenced above are from the Greek word proorizo, which carries the meaning of “determine beforehand,” “ordain,” “to decide upon ahead of time.” So, predestination is God determining certain things to occur ahead of time. What did God determine ahead of time? According to Romans 8:29-30, God predetermined that certain individuals would be conformed to the likeness of His Son, be called, justified, and glorified. Essentially, God predetermines that certain individuals will be saved. Numerous scriptures refer to believers in Christ being chosen (Matthew 24:22, 31; Mark 13:20, 27; Romans 8:33, 9:11, 11:5-7, 28; Ephesians 1:11; Colossians 3:12; 1 Thessalonians 1:4; 1 Timothy 5:21; 2 Timothy 2:10; Titus 1:1; 1 Peter 1:1-2, 2:9; 2 Peter 1:10). Predestination is the biblical doctrine that God in His sovereignty chooses certain individuals to be saved.

The most common objection to the doctrine of predestination is that it is unfair. Why would God choose certain individuals and not others? The important thing to remember is that no one deserves to be saved. We have all sinned (Romans 3:23), and are all worthy of eternal punishment (Romans 6:23). As a result, God would be perfectly just in allowing all of us to spend eternity in hell. However, God chooses to save some of us. He is not being unfair to those who are not chosen, because they are receiving what they deserve. God’s choosing to be gracious to some is not unfair to the others. No one deserves anything from God; therefore, no one can object if he does not receive anything from God. An illustration would be a man randomly handing out money to five people in a crowd of twenty. Would the fifteen people who did not receive money be upset? Probably so. Do they have a right to be upset? No, they do not. Why? Because the man did not owe anyone money. He simply decided to be gracious to some.

If God is choosing who is saved, doesn’t that undermine our free will to choose and believe in Christ? The Bible says that we have the choice—all who believe in Jesus Christ will be saved (John 3:16; Romans 10:9-10). The Bible never describes God rejecting anyone who believes in Him or turning away anyone who is seeking Him (Deuteronomy 4:29). Somehow, in the mystery of God, predestination works hand-in-hand with a person being drawn by God (John 6:44) and believing unto salvation (Romans 1:16). God predestines who will be saved, and we must choose Christ in order to be saved. Both facts are equally true. Romans 11:33 proclaims, “Oh, the depth of the riches of the wisdom and knowledge of God! How unsearchable his judgments, and his paths beyond
* My question is what do you all believe?

And
“if” So, ..
Then ..
Perhaps All The Warngs _xhortations And parables Could be seen as MORE THAN JUST FOR…
Since
his Forknowledge precedes our Responce To His Drawing.
And Predestining, At Least in Rom.

David Lavoie [08/22/2015 3:36 PM]
“IF” we look at Paul and his life’s work of explaining The Mystery of Christ ( The Summation of Humanity in Him) to both Jew And Gentile alike Could it make since That The “Us” He speaks of in Eph.1:5 is Jew And Gentile, And Through JESUS CHRIST As The Forordained Method of GOD’S Adoption?
WORK ON IT A LITTLE, It’s just a Different Lens.

John Kissinger [08/22/2015 4:07 PM]
Timothy D McCune the text does not say “salvation” BUT “predestined to be conformed to the likeness of his Son”

John Kissinger [08/22/2015 4:26 PM]
yeah, we should stop preaching from the dictionary and start preaching from the BIBLE “predestined to be conformed’ sure sounds like something that happens to saved people only. Unsaved cannot and do not get conformed to the likeness of the Son

Timothy D McCune [08/22/2015 7:22 PM]
Thanks , however I’m wondering if people here believe that Christians were predestined to be saved.

David Lavoie [08/22/2015 7:52 PM]
I Think All people Were Ceptin Those Few He’s hardened
His Word has many Refrences To His Glory being seen and understood, About His Love For All, About His Sacrifice For All.
Jesus Even Said That He did’nt Come To Condemn.

David Lavoie [08/22/2015 8:15 PM]
But God does Work Aforehand and probably knows Everything. 🙂 ..
So, It says people are condemned for loving Darkness Rather Than Light. John 3
I don’t Know How God could presuppose To Do something with Me And Then Do it. BUT he Does.
Never just MAKES IT HAPPEN, BUT WORKS TOWARDS MY OBEDIENCE, INTIMATLY, KNOWING EVERYTHING.
Man Must Choose.
Men And Brethren, What Must We Do?
Repent, and Be Baptised in The Name of Jesus Christ for the Remission of Sins, And You shall Recieve The Gift of The Holy Spirit.
For This PROMICE Is To You And to Your Children And to All Who are Afar off, As many as The Lord our God Shall Call.
He Calls,.. TRUE… But we are taught Encouraged and Exhorted to respond. ACTS 2:37&38
And with many other words He kept on exhorting Them. (Acts2.40) EXHORTATION IS A PERSUASIVE AND EMPASSIONED, Savory Plea to The will.
of Course God knows,.Ahead of Time,… 🙂
That’s Why He Equips and Sends.

Timothy D McCune [08/22/2015 8:18 PM]
I appreciate your response David Lavoie it’s great talking to a Brother on the other side of the world.

John Kissinger [08/22/2015 10:52 PM]
In general, Pentecostal / Charismatics are Wesleyan / Arminian believe in free will. Hence, they do not consider to be chosen-frozen as people are able to fall off and backslide from the faith. Furthermore, it has been pointed out in previous discussions in the group that Calvinistic systems are mostly incompatible with classic Pentecostal pneumatology, sotirology, eschatology and even christology http://www.pentecostaltheology.com/why-am-i-not-a-calvinist/

David Lavoie [08/22/2015 11:09 PM]
Both of Their Thinkin Can Go To Far.
Sola Scriptura And Norm Nomative Normata.
The Bible is the only Work That Norms itself.

John Kissinger [08/23/2015 4:11 PM]
Rom.8 predestined to be conformed Ephesians 1 predestined us to be adopted – nothing about predestined for salvation in these texts