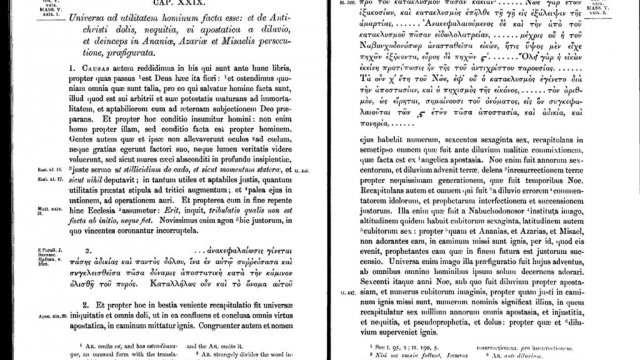 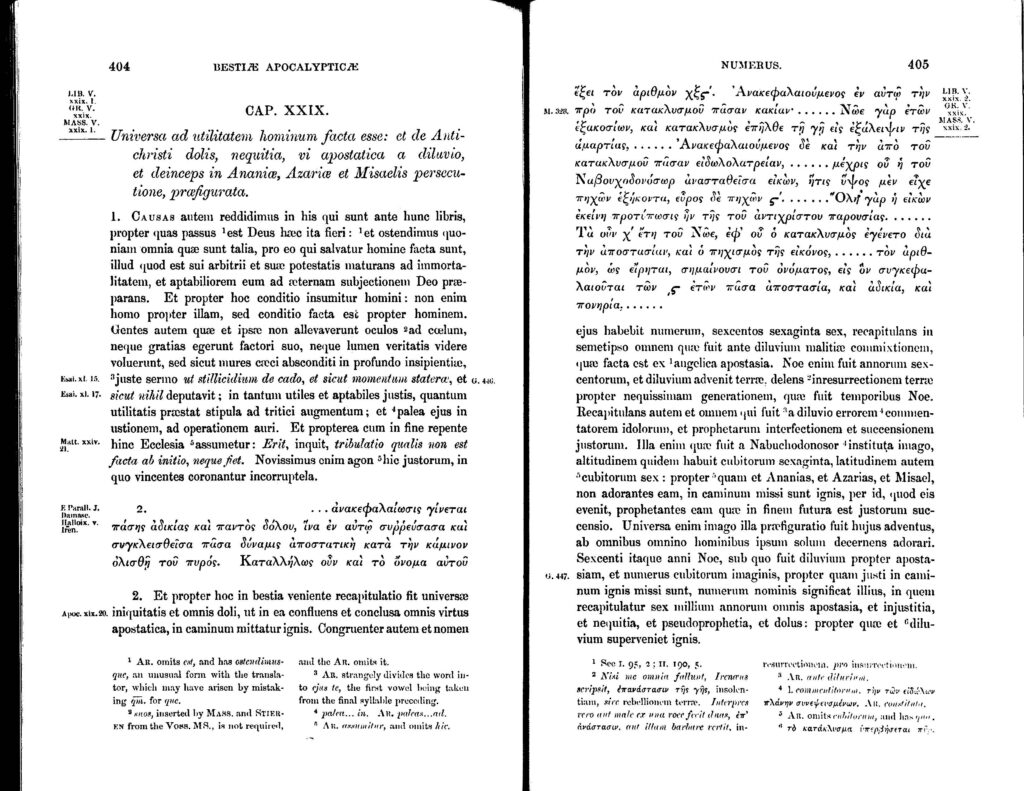 After reviewing Irenaeus’ ‘Against Heresies’ Book 5, I have removed my original comment and am replacing it with this:

Book 5 does render the Antichrist to come as reigning for 3 1/2 ‘years’.
This given scripture only ever refers to the period as ‘three and a half times’ in the Aramaic and Hebrew.
Irenaeus in the same chapter says it is believed that the Antichrist will reign for a long time.
Again this to me doesn’t suggest a mere 3.5 literal years.

In regard to the millennium, it does seem to me that Irenaeus expects a millennial reign after the return of Christ, something I disagree with on several grounds and have discussed elsewhere.

Now it has also been asserted (correctly) that Irenaeus was a contemporary of Polycarp and John.
While he would have been a child and possibly a young man when John was still alive, I have yet to see a reference that suggests he ever met either of them.

Irenaeus (130 A.D. – 202 AD) was a bishop of the church in Lyons, France. He was an eyewitness to the Apostle John (who wrote the Book of Revelation) and a disciple of Polycarp, the first of the Apostle John’s disciples. Irenaeus is most-known for his five-volume treatise, Against Heresies in which he exposed the false religions and cults of his day along with advice for how to share the Gospel with those were a part of them.

In his writings on Bible prophecy, he acknowledged the phrase “a time, times and dividing of times” in Daniel 7 to signify the 3 ½ year reign of the Antichrist as ruler of the world before the Second Coming of Christ. He also believed in a literal Millennial reign of Christ on earth following the Second Coming and the resurrection of the just.

On the subject of the Rapture, in Against Heresies 5.29, he wrote:

“Those nations however, who did not of themselves raise up their eyes unto heaven, nor returned thanks to their Maker, nor wished to behold the light of truth, but who were like blind mice concealed in the depths of ignorance, the word justly reckons “as waste water from a sink, and as the turning-weight of a balance — in fact, as nothing;”(1) so far useful and serviceable to the just, as stubble conduces towards the growth of the wheat, and its straw, by means of combustion, serves for working gold. And therefore, when in the end the Church shall be suddenly caught up from this, it is said, “There shall be tribulation such as has not been since the beginning, neither shall be.”(2) For this is the last contest of the righteous, in which, when they overcome they are crowned with incorruption.”

Irenaeus in this passage describes the church leaving the sinful world just before unprecedented disasters. Note his use of the term “caught up” which is Rapture terminology as that is the meaning of harpazo, the term for “caught up” in the King James Bible describing the Rapture in 1 Thessalonians 4. He then quotes Matthew 24:21 where The Lord Jesus Christ says: “For then shall be great tribulation, such as was not since the beginning of the world to this time, no, nor ever shall be.” And it is during this time that those who convert to Christianity during the final years will receive the incorruptible crown mentioned by the Apostle Paul in 1 Corinthians 9:25. In Irenaeus’ belief, the Rapture took place prior to the end times Great Tribulation.

Cyprian
Cyprian (200 AD – 258 AD) – Cyprian was Bishop of the church in Carthage. During his short stint as leader of the church, he guided the flock through intense persecution at the hands of the Roman Empire. In 258 AD after spending seven months of confinement to his home by order of Roman authorities, he was beheaded for his faith. Several of his works still exist today.

In Treatises of Cyprian he wrote in describing the end times Great Tribulation:

“We who see that terrible things have begun, and know that still more terrible things are imminent, may regard it as the greatest advantage to depart from it as quickly as possible. Do you not give God thanks, do you not congratulate yourself, that by an early departure you are taken away, and delivered from the shipwrecks and disasters that are imminent? Let us greet the day which assigns each of us to his own home, which snatches us hence, and sets us free from the snares of the world and restores us to paradise and the kingdom.”

Again we see use of language commonly found in reference to the Rapture as Cyprian describes the judgments of the end times as “imminent.” And he makes his belief on the timing of the Rapture when he wrote that Christians will have an “early departure” and be “delivered” from the devastating global judgments that come during the Day of The Lord.
In line with the Apostle Paul who wrote that “God has not appointed us to wrath, but salvation..” Cyprian expressed joy and encourages the believing reader to rejoice that the Church will be “taken away” before the disastrous Great Tribulation. Just as The Lord Jesus Christ in Matthew 24 used the same language of one “taken away” and the other “left.” Additionally Cyprian references the mansions which The Lord Jesus Christ promises to come back and take His believers to in John 14.

“Let not your heart be troubled: ye believe in God, believe also in me. In my Father’s house are many mansions: if it were not so, I would have told you. I go to prepare a place for you. And if I go and prepare a place for you, I will come again, and receive you unto myself; that where I am, there ye may be also.” – John 14:1-3.

As Beginning and End detailed in our article “The Red Moon Rapture – The Biblical Timing of The Rapture”, in both the Matthew 24 passages (“one taken, the other left”) and in John 14 (“..receive you unto myself..”) the Greek work paralambanō is used for taken and receive. The meaning of that word is “join to one’s self” indicating that Jesus is coming to fully unify with His church – which takes place at the Rapture. Clearly Cyprian believed and taught that the Rapture takes place before the Great Tribulation.

FacebookTwitterSubscribe
Subscribe to receive all news to your email or phone: [wysija_form id="1"]
believedirenaeuspre-tribrapture

Do you use YouTube Google Hangouts to broadcast #CHURCH?

CHURCH do you use YouTube Google Hangouts to broadcast your service? Here’s how to do it http://churchinfluence.com/one-handy-trick-recurring-or-scheduled-events-when-using-google-hangouts-for-churches/ @ourCOG via Churchinfluence Pentecostal Theology [08/11/2015 9:11…