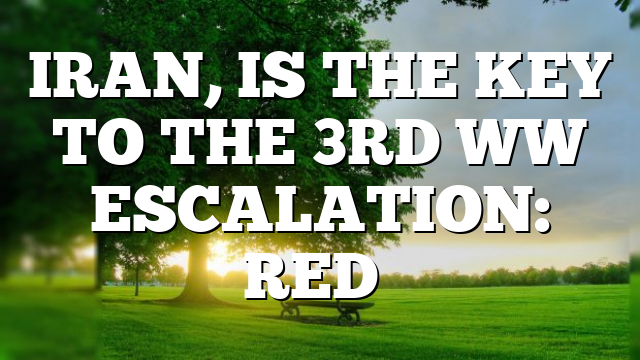 IRAN, IS THE KEY TO THE 3RD WW ESCALATION:

RED FLAG of WAR Raised over Iran’s most HOLY Mosque for the first TIME in History.

RED signifies BLOOD. What does this suggest in a terrible time such as this in our generation?

Does God’s word throws light on this event?

However, the fact remains that our lovely Heavenly Father God, didn’t leaves us without clues. Notwithstanding a lot of people’s stupidity, scriptural ignorance of the last days events, spiritual blindness and foolish arguments about, The TRUTHS that are so opened even for the blind to see. Here are some important information you need to know and also learn about Iran as a Nation and the way it was specifically revealed in codes, in the Bible PROPHECY. To start with, be informed that, Iran is one of the four Angels that were tied down in the River Euphrates which are codes for, four (NATIONS) to start,

“The great tribulation, THE LAST WAR ON EARTH or Armageddon”

Which is the same with, the ongoing war in Syria and some of the Middle East Nations since 2012. And the war is escalating on daily basis today the way it was rightly predicted. “The 3rd world war”. And surprisingly, Iran is the KEY or the trigger to the escalation of this war and the world leaders like, (President Trump) are very much aware of this great fact. So that’s one of the reasons or the major reasons why they’re somehow managing Iran’s HUGE arrogance and retaliation like, A PREGNANT WOMAN. Although, Iran is right in some ways only that God’s word must surely comes to pass as He has said it generations ago. So a country like America unknown to them are just working towards fulfilling the prophecies for their own DOOM.

The four Angels that are bound in the River Euphrates are,

And they have common sea relationships which is what the scripture means by saying,

“The four Angels were bound in the River Euphrates”

And inline with the scriptures like, Ezekiel 38 and 39, revelation 11, China, Russia and other Nations would later supports the four Angels to destroyed the foolish Covenant Nations such as, “America, Britain, Israel and the rest of them” and that time is now here.

And the sixth angel sounded, and I heard a VOICE from the four horns of the golden altar which is before God, Saying to the sixth angel which had the trumpet, Loose (release) the four Angels (NATIONS which are, Iran, Syria, Turkey and Iraq as I’ve already said) which are bound in the great River Euphrates. And the four Angels were loosed, which were prepared for The Hour, and The Day, (the month, and the year. 13 months Altogether. What the scripture is explaining to us is that, if the war fully spread tomorrow for an instance, it’ll last for 13 months) for to slay (kill) the third part of men. (2billion people or more globally will die and this terrible destruction is next in the prophecies calendar) and the number of the army of the horsemen were two hundred thousand thousand: (200million Russia land armies only) and I HEARD the number of them. And thus I saw the horses (WAR JETS) in the vision, and them that sat on them, having breastplates of fire, and of jacinth, and brimstone: and the heads of the horses were as the heads of lions; (but were not lions. War JETS as I’ve been explaining) and out of their mouths issued fire (gun fire which look as if it’s coming out from their mouth because of the GUN positions) and smoke (GAS) and brimstone (bombs or sulphur)

By these three was the third part of men killed, (2billion people or more) by the fire, and by the smoke, and by the brimstone (as IT has already been explained), which issued out of their mouths. (Not really from their mouth) For their power is in their mouth, and in their TAILS: for their tails were like unto serpents, and had heads, and with them they do hurt. And the rest of the men which were not killed by these plagues (chemical weapons during the 3rd world war) yet repented not of the works of their lands, that they should not worship devils (liars), and idols of gold, and silver, (money) and brass, and stone, and of wood: which neither can see, nor hear, nor walk: Neither repented they of their murders, nor of their sorceress, nor of their fornication, nor of their thefts. (All kind of evils still continues even after the END of the war. People didn’t still see any reason why they should start doing things right. … So sad).

This is what the FUTURE Holds for every Nation and us also as an individuals!