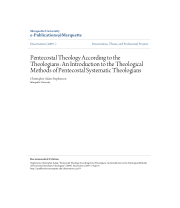 French L. Arrington is an ordained bishop in the Church of God (Cleveland, TN), within which he has significantly influenced theological education. He has served on the denomination?s board of education and its commission on doctrine and polity, in addition to devoting himself to pastoral work for over fifteen years. An accomplished scholar and author, he holds the Ph.D. in biblical languages with an emphasis in Pauline studies from St. Louis University, which he received under the direction of Keith F. Nickle (1975).19 Before retiring from full-time teaching, he was a member of the Lee University faculty, and from 1981 to 2002 he was Professor of New Testament Greek and Exegesis at the Church of God Theological Seminary, both in Cleveland, TN.