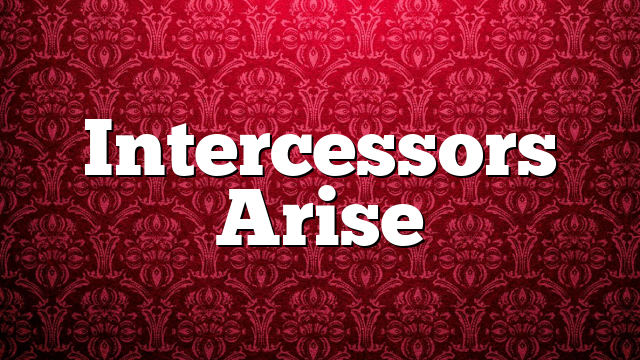 A Vision and a Call to Prayer – Ray E Horton

This is an exciting time of awakening. When you wake up out of complacency and come alive in Him, if you listen, He will lead you to intercessory prayer. We are all intercessors in the new covenant. I had a vision in my mind’s eye this morning in pre-service prayer that was both exciting and troubling. Before we came together to pray with our understanding, while praying in the Spirit, this was my vision:

I saw a big parade of believers stretching down the street as far the eye could see, worshiping and praising the Lord. As they passed by, everyone on the street, the homeless, the police officers, the casual pedestrian, was swept up and joined in with joy.

But inside the houses we passed were people sleeping, watching TV, reading the newspaper, playing games, doing all those things that aren’t necessarily bad, even good, but they were oblivious to the joyful parade going by outside their windows. Occasionally, my little group of corporate intercessors would stop by the side of the road, join hands and pray, as did some other little groups here and there. As we did, angels would come into the homes and wake and minister to the people, pointing out the parade, and many would join in with joy.

Rejoicing but Not Interceding

But the tragedy I felt was that only a few were praying, so angels were only reaching a few homes. I tried to get more of the paraders to join in, but they were too busy rejoicing in their own deliverance to even hear my pleas.

The parade was headed toward a huge park, a square, where a great prayer meeting was being held. The square was surrounded by troops and heavily armed riot police, but there was a powerful force field of faith around the park, and they couldn’t get at us. That force field also protected the street with the parade.

And a great voice cried out, “My people are destroyed for lack of knowledge.” And again, “Whom shall I send, and who will go for Us?” But most were so busy rejoicing they didn’t hear

But inside the homes, they were unprotected. In some homes everything seemed fine, but they were vulnerable, and sometimes were hit by sudden major sicknesses, family and financial tragedies. At intersections of the road, even the paraders were vulnerable and had to get across fast, shouting God’s Word, using the sword of the Word of God as protection. Some intercessors would supplement the angels and leave protection to warn those in their homes and get them out. Some made it, but some were martyred. Some in the park started to look back at their former lives, and went out, off on their own, and were at once picked off by the troops.

An Army of Intercessors Is Needed

And a great voice cried out, “My people are destroyed for lack of knowledge.” And again, “Whom shall I send, and who will go for Us?” But most were so busy rejoicing they didn’t hear. But a few, a remnant of the people, said “Here am I! Send me.” And I remembered the scripture, “Then He said to them, ‘The harvest truly is great, but the laborers are few; therefore pray the Lord of the harvest to send out laborers into His harvest.'” And I saw that yes, we are to go forth, but we first must come together to pray. Pray for laborers for the harvest.

I shared some of this with the group. Yes, when two or three are gathered in His name He is among them, and they are powerful. I also remembered the scripture that “one can chase a thousand, but two can put ten thousand to flight.” An army of intercessors is needed, and that is one area in which we are ALL called.

Victory Over the Flesh

VICTORY OVER THE FLESH – Ray E Horton God is able, if we are willing. Grace is a done deal. Jesus died on the…