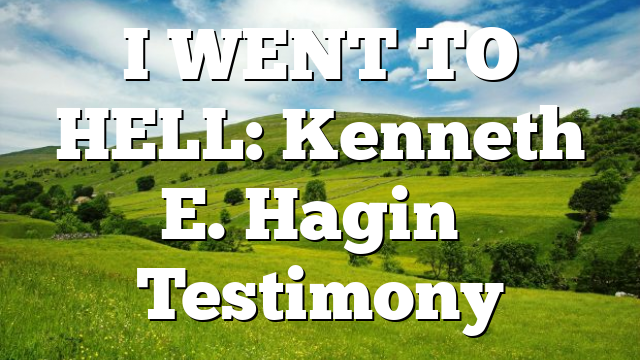 After I was raised off the bed of sickness as a 16-year-old boy, I used to preach in the school yard and on street corners in the marketplace. I would tell people, “Even if I didn’t have a Bible, I would know there’s such a place as hell.” I had been there, you see.

It happened at 405 North College Street in McKinney, Texas. It was a Saturday night. Just as my grandpa’s clock struck 7:30, my heart stopped.

I was lying in bed, bedfast. I had been sick all of my life with a deformed heart and an incurable blood disease. And at 7:30 that night, faster than I can say it, the blood ceased to circulate in my body, way down at the end of my toes. They seemed to go numb. This numbness spread to my feet, my ankles, my knees, my hips, my stomach, my heart—and I leaped out of my body, like a man would leap off a diving board into a swimming pool.

Although being baptized in water and
belonging to the church are right, it takes
more than that to miss hell and
go to Heaven.

I began to descend feet first—down, down, down. It was like going down into a well or a deep cavern. I could look up and see the lights of the earth flickering in the distance above me. They finally faded away, and darkness encompassed me.

It was a darkness so dark, you couldn’t see your hand if it was one inch in front of your nose. And the blackness was so dense, it seemed you could cut it with a knife. The farther down I went, the darker and hotter it became.

When I reached the bottom of this cavern of darkness (it took only a few seconds, but it seemed like eternity), I could see
fingers of light flickering, playing on the wall of blackness.

At the bottom of the pit was the entrance into hell itself. Then I saw what was causing the flickering light. Beyond the gates of hell were giant orange flames crested with white.

The pathway that led to hell’s gates inclined downward, and I just sort of floated toward those gates, unable to stop my descent. Somehow I knew that once I went through the gates, I could never come back, and I was afraid.

As I approached the gates of hell, some kind of creature met me. I kept looking straight ahead, my eyes riveted on hell, so I never looked directly at this creature, but I knew he was there.

I tried to slow down my descent, but the creature took me by the arm to escort me in. At that moment, from way above the darkness, a voice spoke. It was a male voice, but I don’t know what he said. It was a foreign language to me. This voice uttered only a few words, but the entire place—hell itself—shook from top to bottom.

When that voice spoke, the creature let go of my arm, and I began to float upward, toward the earth and away from hell. It was as if a great suction or magnet drew me upward from my back, and I began to ascend.

Before I reached the top of the pit, I could see the lights of earth once again. When I came up from that dark cavern, I was on the porch at 405 North College Street, just outside the south bedroom. I could see the giant cedar trees there in the yard, and I could see grandpa’s porch swing. Then I went right through the wall and seemed to leap inside my body like a man would slip his foot inside his boot.

This happened three times that night. The third time I began to descend into that darkness, I cried out, “God! I belong to the church! I’ve been baptized in water!” What I meant was, I was going in the wrong direction. But there was no answer—only the echo of my own voice through the darkness.

The second time I cried a little louder, “God! I belong to the church! I’ve been baptized in water!” But there was no answer—only the sound of my own voice echoing through the darkness.

The third time I literally screamed, “GOD! I BELONG TO THE CHURCH! I’VE BEEN BAPTIZED IN WATER!” But you see, although being baptized in water and belonging to the church are right, it takes more than that to miss hell and go to Heaven! The Bible says, “You must be born again” (John 3:3)! You must know Jesus Christ as your own Lord and Savior.

Seeing hell
will scare you so much,
you will want to get right
with God!

When I came to the bottom of that pit, the creature again met me and took me by the arm. I intended to put up a fight, if I could, to keep from going in. I only managed to slow my descent just a little.

Thank God that voice spoke again, and hell shook; it just trembled. And that creature took his hand off my arm. I came floating back up to earth. Only this time, as I ascended through the darkness, I began to pray, “O God! I come to You in the Name of the Lord Jesus Christ. I ask You to forgive me of my sins and cleanse me from all sin.”

When I leaped back into my body, my natural voice picked up my prayer right in the middle of a sentence. It was 7:40 p.m., so all of this had happened in 10 minutes. Momma had run outside the first time my heart stopped beating, and she was on the porch praying and calling on God at the top of her voice.

When I came back into my body the third time, she and I were both praying so loudly, they tell me that traffic was backed up for two blocks around our house! But I’ll tell you, when something like that happens to you, you get serious with God—and you can get loud! Seeing hell will scare you so much, you will want to get right with God! It scared me, and I made Jesus Christ my Lord and Savior that night. When I did, I was transferred out of the kingdom of darkness into the Kingdom of God’s Son, Jesus Christ (Col. 1:13)!
_____________
(Editor’s Note: This article was adapted from Kenneth E. Hagin’s books Classic Sermons and I Went to Hell.)

Microsoft has agreed to purchase 10 million strands of lab-created DNA from biotech company Twist Bioscience. “As our digital data continues to expand exponentially,…