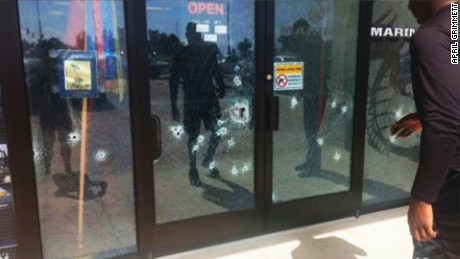 Pastor Randal H. Ackland glanced at his watch. Time was of the essence. He had less than 25 minutes before the church campus and daycare would begin teeming with parents dropping off their children. Less than 25 minutes to somehow disarm or bring about the peaceful departure of the disheveled and, at best, unstable gunman that was now sitting in the church foyer.

Ackland, 60, has been the pastor of South Attleboro (Massachusetts) Assembly of God for the past six years. The church, which runs about 450, has three main buildings, including the church facilities, Dayspring Christian Academy, and Liberty High School. Dayspring also offers daycare for preschool children.

Typically Ackland has Mondays off, but on Aug. 27, he needed to do a few quick things at the church. So, he and his wife, Connie, who works at Dayspring Christian Academy, drove to the church campus around 6:30 Monday morning.

After dropping Connie off, Ackland went to his office to gather a few things. Then, he headed for the adjoining sanctuary to retrieve a cable for his tablet that he had forgotten on Sunday.

“I entered the building and encountered this guy sitting in the foyer, holding a gun,” Ackland recalls. “He was shaking and sweating and pointing the gun at himself.”

At first Ackland thought the unkempt figure was a homeless person going through some kind of withdrawal. But something unusual happened after they surprised each other. After the initial shock of seeing him, the gunman “visibly relaxed.”

Stunned himself, Ackland simply asked the gunman, “Can I help you?” As the man was initially unresponsive, Ackland continued. “Can I call somebody for you and get you some help? It looks like you need some help — maybe a doctor, police, or counselor?”

The gunman affirmed that he needed some help, but was unwilling or unable to determine what kind of help he needed.

“I needed to buy some time to pray,” Ackland says, “so I told him that I was going to get the cable I had come in for, which was only about 30 feet away, and then we could continue talking.”

And pray Ackland did. God responded. “God told me that If the gunman didn’t want help, I could just ask him to leave.”

After collecting the cable, Ackland returned. He asked the gunman to put the gun away. He did, placing it into his pocket. He then asked him again what kind of help he would like — a doctor or counselor. The man couldn’t answer.

“Well, would you prefer to just leave?” Ackland asked, according to God’s prompting. “He told me, ‘That would probably be best.’”

As the man picked up two backpacks that Ackland hadn’t noticed before (which were later determined to contain an additional gun and numerous rounds of ammunition), Ackland asked the man how he got into the church. The man claimed he found a door not fully latched.

Ackland gave him his business card and told the man that he would like to talk to him sometime and to give him a call whenever he was ready. And then the man was gone, walking out of the church door and down the street.

Ackland glanced at his watch again. Three minutes, that’s all it was, but it may have been the longest three minutes of his life. Thankful for God’s protection, and a bit shaken, he called the police to report the incident. About 15 minutes later, two police officers in their cruisers located the suspect about a mile away . . . and that’s when God’s intervention and protection at the church campus became fully evident.

When the police gave instructions to the suspect — later identified as Eric Lindsey, 41, of Coventry, Rhode Island — he refused to listen and reportedly opened fire on the police officers. The officers dove out of their cruisers — just before bullets pierced the head rests of both vehicles — and returned fire.

Lindsey was struck multiple times, according to reports, with the officers disarming him. They then used their training to save his life. Currently Lindsey is under guard at Rhode Island Hospital in Providence.

The potential for a far more tragic outcome isn’t lost on Ackland — so many parents, so many children just minutes away from possibly encountering a gunman who seemed to be battling inner demons.

Yet from this potential tragedy, God has been lifted up in ways Ackland couldn’t have imagined.

“Our business manager has been interviewed 10 times and I have given four interviews,” Ackland says, “and each time, we gave God credit for His hand of protection — and that made the news.”

Although that statement may not seem to be of much note for those in the Bible Belt, Ackland says that it’s almost unheard of for God to ever be mentioned in a positive light on news reports in New England. What’s more, the news coverage has opened doors for conversation.

“The people of our congregation have been having wonderful conversations with their neighbors, our church name and sign has been all over the news, and this has prompted opportunities for good conversations about God, which, here in New England, is huge. Even the police chief and district attorney thanked God for His hand in the outcome . . . God has been getting a lot of glory for how it all worked out.”

Revelation of Heaven and Hell

INTRODUCTION But I will come to you in visions and revelations of the Lord. I knew a man in Christ fourteen years ago, whether…