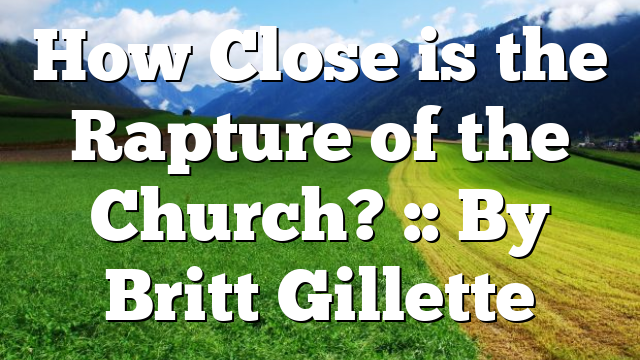 How close is the rapture of the church? I think we can get a good idea based on recent surveys of self-identified Christians in the United States.

Recently, The Christian Post reported, “Over a third of senior pastors believe ‘good people’ can earn their way to heaven.” This was the conclusion of a survey conducted by the Cultural Research Center at Arizona Christian University. The survey polled around 1,000 Christian pastors, examining dozens of beliefs they hold, and found only 37% hold a biblical worldview. The survey found 39% believe “each individual must determine their own truth,” 38% do not believe “human life is sacred,” and 37% believe “having faith, in general, is more important than in what – or more specifically, Whom – one has faith.”

Assuming this is true, it should come as no surprise to learn the people sitting in the pews of these churches hold similar views. In his blog post, “Barna: Most Americans Create a Customized Worldview,” Ken Ham states, “Seven out of 10 U.S. adults call themselves ‘Christians’ and yet only 6 in 100 (6%) actually have a biblical worldview.” He then went on to cite statistics from a recent Ligonier Ministries survey. Among its findings:

These beliefs don’t fit with what the Bible teaches, meaning those surveyed (who self-identified as “Evangelical Christians”) either haven’t read the Bible or they reject what it says. This “falling away” from the foundational beliefs of the Christian faith by those who profess to be Christians is an indication the world is on the verge of the seven-year Tribulation. And since the Bible tells us the rapture occurs prior to the Tribulation (Revelation 3:10; 1 Thessalonians 1:10; 1 Thessalonians 5:9), if we see signs and indications that we’re on the verge of witnessing the events of the Tribulation, we can know the rapture is even closer.

The Bible says the Day of the Lord (the Tribulation) will not come and the Antichrist will not be revealed until “a great falling away” happens first (2 Thessalonians 2:3). Some translations call this “a rebellion” or “apostasy” – an abandonment of the faith by professed Christians. Do these survey responses indicate a great falling away? They seem to.

However, by itself, this sign isn’t enough to indicate the nearness of the end times – and thus, the rapture. After all, it’s subjective. Some number of people have always professed to be Christians while denying the foundational principles of the faith. But on this scale? I don’t think so, but I can’t know for sure. That said, these surveys indicating a falling away from the faith are not the only sign telling us the end times and the Second Coming of Jesus Christ are at hand.

Jesus and the prophets gave us a number of signs to look for. Furthermore, and this is the key, Jesus said, “When you see all these things, you can know my return is near. I’m right at the door” (Matthew 24:33). This was in response to the disciples asking Jesus to tell them “the signs of your coming and the end of the age” (Matthew 24:3). In other words, Jesus said the #1 sign of His Second Coming and His return to establish His Millennial Kingdom is the convergence of the various signs He and the prophets said to look for. This is stated in three of the four Gospels – in Matthew 24, Mark 13, and Luke 21. Jesus said, “When you see all these things taking place, you can know that his return is very near, right at the door.” (Mark 13:29). He also said, “When all these things begin to happen, look up for your salvation is near!” (Luke 21:28).

The Bible is clear. The #1 indication Jesus will return soon is all the signs appearing together. Both Jesus and the prophets told us what those signs are, and the appearance of just one is reason enough to take notice. But the arrival of one sign after another demands your attention. It’s the sign Jesus said to look for. This convergence of signs confirms our generation will witness the Second Coming – not according to me, but according to Jesus.

The Convergence of Signs

A great falling away of those who profess to be Christians, but deny the foundational truths of Christianity, is just one of many signs. Jesus and the prophets pointed to dozens and dozens. This article cites only a few, but the reality of each one of these signs is undeniable. And their convergence should be enough to convince you the return of the Lord is close at hand. These signs include:

Israel Back in the Land – God promised to bring the Jewish people back into the land of Israel before He returned (Jeremiah 23:7-8). He said He would call them from “among the nations” (Ezekiel 39:28), from “the farthest corners of the earth” (Isaiah 11:12), and from “north, south, east, and west” (Psalm 107:3). He promised to welcome them home from the lands where they were scattered (Ezekiel 20:34). When they did, He promised to return and establish His everlasting kingdom (Isaiah 11:11-12).

The Gospel Preached Throughout the World – When asked about the end of the age and the signs of His coming, Jesus said to look for a very specific sign. He said the Gospel will be preached throughout the entire world. Every nation will hear it. And then? And then, the end will come (Matthew 24:14). For centuries after the crucifixion, the Gospel was confined to a small area surrounding the Mediterranean Sea. In the past two centuries, Christians have brought the Gospel to every nation in the world. Today, missionaries are in every nation. The Bible is translated into hundreds of languages, and the message of Jesus is sent around the world by radio, TV, satellite, and the Internet. This generation is on the verge of spreading the Gospel to every last person on earth.

An Increase in Travel and Knowledge – Six hundred years before Jesus, an angel gave Daniel a special message. He said “travel and knowledge” will increase in the end times (Daniel 12:4). For centuries of human history, dramatic gains in travel and knowledge did NOT take place. Yet the last two hundred years have seen explosions in the speed and frequency of travel as well as the amount and availability of knowledge.

Arrival of the Exponential Curve – Jesus said a variety of global signs will come before His return and the end of the age. These signs will be spiritual, natural, societal, and political in nature. He said they will appear in a distinct way – “like birth pains” (Matthew 24:3‐8). This means the frequency and intensity of these signs will increase as we near His return. Our generation has seen the exponential increase in war and famine Jesus said to look for. In the 20th Century alone, more people died from war and famine than lived on the earth when Jesus spoke these words.

Israel Surrounded by Enemies – The Bible says enemies will surround Israel in the end times. Those enemies will say, “Come, let us wipe away the nation of Israel. Let’s destroy the memory of its existence” (Psalm 83:4) and “Let us take for ourselves these pasturelands of God” (Psalm 83:12). Ezekiel said Israel’s neighbors will say, “God has given their land to us” (Ezekiel 11:14‐17), and “Israel and Judah are ours. We will take possession of them. What do we care if their God is there?” (Ezekiel 35:10). Ever since the rebirth of Israel in 1948, the daily headlines have included these Bible verses. Israel’s Muslim neighbors claim the land of Israel for themselves, and they have no regard for the God of Israel.

Israel’s Exceedingly Great Army – Ezekiel said, in the end times, Israel will field “an exceedingly great army” (Ezekiel 37:10). Zechariah said Israel will be like a fire among sheaves of grain, burning up the neighboring nations (Zechariah 12:6) and even the weakest Israeli soldier will be like David (Zechariah 12:8). Since 1948, Israel has fought no less than four conventional wars against its neighbors. Despite being outnumbered more than 50 to 1, Israel has achieved overwhelming victory every time.

Rise of the Gog of Magog Alliance – The Bible says a military alliance that includes Russia, Iran, Turkey, and a number of other nations will attack Israel “in the latter days” (Ezekiel 38:8) when God brings His people home from among the enemy nations (Ezekiel 39:27). Today, we see those very nations coming together for the first time – an alliance that has never existed in world history.

Rise of a United Europe – The Bible says a revived Roman Empire will come to power in the end times (Daniel 2, Daniel 7, Revelation 17). According to Daniel, it will be a ten-nation alliance of weak and strong nations. Some parts will be as strong as iron, while other parts will be as weak as clay (Daniel 2:42). We see the beginning of this alliance in the European Union – a coalition of weak and strong nations struggling to stay together.

Denial of the Signs – Almost two thousand years ago, Peter issued a warning. He said in the last days, people will mock the idea of Jesus returning. They will make fun of those who believe in the Second Coming and say exactly what we hear today – things like, “I thought Jesus was coming back? What happened to His promise? Generation after generation has said He’s coming. Yet, since the beginning of the world, everything has remained the same!” (2 Peter 3:3‐4).

The Hour is Late

It’s not true to say these signs have always been present. Generations of Christians lived and died without witnessing any of these signs. For centuries of Christian history, none of these signs were present. Zero. Today, they all are. Jesus said when you see these signs, you can know His return is near. He’s right at the door (Matthew 24:33). In fact, Jesus said the generation witnessing these signs will not pass away before He returns (Matthew 24:34). So despite the skeptics and naysayers, Jesus is coming, and ours is the generation that will witness His return. The convergence of all these signs confirms it.

This means the church is on the verge of the rapture. The rapture has always been an imminent, signless event. No preconditions are necessary for it to happen. However, as we approach the beginning of the Tribulation – a time period filled with numerous specific events – we’re running out of time for the rapture to come unexpectedly on the world. Jesus said, “You also must be ready all the time, for the Son of Man will come when least expected” (Matthew 24:44). By definition, Jesus can’t be talking about a time during or after the Tribulation. Once the events of the Tribulation begin to unfold, the glorious appearing of Jesus will be expected. He’s talking about the rapture before the Tribulation.

Furthermore, Jesus promised to keep us from “the great time of testing that will come upon the whole world to test those who belong to this world” (Revelation 3:10). This means if we see the events of the Tribulation just ahead and the rapture takes place beforehand, we’re extremely close to the rapture.

The signs of His return are all around us. Jesus is coming. If you’ve been waiting to share the Gospel with someone, don’t wait one minute more. You may not have another opportunity. The hour is late. The signs are present. Now is the season of the Lord’s return. So keep your eyes fixed on Him – Jesus is coming!

Britt Gillette is author of the free ebook Coming to Jesus as well as the books Signs of the Second Coming, Racing Toward Armageddon, and The End Times. Receive his book 7 Signs of the End Times for free when you sign up for his monthly newsletter.

The post How Close is the Rapture of the Church? :: By Britt Gillette appeared first on Rapture Ready.

How often do you SIN?