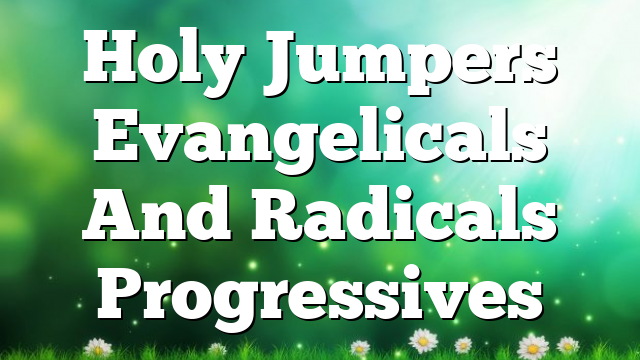 Te historiography of the nineteenth-century holiness movement typically traces its lineage to such ﬁgures as John Wesley, John Fletcher, Phoebe Palmer and the leaders of the National Holiness Association. Te movement has been widely regarded as conservative, a restate- ment of the doctrine and practices of Wesley and the early Methodists. Holy Jumpers recov- ers the story of radical holiness, a quest for uncompromising millenarian perfectionism that moderates disowned. Tracing its roots to Martin Wells Knapp, William Kostlevy (Tabor College) demonstrates that this radicalization came when Knapp embraced divine healing and premillennial eschatology.

Te Metropolitan Church Association, the most enduring expression of radical holiness, developed from the urban ministries of two Chicago business leaders: Edwin L. Harvey and Duke Farson. From their meteoric rise in the urban missions of the Methodist Episcopal Church, Kostlevy traces their encounters with the holiness movement in both moderate and radical forms. Among the moderates were such ﬁgures as Beverly Carradine and Henry Clay Morrison; radicals included Seth C. Rees and, especially, Martin Wells Knapp. Trough his extensive research, Kostlevy enables his readers to perceive the Holiness- Pentecostal tradition and many of its prominent leaders from an entirely new perspective.

Holy Jumpers recreates extensive connections among people, ideas, events, and move- ments through documented evidence, the result of painstaking archival research. Prior to this study, the “Burning Bush” (as the MCA was commonly known) remained a story the moderate holiness movement had forgotten — on purpose. Kostlevy unveils a history far more complex than has typically been articulated in previously published literature. Histo- rians have often regarded the holiness movement as a single entity, unwittingly perpetuat- ing the intentional amnesia of denominational moderates who thereby silenced the outspoken radicals. Te quest for Christian perfection in the Progressive Era was in fact prominently ﬁssured between a moderate wing associated with the National Holiness Asso- ciation, and a radical wing aligned with Knapp’s International Holiness Union and Prayer League and the MCA.

Kostlevy traces the roots of holiness radicalism to several factors that coalesced in the last two decades of the nineteenth century. He particularly emphasizes the importance of the MCA’s geographic setting, the city of Chicago, on its emergence and development, as well as Chicago Methodism’s embrace of middle-class culture and abandonment of immigrants and the working class. Furthermore, Kostlevy points out the parallels between holiness radicalism and the labor movement with regard to their advocacy of socialism. Both were responses to the concentration of wealth at the top of society, movements to empower and bring justice to working people. In this environment, the propagation of new doctrines such as divine healing and premillennialism ﬂourished. Kostlevy thus characterizes holiness radicalism as a modern movement that embraced new teaching as a vision for dramatically altering the present and establishing a just social order.

One of Kostlevy’s most important contributions is his unprecedented study of Martin Wells Knapp and Seth C. Rees as the progenitors of holiness radicalism. According to Kostlevy, Knapp and Rees would have been astonished at any assessment of their ministries

as conservative. Rather, their ministries embodied a revolutionary faith that appropriated modern culture as premonitory of the Second Coming of Jesus. Convinced that the Book of Acts served as a normative pattern for the Church, this new faith called for the “Pente- costal outpouring” of the Holy Spirit and regarded miracles, physical manifestations, and divine empowerment as eschatological signs of the imminent Parousia. Tese habits of thought and practice presaged the emergence of Pentecostalism from radical holiness ranks. Although Kostlevy draws convincing parallels between the doctrines and practices of the MCA and early Pentecostals, he goes farther and produces documented evidence based on archival research that MCA adherents joined the Azusa Street Revival, magnifying its inten- sity and augmenting its worldwide propagation.

Knapp and Rees explicated radical holiness in two inﬂuential books: Te Ideal Pentecostal Church (Rees) and Lightning Bolts from Pentecostal Skies (Knapp). Tese books, especially Knapp’s, set precedents for radical holiness advocates that included denunciation of com- promise (especially holiness moderates); inﬂammatory cartoons; and the advocacy of com- munalism as normative. Tese patterns were profoundly inﬂuential with regard to the MCA, whose adoption of these features enabled it to gain currency with the marginalized classes while earning disrepute among moderate holiness advocates.

Especially noteworthy is Kostlevy’s analysis of MCA’s interaction with modern culture. Bitter foes of worldliness and compromise, holiness radicals adopted marketing strategies of their era to promote their own message. Trough the leadership of F. M. Messenger, the MCA made a signiﬁcant impact on religious material culture through the Scripture Text Calendar. Kostlevy’s extensive research in the MCA Archives helps readers comprehend how internal politics — both alliances and conﬂicts — in turn impacted the long-term viability of the Calendar and its eﬀects on the group’s economic order.

Like Pentecostalism, the story of the Burning Bush remains a paradox: the product of earnestness that frequently spilled into fanaticism, the MCA excoriated secular culture and those who appeared to compromise with it. As the movement matured, ﬁnancial exigencies forced its leaders to moderate its faith and adapt to a changing world. By focusing on deci- sions of key leaders, Kostlevy shows how their autocratic style and ultraistic opinions alien- ated most of the membership and led to the MCA’s demise.

Holy Jumpers is far more important than simply a history of the MCA; Kostlevy opens a window into a neglected area of Holiness-Pentecostal Theology that decisively establishes their common roots. He reveals the Holiness-Pentecostal movements as far more ﬂuid and complex than previous studies allow. Moreover, he gives us “raw footage” from such events as the two General Holiness Assemblies of 1901 and the inter/intra-movement conﬂict that denominational histories usually minimize or ignore. One thing comes out of this study above all: those who share the Holiness-Pentecostal tradition should embrace their com- mon heritage and ﬁnd further ground for ecumenical conversation.

COULD September’s “Blood Moon” Be Biblical Sign Of Apocalypse?