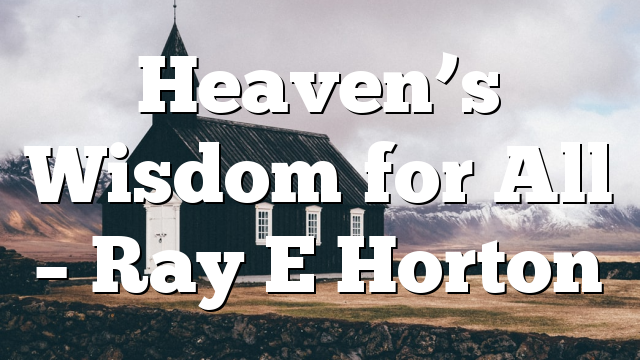 Heaven’s Wisdom for All, Not Just the Chosen Few – Ray E Horton

God did grant special people wisdom under the Old Covenant. Besides the wisdom of Solomon and others, take Joseph: “God granted him favor and wisdom in the sight of Pharaoh, king of Egypt, and he made him governor over Egypt and all his household” (Acts 7:10). But praise the Lord for the New Covenant. James tells us that godly wisdom is available to all of His children: “If ANY of you… lacks wisdom, let him ask God, who gives generously to ALL without reproach, and it will be given him” (James 1:5).

“If ANY of you lacks wisdom, let him ask God, who gives generously to ALL without reproach, and it will be given him”

I love Paul’s treatment of wisdom in 1 Cor. 1, 2 and 3, where he uses the words wisdom or wise 27 times to clearly distinguish between worldly and godly wisdom. While the Jews sought signs, the Greeks idolized the world’s wisdom, and Paul explained it to the Greek believers of Corinth. “For Jews demand signs and Greeks seek WISDOM, but we preach Christ crucified, a stumbling block to Jews and folly to Gentiles, but to those who are called, both Jews and Greeks, Christ the power of God and the WISDOM of God” (1 Cor. 1:22-24). It is in Christ that we find the wisdom of God, as well as the power.

Paul was sent to preach, but “not with words of eloquent WISDOM, lest the cross of Christ be emptied of its power. For the word of the cross is folly to those who are perishing, but to us who are being saved it is the power of God” (Vs. 17-18). Not only is worldly wisdom foolish, the wisdom of God is foolishness to the world: “But God chose what is foolish in the world to shame the WISE” (Vs. 27). Paul made a point of not preaching with lofty, worldly wisdom “so that your faith might not rest in the WISDOM of men but in the power of God” (1 Cor. 2:1-5).

God’s wisdom is hidden to the world, but can be imparted to believers, those who are mature, through preaching, as well as through prayer as James explained.  Paul said that “among the mature…we impart a secret and hidden WISDOM of God, which God decreed before the ages for our glory. None of the rulers of this age understood this, for if they had, they would not have crucified the Lord of glory” (Vs. 6-8).

To the unbelievers and the immature, they want to cling to their own wisdom, which James calls “earthly, unspiritual, demonic” (James 3:15), rather than pray for God’s wisdom or listen to godly preaching.

“Let no one deceive himself. If anyone among you thinks that he is WISE in this age, let him become a fool that he may become WISE. For the WISDOM of this world is folly with God. For it is written, He catches the WISE in their craftiness, and again, The Lord knows the thoughts of the WISE, that they are futile” (1 Cor. 3:18-20).

Praise God!  We have a better covenant, and we can ALL now chose to be one of the chosen to live in heavenly wisdom as we yield our own.

Did you know that the prophetic transformed the nation?

Did you know that the prophetic transformed the nation of Jamaica before even Azusa Street? John Kissinger [12/06/2015 4:11 PM] There’s a reason for…