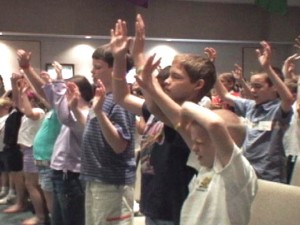 Growing up Pentecostal, I quickly realized that the phrase signifies an amalgam of different movements, church bodies, and theologies, which are related by a common belief in glossolalia and various cultural phenomena. The matter is only complicated further when one factors in the Charismatic Movement, in which the Pentecostal Movement is often lumped. Both terms can mean extremely different things. In fact, I propose that the meaning of these terms can only be determined by context. Example: A Pentecostal may distinguish himself from a Charismatic, despite the fact that both share a belief in glossolalia, because he feels that the term Charismatic denotes a wild, flakey, and fake Pentecostal imitation. However, a Charismatic, unlike the above example, is very reserved and distinguishes himself from the Pentecostal Movement, for the same reasons given above by the Pentecostal.

The PM has an ecclesial and historical solidarity, which is lacking in the CM. That being said, heresies which exist simultaneously in both the PM and CM, are not dealt with by the denominations. I propose the vagueness of the terms Pentecostal and Charismatic are in part to blame for this. Granted, Independents can hardly enforce any sort of doctrinal reforms, but the denominations have an infrastructure in which reforms could be enacted. Both Benny Hinn and A. J. Thomlison bare the name Pentecostal, but obviously only one is orthodox. But, perhaps some people do not consider the orthodoxy of any given teacher or doctrine, but only see that they bare the title Pentecostal and think all is well? The denominations are in a place to enact educational reforms for their clergy—to instruct them concerning the prosperity gospel, WoF, and other modern heresies. The instructed clergy, then could reeducate their congregations. I feel this would greatly help the denominations and would help Pentecostals remove the “heretic” stigma they’ve received as of late. People need to know that a Pentecostal, is not a Pentecostal, is not a Pentecostal. Thoughts?

Rick Wadholm Jr [09/11/2015 8:39 AM]
If only it were so simple. However one strong element found among many Pentecostals is independence. And many (likely most) of our fellowships function cooperatively rather than by edict.

John Kissinger [09/11/2015 9:05 AM]
wow wow wow – not sure which Pentecostal church you grew up but if did not have holiness and sanctification along with the said “common belief in glossolalia and various cultural phenomena” – not sure how to put it nicely, but you may have not grown up as Pentecostal…

Henry Volk [09/11/2015 9:06 AM]
Perhaps then someone could create an organization that could propagate awareness lol. The orthodox doctrine awareness propagation organization. Lol

Henry Volk [09/11/2015 9:07 AM]
That’s something else which binds Pentecostals, or at least those connected to the historic denominations.

John Kissinger [09/11/2015 10:20 AM]
well you did not mentioned sanctification in your original post so it had to be pondered upon just to be sure

Can the church or should the church “define” these terms in ways that are so confining to a generation. God unlocks truth thru the ages as he told Daniel to seal it up. Dan. 12:9.

Henry Volk [09/12/2015 7:50 AM]
Tim, I don’t believe God reveals new truths throughout the ages. The Holy Spirit guides the Church, which is different than revelation of new truth, since the faith was once for all given to the to the saints [Jude 1:3]. The Holy Spirit does help the Church define truth. Definitions have expanded throughout the centuries, but the substance of the truth has remained the same.

Tim Anderson [09/12/2015 8:38 AM]
Henry, I would humbly explain my understanding of “revealed truth” as this. God told Noah to build the ark, he did it – then after 120 yrs passed and the ark was built, God gave Noah addl. instructions. The truth was always the same, but the timing required God to give addl. information as it was needed.

My N.T. example is from the book of Acts when it was foretold that a famine was going to happen, Acts 11:28. which was pertinent to those living at that time. and 1 Pet. 1:20: “He was foreknown before the foundation of the world but was made manifest in the last times for the sake of you” (ESV) God had prepared Jesus before the foundations of the world to be the sacrificial Lamb yet it was not specifically disclosed until Jesus came.

Amos from O.T. says this: “For the Lord GOD does nothing without revealing his secret to his servants the prophets.” (ESV)
Truth never changes but the times do.

Henry Volk [09/12/2015 9:39 AM]
I don’t deny that there was progressive revelation, but the culmination of revelation is in the deposit of faith given to the apostles

FacebookTwitterSubscribe
Subscribe to receive all news to your email or phone: [wysija_form id="1"]
growingpentecostalrealized

Cultural Marxism and the Postmodern Church