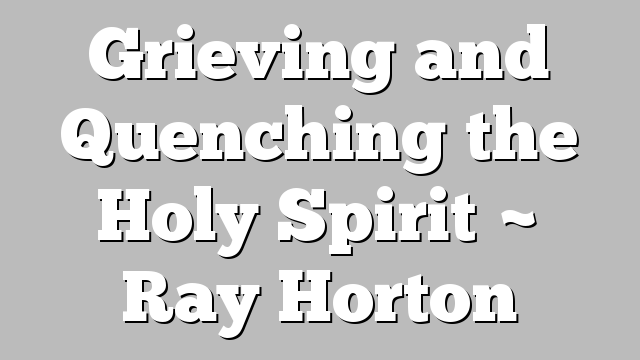 “And do not grieve the Holy Spirit of God, in whom you are sealed for the day of redemption” (Ephesians 4:30). The Holy Spirit is a person who can be grieved. Living carnally after receiving the Holy Spirit and the power to overcome certainly grieves Him. Afte…r the great price Jesus paid to redeem us, Christians living like the world (as is written about from Eph. 4:25-31) saddens our Lord.

Quenching the Holy Spirit is something different. Paul writes, “Do not quench the Spirit” (1 Thess. 5:19). Quenching means to put out a fire. We received fire with the Holy Spirit, and when we ignore it, it can be quenched, or the flames can be suppressed. We can quench the Holy Spirit when we don’t listen to that “still small voice” within. As soon as we stop listening, the flames die down, and may eventually go nearly out unless we once more fan the embers.

We Need the Fire

Ever hear the expression, “on fire for God?” Without that fire, we can be lukewarm. We need to fan the flames by prayer, praise and worship and seeking revelation from the Word. It is the fire of God that motivates and emboldens us. God does not force Himself on us, usually acting in our lives only when we willingly yield to Him. His action in our lives is limited when we are not sensitive to the Holy Spirit.

Attitudes that keep us from appreciating and using our prayer language, despising prophesy (1 Thess. 5:20), and not allowing the gifts of the Spirit to be manifest, quench the fire, the potential for the Holy Spirit to move both in our individual lives and in corporate worship.

And, tying the two words together, when we diminish the wonderful gifts of the Spirit in our lives, not being available to be used in them, the Spirit is quenched, and He is surely grieved as well.

I have to wite a essay on the history of the pentecostal church, can anyone recommend a book? Preferably from the UK Liberty Gilham…