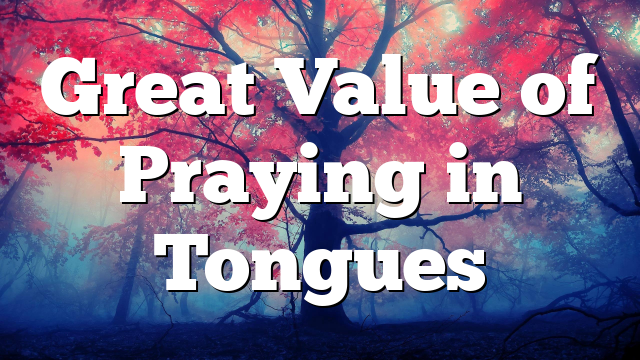 The Lord is showing me like never before the power of our prayer languages (devotional tongues, as it is sometimes called). One morning at church, a sister’s powerful testimony, and something awesome the Lord showed me at pre-service prayer, both confirmed this.

At pre-service prayer, we spend 15 minutes praying in the spirit independently. Then we come together and pray in agreement with our understanding for another 15 minutes. Quite a few months ago the Lord led me to weekly ask Him what it was He was praying through me in the spirit. Each week He’d give me just one word, then elaborate on it to my heart. I’d then share that to start us off in our united time of prayer.

This time I was surprised. When I asked Him, I heard the number 8, and saw a big 8 in my mind’s eye. I asked Him what that was about, and He clearly spoke to my heart that 8 people now live because of that time I spent in the spirit.

Let us not take our prayer language for granted but use it all the time, especially during the dark times in the world, where it can make a difference

That was exciting but different, so I asked Him if He really wanted me to share that with the prayer team. I got a definite “Yes” in my spirit, with the Lord indicating to me that believers do not fully appreciate or understand the mighty power of Holy Spirit praying though us when we pray with our prayer language.

When I shared this, the team was blessed, and we briefly discussed before starting to pray whether the Lord meant 8 people now live spiritually, being Born Again, or literally live physically, with lives being saved. The sense I had was the latter.

After prayer, just before the service, a sister we have been praying for concerning a family situation came up to me and excitedly shared a testimony. Her mother had a stroke, and despite prayer, things didn’t look good at the hospital until faith rose up in her heart and the Lord gave her boldness to pray in tongues over her mother. Not only was she healed of stroke symptoms, the doctors asked why her mother was on diabetes medication since there was no sign of diabetes, a second miraculous healing. I shared what the Lord had spoken to me at pre-service prayer. The two events encouraged both of us concerning the great value of praying in tongues.

Using it for intercession

The power of praying in tongues – so much greater than we even imagine. Let us not take our prayer language for granted but use it all the time, especially during the dark times in the world, where it can make a difference. It is not just a gift for us but a gift of service, to be used for others in intercession.

TODAY IS PALM SUNDAY by Luchen A. Bailey, Director of Ministerial Development CA/NV, Retired http://andnowyouknowmore.blogspot.com In the accounts of the four Gospels, Jesus’ triumphal entry…