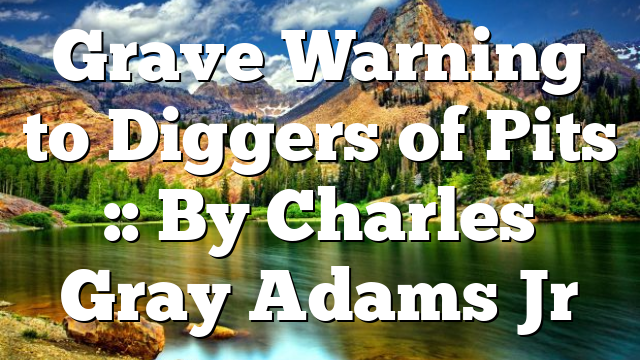 On more than one occasion, Scripture provides a grave warning to those who desire to bring harm to the righteous. King David, in the seventh Psalm, testifies that the mischief one devises against the righteous will inevitably turn upon those who devise the evil, and the ill intent they had for others will be meted out upon themselves. False religions call this karma; however, Scripture establishes this as the law of divine retribution. Notice this ‘divine retribution’ comes from God, and He is a just judge who knows exactly what to do in every circumstance. This means diggers of pits, those who dig pits for others to fall into, will actually succumb to their own devices, which will be as severe as they intended. Thus, this “Grave Warning to Diggers of Pits.”

Over the past few weeks, in several articles, it has been established that SIN is abounding, [1] because godlessness is returning at an alarming rate. [2] This has been shown to be the result of the rise of reprobates and false prophets and teachers, all of whom we have learned that we are to pray for. [3] Thus, moving us out of the way of God’s vengeance. [4] Therefore, we would be remiss if we did not examine the danger involved for those on the other side of this issue. What will happen to those who refuse to repent, those that choose to remain in a sinful, godless state which is marked by reprobation? The simple answer, they will fall into the hands of the just judge, God Almighty.

Though many are reprobate, there is a distinct group in mind in this article: those who go above and beyond to bring harm to the righteous; these are the diggers of pits to whom this grave warning is being issued. The remnant believer sees this group as those who desire to bring about the ‘Great Reset,’ which is actually a code word for the coming ‘One-World Government’ (Rev 13). [5] This could be considered the greatest pit ever dug, and it is designed to bring all of mankind under the sway of the evil one, the antichrist. Words cannot describe the utter horror and shock these will experience when they finally realize they have been snared by the very situation they have themselves created. We can only pray they will heed this warning before it is too late.

Let’s begin by defining a law that is established in God’s Word, the law of divine retribution. God first established this law when he called Abraham, then named Abram, out of his own country:

“Now the LORD had said unto Abram, Get thee out of thy country, and from thy kindred, and from thy father’s house, unto a land that I will shew thee: And I will make of thee a great nation, and I will bless thee, and make thy name great; and thou shalt be a blessing: And I will bless them that bless thee, and curse him that curseth thee: and in thee shall all families of the earth be blessed.” emphasis mine

This law is also presented in the New Testament:

Holman Bible Dictionary defines ‘divine retribution’ this way: “The process of God’s meting out merited requital—punishment for evil or reward for good. Retribution involves the act of paying someone back according to their behavior.” [6] Notice that divine retribution works both ways, good for good and bad for bad. Therefore, the Words of Jesus in what is now called the ‘Golden Rule’ are extremely pertinent:

“Therefore all things whatsoever ye would that men should do to you, do ye even so to them: for this is the law and the prophets.” [7]

Perhaps the most poignant of examples of this law in action is found in the narrative of Mordecai and Haman, which is found in the book of Esther. Mordecai was a righteous man, and Haman was evil. These traits were borne out by their actions. Mordecai saved King Ahasuerus from a plot to kill him by warning Esther, who then warned the king (Esther 2:21-23). Haman, on the other hand, desired to kill off the entire Jewish race simply because Mordecai would not bow to him. Clearly, Mordecai was selfless, and Haman was selfish. Interestingly, these two individuals could stand as a type and shadow of the current situation in the world.

One shrinking group (the remnant church) is selfless, made so by following the King of Kings and Lord of Lords, Jesus Christ. The other burgeoning group (all who reject Christ) is selfish, and this manifests in their actions toward all who oppose their mindset. Just like Haman desired to kill the Jews (all of them), this rising group of reprobate pit diggers desires to persecute and kill the most righteous among them. Sadly, they will not realize for some time that the absence of the righteous, fully realized at the rapture, will bring upon them the snares they had devised for those who would not bow to them. Ironically, just like Haman, who ended up impaled upon the very gallows he had erected for Mordecai, those who are seemingly prospering in their wickedness will soon pay dearly for their rebellious ways. Hosea speaks of this:

“Ye have plowed wickedness, ye have reaped iniquity; ye have eaten the fruit of lies: because thou didst trust in thy way, in the multitude of thy mighty men.”

Many pit diggers who trust in their own plans and strength have risen to the greatest positions of power, just like Haman. In fact, Haman look-a-likes (in action) can be seen in governance of seemingly every nation on earth simultaneously. This should be considered very concerning. However, to the remnant Christian, this happenstance is exhilarating on a level never before experienced. This is because this is one of the many signs that the Lord is soon to remove His bride from earth. [8] In fact, because the bride will not suffer from the ravages of the Tribulation, seeing the establishment of the beast system is a clarion call to look up. However, those who are busy devising devious plans for the righteous could not be more unaware of their impending doom. They will soon fall into the pits they have dug.

This is a plea directly to those who are currently digging pits for the righteous. The surest way for you to avoid the pitfalls created by your rebellious actions is to repent (turn from your wicked ways). This means you must first come to the realization that you have need of a Savior (Rom 3:23; 6:23). Then you must call on one whose strength far surpasses your own. In other words, you must realize that the all-powerful God did, in fact, send His only begotten Son to die for your sins, then call upon His name (John 3:16; Rom 10:13). You can rest assured that He paid the price for all of your sins, even the sins of digging pits. Paul is a great example of this; he formerly persecuted and killed Christians, and God not only forgave him, He used Him mightily.

Note to the Christian about this last point. Stephen was being stoned while Paul watched. Do you remember his last words? Here is a reminder:

“And cast him out of the city, and stoned him: and the witnesses laid down their clothes at a young man’s feet, whose name was Saul. And they stoned Stephen, calling upon God, and saying, Lord Jesus, receive my spirit. And he kneeled down, and cried with a loud voice, Lord, lay not this sin to their charge. And when he had said this, he fell asleep.” emphasis mine

Perhaps this prayer by Stephen is the very prayer answered by which Paul was eventually saved and used by God to further the gospel to the formerly unknown mission field of the Gentiles.

Great judgment will soon fall unexpectedly upon those who believe they are so cleverly devising plans to overcome their arch-enemies, the righteous, who would dare not bow their knee to the ungodly ways being propagated by the wicked. This judgment period, called the Tribulation, will last seven full years and see a vast amount of the populace destroyed. Incredibly, this destruction will come as a result of the law of divine retribution, as God will judge the wicked who fail to repent. Therefore, this may be the last “Grave Warning to Diggers of Pits.” Today is the day of your salvation. Repent Now!

Unfortunately, those who fully embrace the reprobate mindset are very unlikely to read this warning. However, many of the remnant may, and this is very encouraging because God has chosen to place many of the righteous in the enemy’s camp so that they may, at His leading, speak the truth which may set these, the most hardened of captives, free. Paul is the perfect example of this. In fact, his trip to Rome and imprisonment actually led to the salvation of many who were previously out of reach. This is proven by those he called ‘saints’ that were of the household of Caesar (Phil 4:22). The key to Paul’s success is he never wavered in his faith regardless of the persecution and suffering he endured. We must follow his example and persevere when assigned a difficult task by our maker, even amongst those who dig pits.

“Thou therefore endure hardness, as a good soldier of Jesus Christ.”

[2] For greater understanding, see the article, “The Return of the Godless.”

[3] For greater understanding, see the article, “The Rise of the Reprobates.”

[5] For greater understanding, see the article, “The Ultimate Mandate: The Mark of the Beast.”

[7] “Unless otherwise noted, all biblical passages referenced are in the King James Version.”

[8] For greater understanding, see the article, “The Five W’s of the Rapture.”

Demon Possession and Deliverance as a Ministry in the Church Today

Several weeks ago Pastor David M. Hinsen contacted the group for some materials on demon possession and deliverance as a ministry in the church…