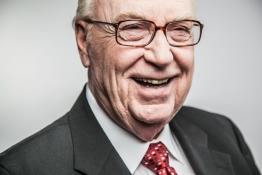 Clay received 2,079 of the 2,692 votes in the final ballot, topping Richard W. DuBose and John E. Lindell. Wood warmly welcomed a visibly choked-up Clay and his wife, Gayle, to the stage following the vote.

“It’s incredibly overwhelming,” Clay said. “I suspect you’d agree with me it’s difficult to find the right expressions in times like this, so I first of all want to say thank you for your expression of confidence. We accept this as the will of the Lord and will do our absolute best to fulfill this. … I would ask that the applause and the affirmation for our current superintendent, George Wood, be louder than the appreciation and the welcome of us, because this is one classy man right here.”

Loud applause broke out in the auditorium for Wood, including whoops and whistles. Clay asked the audience to honor the Wood family for their years of contributions to the Assemblies of God worldwide.

“I would never try to fill the shoes, but I certainly would try to build upon what a great foundation and structure, Dr. Wood, that you and others have given in this role,” Clay said. “So again, we love you and we appreciate you. Thank you very much.”

Following Clay’s remarks, Wood wished him a heartfelt congratulations and said the best days were yet ahead for the Assemblies of God. Multiple rounds of voting took place earlier that day. Wood participated in at least one of those rounds of voting before removing his name from the ballot. After Clay’s strong performance, one source suggested Wood “felt this was indicative of a different direction.”

What scoffers viewed as a weird babble…