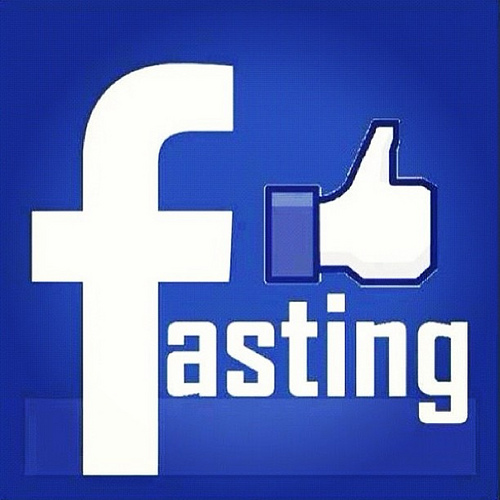 I decided to fast from Facebook. Not a whole week of course. Just a few days for starters. It was a piece of cake!

No, literally. I had all the cake I wanted. With milk and with soda. Then, I had it with soda and milk.

When Facebook came to mind the first time and I was really tempted, I just got on my bike and rode to the best BBQ this side of the Mississippi. Had me two plates topped with bacon. The Facebook temptation went away at once.

Then, I decided to go for some sushi. Buffet line of course. Best sushi on this side of the Atlantic. They were a bit fishy though, but no Facebook temptation at all.

When I got up in the morning (after my prayers of course), I went for my habit of coffee and Facebook. But this fasting thing allowed for a double plate of biscuits and gravy, so I had them with my coffee instead of Facebook. Topped it with extra spicy sausage just incase Facebook wanted to tempt me some more.

Fasting lunch was even easier. What were them big ol’ stakes called that they used to have at Outback? Our ol’ country store has them a bit bigger than the one in Amarillo, but instead of land rovers, we call ‘em landers. Like in: land me two on this plate over here, please. Yes, they do look like flat earth to me.

Have to tell ya’ll, Facebook did not come to mind till about the end of the second one and the tater topped with salty butter, plenty of sour cream and some refried bacon bits of course. I had to chase that Facebook temptation with a double slice of country backed apple pie. Put 30 seconds in the microwave and covered with three scoops of moose track ice cream, please. M-m-Mamma, stuffed my face like Russian Olympic athletes with fresh dope. Facebook what?

I will stop here and not tell you what I ate for supper. Mainly because it was so much I can hardly remember it all. Pretty sure, will post the menu in his secret group nobody is supposed to know about, but everybody does. So next time you decide to fast from Facebook, don’t post your decision on Twitter or Instagram. Instead, you should fast from some gossip for a change.

FacebookTwitterSubscribe
Subscribe to receive all news to your email or phone: [wysija_form id="1"]
facebookfasting

Are Paradise (Abraham’s bosom) and heaven the same thing?

I already know the answer to his question, but I’m gonna ask it anyways: Are Paradise (Abraham’s bosom) and heaven the same thing? William…