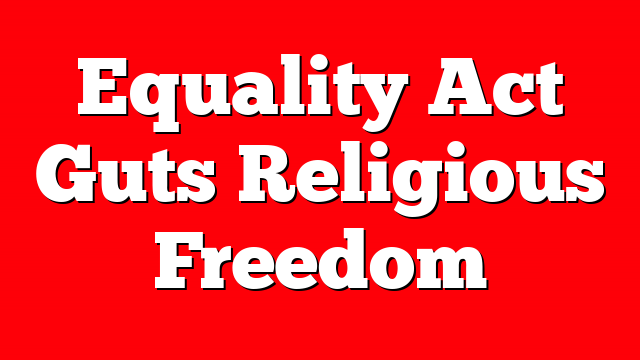 The U.S. House is expected to begin voting tomorrow on HR 5, known as the so-called “Equality Act,” which takes the unprecedented step of eliminating the Religious Freedom Restoration Act of 1993 (RFRA) as a claim or defense to the application of many federal laws. The bill also includes houses of worship and religious school’s pre-K through college, daycare, shelters (including shelters for battered and sexually abused women), and more.

Religious and nonprofit schools that violate the bill could lose their tax-exempt status and schools could lose accreditation – which means they could not accept student loans and many graduates would not be able to be accepted into graduate schools. The expanse of the bill includes church and college overnight stays with youth and/or students, dorms, sports, bathrooms, locker rooms, and showers.

The Civil Rights Act of 1964 permits houses of worship to make employment decisions based on religion. This recognizes the essential right for houses of worship to employ those who align with their religious doctrine. The “Equality Act” would abolish this fundamental right. Churches, synagogues, and mosques could be forced to violate their sincerely held religious beliefs with respect to LGBTQ. The Senate version of the bill states that “Q” stands for “Queer.” This term can include the LGBTQ agenda but it also includes anything outside its realm – and it can include a long list of paraphilias, including “minor attracted individuals” (pedophilia).

This bill applies to “actual” or “perceived,” including a “perception of belief, even if inaccurate concerning” sex, sexual orientation, and gender identity. It also applies to “another person with whom the individual is associated or has been associated.” In other words, the expansiveness and vagueness of the bill’s reach includes actual status, perceived status, perception, and beliefs, even if the beliefs are inaccurate. It also applies if an individual alleges that an adverse action was taken because of the individual’s current or past associations – even if the individual does not otherwise come under the broad terms of LGBTQ.

RFRA is a federal law that protects religious freedom. Specifically, it “prohibits any agency, department, or official of the United States or any State (the government) from substantially burdening a person’s exercise of religion even if the burden results from a rule of general applicability, except that the government may burden a person’s exercise of religion only if it demonstrates that application of the burden to the person.” However, HR 5 clearly forbids raising RFRA as a claim or defense to the application to the “Equality Act” and many other federal laws that would be amended by this bill.

This “Equality Act” extends the federal protections to include sexual orientation, gender identity, and “pregnancy, childbirth, or a related medical condition” (abortion). HR 5 applies to employment, housing, rental, public accommodation and much more. The “Equality Act” massively expands the definition of public accommodations to include places or establishments that provide (1) exhibitions, recreation, exercise, amusement, public gatherings, or public displays; (2) goods, services, or programs; and (3) transportation services.” The word “establishment” is not limited to a “physical facility or place.” It includes virtually everything, including online provision of a good, service, or program.

HR 5 amends the Civil Rights Act of 1964 by striking the word “sex,” and inserting “sex, sexual orientation, gender identity” as protected classes throughout the federal code.  The language contained in this legislation will be used to force hospitals, healthcare providers, and pharmacists to provide abortion, abortion inducing drugs and devices, hormone-blockers, opposite hormone treatment from birth sex, and even surgeries. It will also require taxpayer funding of abortion.

The bill also bans counselors from providing and all age of clients from receiving any counsel to change or diminish unwanted same-sex attractions, behaviors, or gender confusion.

Liberty Counsel Founder and Chairman Mat Staver said, “The so-called ‘Equality Act’ is not at all about equality. If it was, the bill would not include houses of worship and eliminate religious freedom as a claim or defense. The bill is a massive expansion of the federal government into every corner of our lives. The reach of the bill combined with its vagueness and the repeal of the federal religious freedom law will result in a torrent of harassing and frivolous lawsuits. If this bill becomes law, the consequences are staggering.”

Shall a Christian judge?