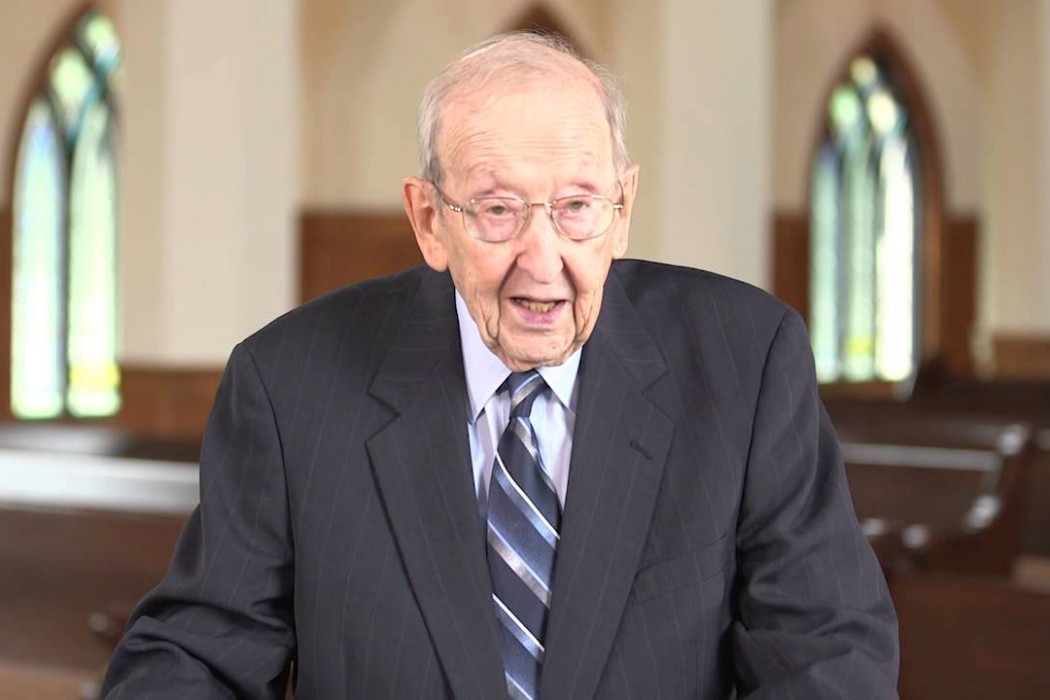 Introduction
1. The parameters of the paper
a. I am committed to the doctrine of the pre-millennial return of Christ.
b. By “return of Christ” I mean:
1) His visible body return
2) His return in glory
3) His return in the fulfillment of Zechariah 12:10 and Revelation 1:7 Every eye shall see him, even those who crucified him.
c. The scriptures uses two terms to describe his coming
1) Epiphaneia: His appearance to the eyes of all humanity
2) Parousia: the most frequently used term of the second coming. It is the arrival – the coming

2. I am affirming the message of the angels at the ascension of Christ. (Acts 1:11) “And while the disciples were looking steadfastly into heaven, as he went up, two men stood by the disciples and said to them, you men of Galilee why are you standing gazing into heaven this very same Jesus shall return in the same manner that you have seen him leave.” (Author’s paraphrase)

3. The ascension of Christ is the paradigm of his return
a. He ascended bodily
b. He ascended in his resurrection body
c. He ascends to heaven and the right hand of power and glory
d. The body of ascension is:
1. The resurrected body
2. The crucified body resurrected and glorified body. He returns in the same body.

These matters are not in dispute

4. The rapture is a sudden literal, physical catching away of all believers: that is, those who look for him.

I. The issues here is the relationship of the rapture and the great tribulation
A. That is a question raised primarily by Pre-millennialists. Post-millennialists. and A-millennialists generally do not treat the book of revelation with this degree of literalists.
B. So what do we mean by the word “Rapture?”
1. We have already noted that it is sudden as in “snatching away” or
“taking up”
2. In the words of Scripture in 1 Thessalonians 4: 16-17 comes to mind.
“For the Lord himself …
a) Shall come down from heaven. He will descend from his throne in glory.”
b) His descent will be announced with
– A loud command
– The voice of the archangel
– The trumpet call of God
c) He will by his appearance:
– Bring with him the dead in Christ. They will be raised from the dead by his coming.
– Catch up or (snatch away) those believers who are alive and remain
– The living saints will trade their mortality for immortality
– Their corruption for incorruption
– Their dying body for a body made alive by the Holy Spirit “A spiritual body”
d) So shall we be with the Lord forever
e) To them who are looking for him He will appear without sin unto salvation. (Hebrews 9:28)
f) This is what we mean by rapture
3. Rapture is the event in which
a. Christ will descend
b. The dead will rise
c. Those alive and remaining will be caught up
d. Believers will be changed into the perfect likeness of Christ, because they will see him as he is. (1 John 3: 1-3)

II. When will this occur in relation to the great tribulation?
A. This is not a concern for
1. Post- Millennarians
2. A- Millennarians
3. Those who treat the book of Revelation as though it is only a symbolic history of this world order and God’s judgment on it.
4. However it is of concern for me.
B. So what are our choices?
1. Pre-tribulation rapture
2. Mid- tribulation rapture (or some other point during the great tribulation)
3. Post- tribulation
C. The choice is determined by the distinction between the:
1. First resurrection: that is, the resurrection of the righteous, which is the first resurrection. (Revelation 20:4)
2. The resurrection of the rest of the dead: that is of the unbelievers. (Revelation 20:5)
3. Jesus used the term resurrection unto Life (John 5: 28-29) This is eternal Glory
4. In the same text he uses “resurrection unto damnation” This is eternal corruption and damnation.

III. The answer for me lies primarily in two passages of scripture Revelation 3:10 and Luke 21: 29-36
A. Revelation 3:10
1. The promises immediately addressed are to the church at Philadelphia (Revelation 3: 2-13)
2. This promise is broadened to include all believers because you have kept the word of my patience. (Revelation 3:10) It is a promise to all of the faithful.
3. The promise is specific to what believers are delivered from
a. It is the hour of the tribulation
b. That is about to come
c. On all those who dwell on the earth
d. It is followed by the words, “Behold I come quickly
(Tachu: quickly, without delay, soon, suddenly).
4. Note the following points in these text:
a. This text is specific in its description of the tribulation
1. This does not refer to the general trials that believers will all endure. “All those who live Godly in Christ Jesus will suffer persecution.” (2 Timothy 3:12)
“To know Christ in Glory requires that we know him in the fellowship of his sufferings.” (Philippians 3:10)
2. The Language of this text shows that the trial referred to is still future. It is a future that is tied to the things that John describes in the book of revelation. Believers are now in tribulation, but not the Tribulation that is about to come.
3. This Tribulation is imminent. There are no yet to be fulfilled events standing in the way of the Great Tribulation, except the catching away of the church.
Note: Beware of the countdown eschatology that is popular at this time.
Anecdote: I have in my desk a booklet entitled “88 reasons why Jesus will come back in 88.” This is a museum piece in my Library.
So our attitude is one of expectation not of the tribulation, but of the Parousia.
4. The tribulation is by divine appointment. It is bound to occur. God has made the decree and nothing can stop it.
5. This tribulation is intended for “Those who dwell on the earth.” These words always describe the unbelieving world. In the book of Revelation this clause never refers to the church.
6. The Great Tribulation is not for the refinement of the church. It is God’s certain judgment on this world order and nothing can stop it.
7. The promise of Christ to the church is “I will keep you out of the hour of the tribulation.” (Eis tes horas tou perasmou) “Out of” does not mean protection while you are in the tribulation.
B. Luke 21: 34-36
1. This is partially parallel with Jesus’ eschatalogical discourse in Matthew 24. It is Luke’s version of that discourse.
2. There are two parts to this discourse:
Luke 21: 3-24
Luke 21: 25-37
Luke 21: 3-24 describes the current turmoil in this world order and the oppression, which the world and satan impose on the church.
We have no reason to expect protection from this oppression

Note these events
a. Jerusalem will be destroyed (21:6) How many times have we seen this?
b. Many will come claiming to be “I AM” These imposters will claim to be Jehovah (verses 6-8).
c. Natural disasters will increase in number and intensity.
d. Persecution will increase in number and intensity.
e. Jerusalem will come under increased threat. (21:20)
3. Luke 21:22 changes tone: “Jerusalem will be trodden down of the Gentiles until the times of the Gentiles be fulfilled.”
4. These are the days of vengeance: that is, God’s Judgment on the earth and Jerusalem.
– On the earth because it is the sight of rebellion
– On Jerusalem because it gives itself to worldly power. (The power of the Anti Christ and its position in the world.)
5. This is parallel to Revelation 3:10 “The hour of the temptation that is about to come on the whole earth to try the ones that dwell on the earth.”
6. Jesus describes those things:
a. They are called the day of vengeance: The specific judgment of God.
b. This tribulation is world wide, not localized
c. It is aimed at the world not the church
d. Jerusalem will be trodden down by the Gentiles
e. There will be signs in the midst of the heavens and they will grow more and more in their intensity (21:25)
f. Men’s hearts will fail them for fear (Luke 21:26)
g. These things parallel the tribulations in the book of revelation.

7. Then comes the promise of Luke 21:27
“Then shall they see the Son of man while He is coming in power and great glory.” (Author’s paraphrase) Our personal redemption comes near or nigh and the kingdom of God is near in its fulfillment.
This is a quotation of Daniel 7:13 which is a prophecy of the end times.
“ I saw in the night visions, and behold one like the Son of man came with the clouds of heaven and came to the ancient of days and they brought him near before him and there was given to him dominion, glory and a kingdom that all people, nations, and languages shall see him. It will not pass way.
8. Jesus climaxes this discourse with an exhortation “While you are praying keep on watching in order that you may have the strength (KJV accounted worthy of) to escape all these things and to stand before the Son of man” (Authors paraphrase)

What are these things? They are the tribulation events that Jesus has just described

Conclusion: Is this escapism?
Yes with two provisions
1. You escape the earthly judgments
2. You escape in order that you may stand before the Son of man who is the Judge of all.
3. Does God provide the escape? Yes
4. We escape in order to stand face to face before the Son of man in his glory and kingdom.
5. This is the promise of Zephaniah 2:3 “Seek ye the Lord, all the meek of the earth which has wrought this judgment Seek righteousness; seek meekness, It may be that you shall be hidden in the day of the Lord’s anger.
Is this escapism? No it is God’s provision.
Is it escape? Yes
– Escape from judgment to receive glory
– Escape from hell and death to receive heaven and everlasting life
– I can live – live eternally – with that kind of escape.

Genesis 3:24, “So the Lord God drove out the man; and He placed cherubim at the east of the Garden of Eden, and a…