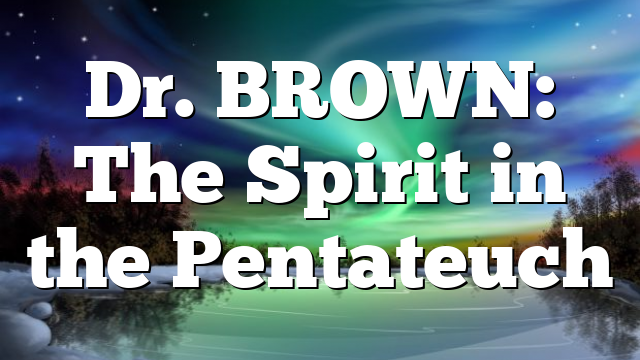 Starting in Gen 1:2, we read that in the beginning of God’s act of creation, when the earth was yet “formless and empty,” the rûaḥ ʾĕlōhîm was hovering over the face of the deep. Some Jewish traditions see a hidden reference here to the “spirit of the Messiah,”4 but that is an overtly homiletical (midrashic) interpretation. Instead, Jewish scholarship, along with some modern critical scholarship, primarily views God’s rûaḥ in Gen 1:2 as his wind (cf. NJPS, with “wind from God”; so also the NRSV; NJB has “a divine wind”). As Nahum Sarna notes, “Wind often functions as a divine agent in the Bible.”5 Later, he adds, it “reappears as the agent by means of which the water is separated—that is, blown back—as in Genesis 8:1 at the conclusion of the Flood and in Exodus 14:21 at the crossing of the Sea of Reeds.”6

Jack Levison rightly observes that, while “the border between wind, breath, and spirit is porous … the phrase rûaḥ ʾĕlōhîm (rûaḥ of God) cannot easily be construed as a wind from God in light of the many other occurrences of the phrase in the Jewish Scriptures that are not casual references to a wind from God. To take rûaḥ ʾĕlōhîm in Genesis 1:2 as a wind from God, then, is to deviate from the basic connotation of the phrase in every other occurrence in the Jewish Scriptures.”7 All the more does this hold true in one of the Bible’s most foundational theological and cosmological statements.

Still, he adds, “Yet Spirit may not be quite right either. In every other instance of the phrase rûaḥ ʾĕlōhîm, an individual is mentioned on whom or in whom the spirit exists. The context of Genesis, by contrast, is cosmic, with waters and presumably winds.” Thus, he concludes, “Another possibility, too, rears its head: rûaḥ as breath … So rûaḥ in Genesis 1:2 may reflect the impending reality of divine breath. Is rûaḥ wind? Spirit? Breath? Yes, and perhaps something more than each.”8

On balance, however, given the scope of OT usage, it seems best to concur with Myk Habets, who wrote, “What is clearly stated in Genesis is that God’s presence is active in the ruach and that the ruach ’elöhîm is superintending the work of creation and also, linked to verse 3, bringing creation about through the W/word. As Hildebrandt states, ‘The passage is emphasizing the actual, powerful presence of God, who brings the spoken word into reality by the Spirit.’ In this sense then the Spirit of God is not merely the ‘wind’ of God blowing across the cosmos, but rather the personal, creative, and very active presence of God awaiting the proper time to begin the creation process.”9 In short, the Spirit of God is “the Creator Spirit and the sustainer Spirit (cf., Gen. 1:2; 8:1; Ps. 104:29; Job. 33:4; etc.),”10 meaning that an important pneumatological statement is being made in this foundational passage of Scripture.

The next usage of rûaḥ, found in Gen 6:3, is also important theologically, but the precise meaning of the text is disputed, primarily due to the accompanying verb yādôn in the phrase lō’-yādôn rûḥî bā’ādām le‘ōlām, “my rûaḥ will not yādôn with [or, within] mankind forever.” This, the text states, is because the human race is merely flesh. The verb yādôn is normally rendered with either “strive, contend” (for example, KJV; NKJV; NASB; NIV) or with “abide, remain” (for example, RSV; NRSV; ESV; CSB; NET; NJPS; cf. LXX; Peshitta; Vulgate). If “strive, contend” is correct, then this would point to the personal aspects of God’s Spirit, in keeping with verses found elsewhere in the Bible, where it is the Spirit of God which is grieved or angered; see Ps 106:32–33; Isa 63:10; Mic 2:7; in the NT, see Eph 4:30.12 Here, the Spirit is striving with sinful human nature (as indicated by the context), characterized here as bāśār, flesh, which speaks of human weakness. There is a time limit to the Lord’s patience. He will contend with sinning humans for only so long before bringing severe judgment.

If “abide, remain” is correct (this is the majority view), it would speak only of God’s enlivening breath, which will not forever indwell human beings, given their fleshly limitations. As noted by Gordon Wenham, “it seems much more likely that [my spirit] denotes the life-giving power of God, on which every creature is entirely dependent for its life. It is called the ‘breath of life’ (2:7) or ‘the spirit of life’ (6:17; 7:15) and the phrase ‘my spirit’ is used again in Ezek 37:14.”13 See also Num 16:22, where the Lord is referred to as “the God of the rûḥôt [spirits] of all bāśār [flesh].”

The final pneumatological reference to rûaḥ in Genesis is found in 41:38, where Pharaoh, astounded by the revelatory wisdom given to the Hebrew prisoner Joseph and recognizing him as the perfect man to lead the nation through a difficult season, exclaims, “Can we find anyone like this man, one in whom is the spirit of God?” (NIV). While we can debate whether we should translate with “s/Spirit of God” or “spirit of the gods” or “divine spirit,” there is no question that Pharaoh recognized Joseph’s supernatural gifting. Surely this man is divinely empowered!

This would be in harmony with the usage of this term in Exod 31:3; 35:31. There, for the building of the tabernacle, God fills Bezalel “with the Spirit of God, with ability and intelligence, with knowledge and all craftsmanship, to devise artistic designs, to work in gold, silver, and bronze, in cutting stones for setting, and in carving wood, to work in every craft” (Exod 31:3–5, ESV). This is above and beyond the rûaḥ ḥokmâ in Exod 28:3, the spirit of wisdom or skill, which the Lord gave to others involved in this building process (cf. also below, to Deut 34:9). The gifting of Bezalel seemed to be on another plane, an even more supernatural plain. He could do what was humanly impossible, understanding just how to craft the specific items of the tabernacle that the Lord had revealed to Moses (cf. Exod 25:9, 40; Num 8:4).

Thus Joseph, endued with the Spirit of God, could interpret Pharaoh’s dreams and come up with a nation-saving food distribution plan, while Bezalel, endued with that same Spirit, could both conceive and construct the items of the tabernacle with divine precision and beauty. This would be in keeping with the Holy Spirit’s gifting and empowering in both the OT and NT. The divine wisdom and power are at work in and through human vessels.

Interestingly, as we continue to survey references to God’s Spirit in the Torah, the word rûaḥ does not occur a single time in Leviticus, not as wind or breath or s/Spirit. Accordingly, there are no references to the Holy Spirit in Leviticus. This, however, is more than compensated for in the book of Numbers, which features the single most important pneumatological passage in the Torah, found in Num 11. Also of note is Num 24:1–2, which states, “When Balaam saw that it pleased the LORD to bless Israel, he did not go, as at other times, to look for omens, but set his face toward the wilderness. And Balaam lifted up his eyes and saw Israel camping tribe by tribe. And the Spirit of God came upon him” (ESV; lit., “the Spirit of God was upon him”). And it was by this Spirit, the same Spirit that came upon the seventy elders in Num 11 (which means the same Spirit that was upon Moses) and the same Spirit that enabled Israel’s prophets to utter God’s word, that this hireling prophet now spoke.

The last three references to rûaḥ as “spirit” refer to Caleb and Joshua, beginning in Num 14:24, which states that Caleb, Joshua’s colleague in resisting the faithless report of the ten other spies, had a “different spirit” within him. While this could refer to the Holy Spirit, it more likely speaks of a different attitude or mindset. Otherwise, if Caleb had a “different spirit,” what “spirit” did the ten spies have? Phillip Budd also sees this as a reference to “a psychological use of ‮רוּחַ‬‎,” but, in my view, wrongly compares this to Num 11:17, which speaks of the Holy Spirit.15

In Num 27:18, Moses is instructed to set Joshua apart as the next leader of Israel because “rûaḥ is in him.” The Targum, once again, sees this as the “spirit of prophecy,” in contrast with the other ancient versions, which translate literally. But what, exactly, does it mean to have rûaḥ inside someone? The NJPS translates with “an inspired man,” while most modern Christian translations render more literally “a man in whom is the spirit” (or, “Spirit”), but even here, the definite article is added, while it is missing in the Hebrew text. The NIV renders with “in whom is the spirit of leadership,” but this is overly interpretive. Rather, as explained by C.F. Keil, rûaḥ here refers to “the higher power inspired by God into the soul, which quickens the moral and religious life, and determines its development; in this case, therefore, it was the spiritual endowment requisite for the office he was called to fill.”16 It would also appear that, by using rûaḥ without the article, emphasis is placed on the quality and nature of the enduement rather than simply stating that “the Spirit” was in him.

Joshua’s standing is further enhanced in Deut 34:9, which states that Joshua was “full of the spirit of wisdom” (rûaḥ ḥokmâ), just as certain Israelites were endued with this spirit according to Exod 28:3. In the case of Joshua, this enduement of the Spirit would enable him to lead Israel into the promised land; in the case of these Israelites, it was to enable them to construct the articles for the Tabernacle. In the future, this same “spirit of wisdom” will be active in the Messiah himself (Isa 11:3, where this is only one of six expressions of the Spirit of Yahweh that is upon him) as he leads the entire world into an era of peace and harmony. It is the divine Spirit which enables God’s servants to carry out the impossible tasks assigned to them.

“His lord said unto him, Well done, thou good and faithful servant: thou hast been faithful over a few things, I will make thee…