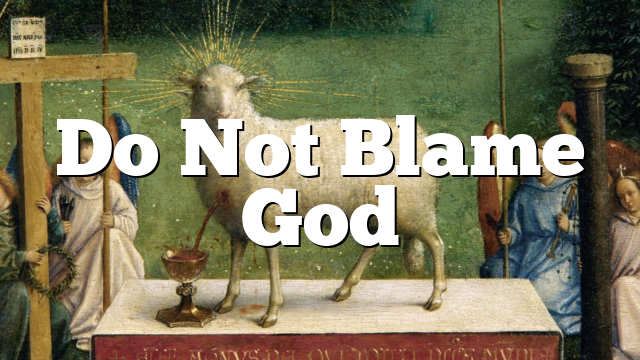 God isn’t about taking people. He is not the author of death but the author of life. He desires us to have a long life serving the Kingdom. But, while Jesus’ redemption transforms God’s people, we still live in a fallen world, and bad things come from the ways of the world, our flesh (often our own dumb decisions), and the lies of the devil.

While Jesus has given us the victory, we can allow the enemy’s work in our lives by believing his lies, which is why we are told to take our thoughts captive. “Casting down imaginations and every high thing that exalts itself against the knowledge of God, bringing every thought into captivity to the obedience of Christ” (2 Corinthians 10:5).

The way the enemy operates is through deception. He has no power to kill, steal or destroy in our lives anymore, unless he gets to us by deception.

Knowing God, with an intimate relationship with Jesus, and knowing the promises of His Word, we will not be deceived. Rather, with authority, like Jesus, we can resist the devil, saying, “It is written,” and the enemy will flee.

People blame the Lord for a lot of things that He had NOTHING to do with. For example, Rich Mullins, the famous singer of the song “Our God is an awesome God”, kept prophesying to himself that he would “die at a young age.” One day while riding in a jeep, he was thrown out and got killed in a wreck. Did God take him? No, the man did not wear a seat-belt. The person with him in the jeep, who wore a seat-belt, survived. And people say that the Lord took David Wilkerson, the famous prophet and pastor, who also died in a crash. Did God take him, too? No, he failed to wear a seat-belt. His wife, who DID wear a seat-belt, survived. And people say that the Lord took Keith Green in a plane crash. Is this true? No, Keith had hired a vastly under qualified pilot who lied about his ability to fly the plane. The plane was overloaded with people and crashed.

Are we starting to see a pattern here? The ENEMY is out there to kill, steal, and destroy. If the enemy DID not kill, Jesus would not have used the word kill in the description he gave him. And how does the enemy operate? Through deception. Here is one example of a deceptive thought from the enemy: “I don’t need to wear a seat-belt, God will protect me, and I’ll never be in a wreck…”

Many are angry with God

The Lord had NOTHING to do with a person’s untimely death, and we should not assume that He did

It is true, there are times God took people. This normally occurs when their job is done. Mullins in the above example was very young. Keith Green was 31 I believe, and it can be safely assumed that the Lord had more for them to do. We know He took Moses right before the children were to enter the Promised Land, for example but Moses had finished HIS part of the assignment, and it was time for Joshua to take over. So, in many cases, the Lord had NOTHING to do with a person’s untimely death, and we should not assume that He did.

There are many, many bitter people out there angry with God, and they have no real reason to be. When my fiancé died two years ago, four days before our marriage, the first thought to come to me was “God took her”, and I even had well-meaning Christians tell me “God knows what he’s doing”, as if they actually KNEW God’s heart on the matter. If I left things there, I too would have ended up angry with the Lord. But instead, I actually ASKED the Lord what happened, and He showed me that my fiancé was targeted by the enemy, so that, by taking her out of the picture, we would never go on the mission field, because the enemy hoped I would blame God and quit on God. But because the Lord has showed me how the enemy operates, I did not quit.

So, if you are on the sidelines angry with God because of some tragedy, perhaps you should consider asking the Lord to show you that particular situation through HIS eyes. You may be very surprised by what He reveals to you.

4 stages of a call

“Study to shew thyself approved unto God, a workman that needeth not to be ashamed, rightly dividing the word of truth.” – 2 Timothy…