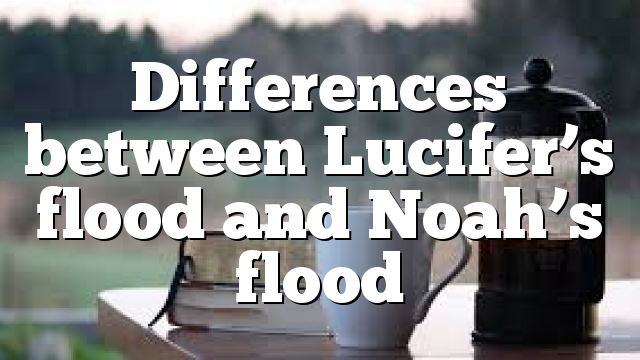 The two important things that we will learn from this chapter are that God will never destroy this earth by water ever again, and that we will always have our days and nights, and our seasons with us.
Genesis 8:1 “And God remembered Noah, and every living thing, and all the cattle that was with him in the ark: and God made a wind to pass over the earth, and the waters asswaged;”

The waters that covered the earth subsided gradually [asswaged]. God remembered Noah during that entire five month period, and all of his family and the living that were on the ark, they were all under God’s protection.

Genesis 8:2 “The fountains also of the deep and the windows of heaven were stopped, and the rain from heaven was restrained;”

Genesis 8:3 “And the waters returned from of the earth continually: and after the end of the hundred and fifty days the waters were abated.”

This is that five month period again, and at the end of the five months the flood waters started to go down, and the turbulence ended.

Remember in Revelation 12:16 it tells us that the earth will again open up and swallow Satan, the false-christ’s, flood of lies and deceit that came from him in these end times.

The flood spoken of in the end times is a spiritual flood of lies, and deceptions that will cover the entire earth.

That flood of the end times will also continue for a five month period, and this is recorded in Revelation 9:5; “And to them it was given that they should not kill them, but that they should be tormented five months: And their torment was as the torment of a scorpion, when he striketh a man.”

Genesis 8:3 separates the flood of Noah’s day from the flood that caused the end of the first earth age. For in Noah’s flood the waters declined gradually, and as we will see later, took a full year to totally resend.

In our study of Genesis chapter one, the flood that ended the first earth age, Lucifer’s Flood, went away instantly, at the word spoken by the Holy Spirit, the “ruach” in the Hebrew text.
Genesis 8:4 “And the ark rested in the seventh month, on the seventeenth day of the month, upon the mountains of Ararat.”

“Ararat” in the Hebrew tongue means “high ground”. The day that the ark came to rest on that high ground was five months after God sealed Noah and all the lives on board with him, in that ark. And then the “fountains of the great deep were broken up”, as recorded in Genesis 7:11. It is five months to the day later.

This now is three months after the ark came to rest on the “mountains of Ararat”. At this time the tops of other high mountains and high places could also be seen.

Genesis 8:6 “And it came to pass at the end of forty days, that Noah opened the window of the ark which he had made:”

“Forty” in biblical numerics is probation.

Genesis 8:7 “And he sent forth a raven, which went forth to and fro. until the waters were dried up from off the earth.”

The raven that Noah sent forth did not come back to the ark. In Leviticus 11:15 we are told that the raven is an unclean bird. This is an object less also of the unclean and godless of today. When they are sent out to do a mission, they do not give a care for others, or for God’s ways. They put themselves first, and care only for their own well being. This dirty bird, the raven probably found himself an old dead carcass rotting on the high ground, and stayed to fill himself. His own natural instincts set his priorities.

Genesis 8:8 “Also he sent forth a dove from him, to see if the waters were abated from off the face of the ground;”

The dove is an clean creature, and in symbolism represents the Holy Spirit of God.

The dove is unlike the raven, and refuses to touch her feet on the filth that covered the earth following the flood. She does not live of garbage and the dead. The dove came back home to the ark. She gave Noah the correct indication for the signs of the times; that the earth was not ready to accept the clean living of any kind.

The Holy Spirit is also in control and ready to give us the proper indications for the signs of our times. And at the end of the five month period of time which marks the end of our flesh age, He will give us all the necessary indications to know what we are to do. We can receive those instructions now, for God recorded them in His Scriptures, through the prophets, and we are to seal those instructions away in our minds. The dove cared for the living, and came back to the ark, and the Holy Spirit also cares for the living, spiritually.

Genesis 8:10 “And he stayed yet other seven days; and again he sent forth the dove out of the ark.”

All of these things that are happening are taking place on the Sabbath.

Genesis 8:11 “And the dove came in to him in the evening; and, lo in her mouth was an olive leaf plucked off: so Noah knew that the waters were abated from off the earth.”

Keep in mind that the “olive leaf” was “plucked off” a living tree, that was living to give Noah the sign that life and vegetation existed outside the ark. This is important. In the Hebrew text the wording for “olive leaf” reads; “newly sprouted olive leaf”. It was freshly grown.

We saw in Jeremiah 4:19 that in the total destruction that came upon the earth at the end of the first earth age was complete.

There were no man, nor birds, nor animals, nor vegetation [verse 27], and even the sun and heavenly planets were missing [verse 28].

So what is represented in this Olive leaf to show life? There had to be life in the vegetation, and a sun to germinate, and give new life to that seed of the olive tree that the leaf came from.

This also verifies that Noah’s flood was not the flood of Genesis 1:1-2, Jeremiah 4, or II Peter 3.

That flood , Lucifer’s flood, caused total void and destruction upon the whole earth.