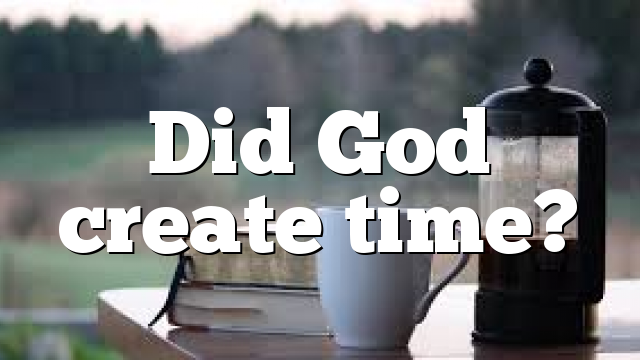 Did God create time? Is that idea consistent with the world view of Pentecostals?

Consider the world-view a Calvinist might have. Many Calvinists are determinists, thinking that God has already pre-determined everything. But Pentecostals tend to take more literally passages wehre God repented of what He had done. There are plenty of passages where God’s course of action seems to be done in reaction to choices people make, choices to disobey.

For example, God suggests to Moses that He will wipe out Israel and make of Moses a great nation. One might interpret this as God saying that for a purpose to get Moses to intercede, but would it have been deceptive for God to threaten that if it wasn’t a possiblity? We also read that certain Israelite sacrifices of their children had not entered into God’s mind. In Jeremiah 18, we read that if the LORD decrees that a nation or kingdom is to be torn down, uprooted, and destroyed and if that nation or kingdom repents of it’s evil, the Lord will relent of those plans for that city.

So is the future set in stone?

But God ‘creating time’ is a little bit different matter? The problem is if God exists outside of time, then does it make sense that some things He decrees would be conditional? Wouldn’t everything be determined?

I am not sure what goes on in the mind of a physicist. But I have difficulty believing that us time-bound beings can really conceptualize what it would mean to exist outside of time or even for there to be multiple dimensions. We might think of a few analogies. I am wary of apologetics that draws upon science or scientific speculation.

If God does exist outside time, that’s great. If not, that does not limit Him in any way. Paul in the Bible applies the quote to God, ‘In Him we live, and move, and have our being.’ If time were somehow an attribute of God Himself or a reflection somehow of one of His attributes as opposed to a creation, that would not diminish God in any way.

Is there anything in the Bible that teaches that God exists ‘outside time’ or that God created time? He gave us ways to mark days and nights and seasons, but that is different from God actually creating time.

The first time God speaks to man after creating him, He tells us to be fruitful and multiply, replenishing the earth, and to take…