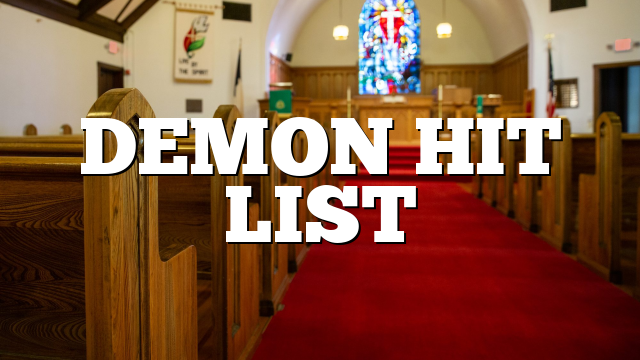 All Scripture quotations are taken from the King James Version (KJV) of the Holy Bible.

Introduction
ccording to Webster’s Dictionary, a thesaurus is a
dictionary of synonyms and antonyms; any
dictionary, encyclopedia, or other comprehensive reference book; a storehouse, repository, or treasury. The inspiration to write a deliverance thesaurus came partly from the use of Roget’s Thesaurus in deliverance. This is summed up best by Win Worley in his book, Demolishing the Hosts of Hell, on page 61:
Roget’s Thesaurus is a unique dictionary catalog of synonyms arranged in topical form. Because demons tend to “cluster” in family groupings, the thesaurus can be an amazingly helpful instrument to identify demons within a specific category. Commonly spirits in related “family” groups are under a ruler. In deliverance, the gift of discernment can zero in on a particular spirit. Often the Holy Spirit will give one the ruler’s name. When this spirit is forced to manifest himself his name, located in the thesaurus, becomes a tool to uncover his supportive network of demons. This will expedite deliverance and assure a clean sweep of that particular group.
For example, if a spirit of selfishness was discerned and forced to manifest itself, reference to the thesaurus reveals his cohorts: Calculation, Self-Centeredness, Egotism, Introversion, Narcissist, Stinginess and Pride.
7
Demon Hit List
To dig even deeper, each of these names can
also be looked up to secure a more complete
identification of various character deficiencies
and spiritual reinforcements that might be
present.
Since identifying and uncovering demons by name
is so important in deliverance, the idea to write a deliverance thesaurus is well overdue. Demons congregate in “groupings,” and knowing how they link up is invaluable to the deliverance worker. This thesaurus will help the worker to identify the names of different spirits, and also group spirits together that tend to “cluster” within people seeking deliverance. It will also be a handy reference book that the deliverance worker can refer to from time to time that will hopefully be a storehouse of information that will help destroy the works of the Devil.
The names listed will not only be synonyms of the most common spirits we deal with in deliverance, but also spirits that tend to group with them, and other information that will be helpful in setting a person free in a particular area. Names are important because they help us to identify the Enemy. Remember that Satan is a “ruler of darkness” (see Ephesians 6:12) and does not like to be exposed. He and his cohorts work best when they are able to operate in obscurity and darkness. When light and identification come (often through a name), their authority is broken and their work destroyed.
—JOHN ECKHARDT

Preface
What’s in a Name?
And he asked him, What is thy name? And he answered, saying,
My name is Legion: for we are many.
—Mark 5:9
ome argue that we don’t need to know the specific
names of demons. After all, what’s in a name? A name is a word or phrase that designates a person. Remember that when we are dealing with demons, we are dealing with personalities, not things. Names are what we use to identify persons. If someone shouts in a crowd, “Hey YOU! Come here!” you wouldn’t know which “you” the person was calling. But if someone shouts your name in a crowd, there would be an immediate response.
Therefore, names are used to identify. Each of us receives a name at birth that will identify us for the rest of our lives. You will answer to that name thousands of times throughout life.
On the other hand, to be nameless means to be obscure or undistinguished. It means to be anonymous —that is, not recognized. Demons don’t want you to recognize them. They want to be anonymous. Even though they have names, they would rather you not know it.
It is helpful sometimes to know the exact names of spirits you are dealing with, to destroy any excuse the demons have to stay. Sometimes demons try to use the excuse that their exact name was not called.
9
Demon Hit List
Mark 5:9 gives us a key revelation in dealing with
the Enemy. Jesus commanded the spirit to identify itself by name. Once the Enemy identified himself, Jesus cast him out. This is the power of identification. Identifying the Enemy is a key to casting him out. The more believers can identify the Enemy by name, the more successful they will be in driving the Enemy out.
The name of Jesus is the name given above every name (Philippians 2:9). His name, therefore, gives us authority over every demon name. The names found in this thesaurus are all subject to the name of Jesus. Again, the emphasis is name—the name of Jesus versus the name of demons. Thank God for the name of Jesus, the name above every name.

D
ABANDONMENT
ejection, forsaken, “grieved in spirit”
(Isaiah 54:6), deserted, cast away, cast
aside, neglect, orphan, hurt, deep hurt,
widow, orphan, unloved, outcast, unwanted,
loneliness, isolation. Operates in widows,
orphans, and adopted children, making them
feel abandoned by loved ones.
ABDOMEN
tomach, belly, gut. Serpentine spirits of
lust and scorpion spirits of fear can
lodge and operate in the stomach and lower
abdomen. We sometimes lay hands on the
stomach area and command them to
manifest themselves and come out.
ABNORMAL
izarre, deviant, strange, weird,
unnatural, uncommon, odd, unusual,
irregular. (When demons are in operation,
the result will be abnormalities; things that
cannot be explained naturally are often

abitual, constant, continual, deep-
rooted, deep-seated, lifelong, lingering,
persistent, stubborn. Chronic sicknesses and diseases, chronic financial problems, chronic marital problems, and so on. Problems and conditions that won’t respond to prayer, fasting, and the Word are chronic conditions that need to be dealt with in deliverance.

ncestral and generational, the result of
the sins of the fathers; curses of death
and destruction, sickness and infirmity, lust and perversion, incest, rape, mental illness, schizophrenia, poverty, witchcraft, idolatry, destruction of the family priesthood, Ahab and Jezebel, rejection.

A
DOCTRINAL
alse doctrines and teachings of all kinds;
doctrinal obsession, error, heresy,
doctrines of devils, various and strange
doctrines; all cults.

H
HINDRANCE (Blockage and Obstruction)
pirits that hinder, block, and obstruct: no
love, no help, no friends, no success, no
lodging, no pity, no understanding, no
wisdom, no relief (torment), no rest, no
solution, no power, no ability, no light
(darkness), no healing, no deliverance, no
happiness, no joy, no victory, no control, no
future (hopelessness), no liberty (control),
no discernment (blindness), no prosperity,
no breakthrough, no direction, no name, no
identity, no confidence, no peace.
No open doors (closed doors), no money (poverty), no job, no sense, no way, no value, no worth, no presence of God (Ichabod), no anointing, no blessings (curses), no communication, no growth, no order (confusion), no support, no morals, no

36
Thesaurus Listing
escape, no commitment, no faithfulness, no
self-control, no chance, no opportunity, no
family, no transportation, no mobility, no
break, no time, no room, no space, no health,
no strength, no home, no satisfaction, no
vision, no counsel. These spirits are also the
result of curses.
HINDUISM
alse religion, hopelessness (because of
caste system), idolatry, confusion,
reincarnation.

S
MOAB AND AMMON
ncest, perversion (sons of Lot and his
daughters through an incestuous union).
(See Genesis 19.)

abitation, dwelling, hiding place, den
of iniquity, breeding place. Command
demons that are hiding in people to come out of their nests.

D
OBSTRUCTION
bstacle, hindrance, blockage, barrier,
resistance, difficulty, block (many
spirits of blockage and obstruction including
choking, closed doors, cut off, cut off at the
source, gag, muzzle, shackle, bind, check,
halt, bring to a standstill, and so on).

dolatry, creatures of the night. (Ceramic
owls and frogs have been known to attract
demons into houses.)

Poperating in and controlling the spine.
56
Thesaurus Listing

ivination (Acts 16:16-18). A large
constrictor. (These spirits squeeze the
life out of relationships, churches, and so on.)

D
SCHIZOPHRENIA
ouble-mindedness, instability,
confusion (James 1:8), rooted in
rejection. The schizophrenic’s personality (the real personality) has never developed, due to demonic interference. The demonic personalities of Rejection (inward) and Rebellion (outward) have taken over, causing a split personality.

About the Author
ohn Eckhardt is called to impart and activate the
gifts of the Spirit in order to raise up strong
ministries in the body of Christ. A gifted man with a true apostolic and prophetic call on his life, his desire is to infiltrate the world with the Word of God. He is dedicated to perfecting the saints and training ministers to fulfill the call of God on their lives. Along with his apostolic and pastoral responsibilities, John Eckhardt produces a daily radio broadcast and “Perfecting the Saints,” a daily television program, and he ministers throughout the United States and overseas.
John Eckhardt resides in a suburb of Chicago with his lovely wife, Wanda, and their five children.
To order books and tapes by John Eckhardt,
please write or call:
Crusaders I.M.P.A.C.T.
P.O. Box 492
Matteson, IL 60422
(708) 922-0983

FacebookTwitterSubscribe
Subscribe to receive all news to your email or phone: [wysija_form id="1"]
demonhitlist

Perry Stone Ministries – PROPHETIC VISION THIS MORNING: “More Info on the VISION!” Something big is just around the corner and we need to…