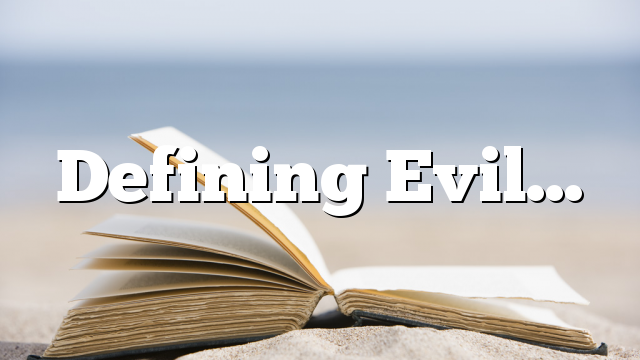 Evil is only sin if it misses the mark. Mankind has been given a mark to hit, a goal to achieve, a perfect standard. It is set forth in Scripture in general, and in the law in particular. The law is the expression of the moral and judicial side of God’s character. When men do evil to each other, it is a sin, because they fail to achieve the perfection of the glory of God. However, when God does evil, it is according to His perfect wisdom; it has purpose, and His arrow always hits the bull’s eye. Though we do not always understand what He is doing—because we do not see the end from the beginning—we ought to have faith that He is a good God who will work all things together for good (Rom. 8:28).

Job is set forth in Scripture as a primary example by which we may understand the concept of evil. First, we are told that “Satan” needed God’s permission to afflict Job with “evil.” See Job 1:12 and 2:6.

Why did God allow this? The book makes it clear that God had a higher purpose, not merely to test Job, but to bring Job to a greater level of understanding in the end. Job already knew more than the average Christian about the source of evil, for he said in 2:10, “Shall we indeed accept good from God and not accept adversity? In all this Job did not sin with his lips.”

The word translated “adversity” (NASB) is the Hebrew word ra’a, which means “evil” and is so translated in the KJV. It carries the idea of calamity and anything which men call “evil.”

Job’s friends tried to tell him that surely, he was harboring some secret sin in his life. This would explain why God was judging him (or allowing Satan to judge him). But in saying this, they sinned with their lips, and in the end, Job was required to pray for them (42:10).

At the end of the story (42:11, 12), Job’s family came and “comforted him for all the evil that the Lord had brought on him. . . . And the Lord blessed the latter days of Job more than his beginning.”
In other words, when the Lord does or allows evil to befall us, it is ultimately for the purpose of blessing us. This is the basis of Paul’s statement in Romans 8:28, “And we know that God causes all things to work together for good to those who love God, to those who are the called according to His purpose.”

There are many other Scriptures that have direct references to God doing “evil” without sinning. Amos 3:6 says, “If a calamity [ra-a] occurs in a city, has not the Lord done it?” God always takes credit for bringing judgment upon a city or a nation—including Israel—in order that they might know the Source and purpose of their judgment, which they call “evil.”

Divine judgment is never coincidental, as historians may think. While God uses “natural causes,” He always stands behind history as the First Cause of all things. This is the story presented in Scripture, whether God was hardening Pharaoh’s heart (Ex. 10:1) or putting a hook in his jaw (Ez. 29:4) to ensure that they would do His bidding.

We are called to get to know the God of the Bible, so that we begin to comprehend Him and the way He thinks by the mind of the Spirit. This is often difficult, especially the more evil we see, and the more that bad things happen to us personally. Our perspective is simply too limited, too personal, too myopic, and so it is fortunate that we ourselves are not God.

We must ultimately come to the same conclusion as Joseph did, after being sold as a slave by his own brothers, and after being imprisoned for years through false accusation. In Gen. 50:19, 20 he said, “Fear not; for am I in the place of God? But as for you [brothers], you thought evil against me; but God meant it for good, to bring to pass, as it is this day, to save many people alive.”

This attitude is the primary mark of spiritual maturity in Scripture. All the bitterness and anger of his youth had melted away, once he saw the greater purpose of God in all the “evil” done to him. He had ceased to think of good and evil dualistically. He now saw both good and evil with a singular mind as proceeding from God and having an ultimate good purpose.

Watch full episodes here: https://jimbakkershow.com/vod/ You can also watch all past and present Jim Bakker Shows on The PTL Network using your Roku, Apple…