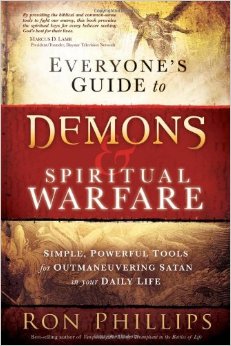 How God anointed Jesus of Nazareth with the Holy Ghost and with power: who went about doing good, and healing all that were oppressed of the Devil; for God was with Him. (Acts 10:38)

INTRODUCTION For too long the work of demons has been dismissed by many as a curious practice in heathen cultures. It has not been considered as a problem which invades lives, homes, churches, and nations. As you previously learned, demons are an organized force of powers against which believers wrestle (Ephesians 6:12). Demons are the agents through which Satan works to accomplish his purposes in the world. The following chart summarizes what you have learned about demons and their realms of operation:

If you are to wage effective warfare, you must learn how to deal with demonic powers that obsess, oppress, or possess the body, soul, and spirit. There are people all about you who are tormented, troubled, and even possessed by the powers of darkness known as demons. This chapter presents guidelines for ministering to those affected by demonic powers.

JESUS AND DEMONS The teaching and ministry of Jesus demonstrated that demonic spirits are a real force of evil. What Jesus taught about demons and how He dealt with them yields valuable information about the strategies of Satan. Jesus accepted the fact that Satan is the ruler of a host of demons. He taught of the reality and power of demons. He said that the casting out of demonic powers was one of the signs that the Kingdom of God had come. Read Matthew 12:22-30, Mark 3:22-27, and Luke 11:14-23 for a summary of what Jesus taught concerning demons. A large portion of the ministry of Jesus involved dealing with demons. It is the example of Jesus and the authority of His name that provides the Scriptural basis for dealing with demonic powers. Jesus ministered to “all” who came with demonic problems. Peter said of Jesus:

… God anointed Jesus of Nazareth with the Holy Ghost and with power: who went about doing good, and healing all that were oppressed of the devil. (Acts 10:38)

In the “Tactical Maneuvers” section of this lesson you can study further on specific cases recorded in the Bible where Jesus dealt with demonic powers.

HOW DEMONS OPERATE As you have learned, demons are used by Satan to oppose God, His plan and purposes, and His people. They also war against unbelievers to keep them from the truth of the Gospel. Demons control specific territories (principalities) such as the prince of Persia mentioned in Daniel 10:12-13. Demons also work through personalities, through men and women, to accomplish Satanic objectives in the world.

As you learned, demons have different natures. Remember that one demon identified himself in I Kings 22:23 as a “lying spirit.” A “deaf and dumb” spirit is identified in Mark 9:25. Demons of various natures operate as spirits of infirmity, seducing spirits, and unclean spirits. Satan uses them to war against man in body, soul, and spirit:

What is your view on the end times?