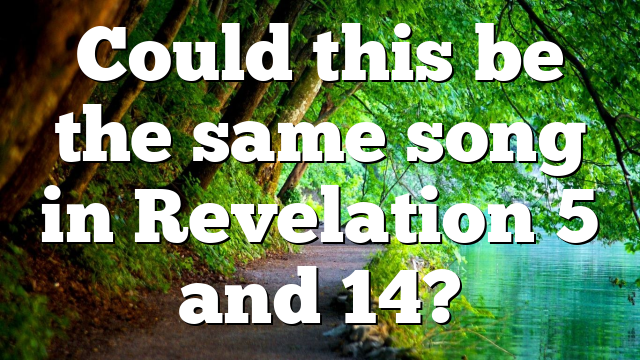 8 And when he had taken it, the four living creatures and the twenty-four elders fell down before the Lamb. Each one had a harp and they were holding golden bowls full of incense, which are the prayers of God’s people. 9 And they sang a new song, saying:

14 Then I looked, and there before me was the Lamb, standing on Mount Zion, and with him 144,000 who had his name and his Father’s name written on their foreheads. 2 And I heard a sound from heaven like the roar of rushing waters and like a loud peal of thunder. The sound I heard was like that of harpists playing their harps. 3 And they sang a new song before the throne and before the four living creatures and the elders. No one could learn the song except the 144,000 who had been redeemed from the earth.

It is said no one could learn this song except the 144 000 who were redeemed from the earth. It's not clear whether this song was the same as the one sang by the four living creatures and twenty-four elders

Could this be the same song?

Why am I NOT a Calvinist? REASON #5 People backslide

Why am I NOT a Calvinist? REASON #5 People backslide by their own choices and free will. It’s not God’s fault! Jon Sellers John…