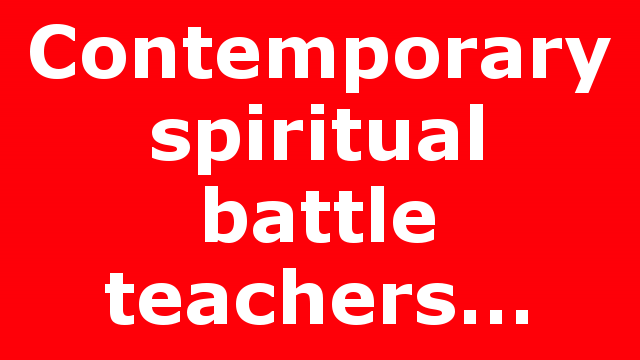 Chapter 11 reveals that the contemporary, popular spiritual battle teachers are sending us in the wrong direction. We are battling on the wrong front and for the wrong reasons.

SATAN’S CHARACTER REVEALS HIS STRATEGY
How is the Battle Going to Unfold?
God’s restoration plan, according to the Biblical story, is to first create a new man, no longer under Satan’s rule and reign, “This means that anyone who belongs to Christ has become a new person. The old life is gone; a new life has begun!” (2Co 5:17 NLT) Then God equips the new man so that he is fit to stand and resist the power of the enemy until he is fully mature “…and to put on the new self, created to be like God in true righteousness and holiness.” (Eph 4:24 NIV) God finally completes the new man’s restoration by removing sin from man’s presence forever. The Believer is restored to the “image of God” he was in the beginning.
We know that Satan is defeated and was judged at the coming of Jesus; and, as I wrote earlier, he is furious toward those Christians who have rebelled against his illegitimate kingdom. From within the framework of God’s story we know that Satan is not interested in restoring his kingdom, he has already lost that authority. Instead, he is focused on stopping the restoration of God’s crowning creation, mankind. By staying within that same framework we can find clues that will reveal what the battle is focused on. Knowing his strategy and gathering other factors within that same framework will help us to discover the Christian’s roll in the spiritual battle.
For example: In God’s story we learn that Satan was created full of wisdom to rule over all the angels in heaven. But from his name the “Serpent” we learn that he has misused that wisdom to become a very crafty and deceiving being. Knowing this should help us to realize that, with thousands of years of practice, his best weapon against Christians would be to deceive them. He is not going to be up front with Believers about what he is doing. He is going to be sneaking in like a con-man, true to his nature (crafty, shrewd) and lie, lie, lie!
Now the serpent was more crafty than any of the wild animals the LORD God had made. He said to the woman, “Did God really say, ‘You must not eat from any tree in the garden’?” (Gen 3:1 NIV)
“So that huge dragon– the ancient serpent, the one called the devil and Satan, who deceives the whole world…”(Rev 12:9 NET)
His other name the “Devil” tells us that he is also very good at “pointing the finger.” He is going to try to divide and conquer through “slander” and “accusations” against God, His Word and the people of God. His weapons for this would be selfishness, lust, self-centeredness etc. His goal would be to stop Christians by separating them from God and each other by getting them to “point the finger” (like in the garden); “divide and conquer.”
Then I heard a loud voice in heaven say: “Now have come the salvation and the power and the kingdom of our God, and the authority of his Messiah. For the accuser of our brothers and sisters, who accuses them before our God day and night, has been hurled down (Rev 12:10 NIV)
Finally, the name Satan tells us that he is the Christian’s adversary or opponent who will be accusing them before God all the time. But Christians also have an adversary who works on their behalf, always interceding for them, Jesus Christ.
“…But if anybody does sin, we have an advocate with the Father– Jesus Christ, the Righteous One.”(1Joh 1:1 NIV)
Then he showed me Joshua the high priest standing before the angel of the LORD, and Satan standing at his right side to accuse him. (Zec 3:1 NIV)
Who will bring any charge against those whom God has chosen? It is God who justifies. (Rom 8:33 NIV)