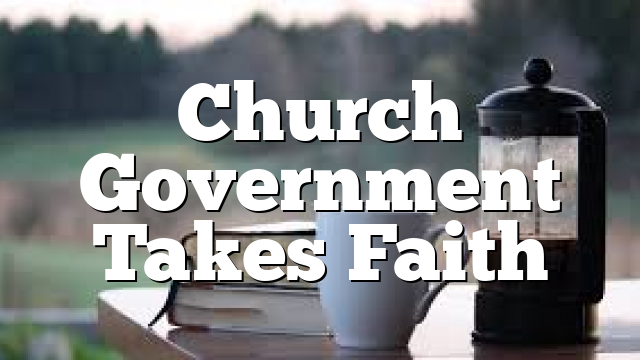 A VISION FOR FAITH IN CHURCH GOVERNMENT – Ray E Horton

“For unto us a Child is born, unto us a Son is given; and the government will be upon His shoulder…”(Isaiah 9:6).

The Government: on Whose Shoulders?

The government is on whose shoulder? The head of the church, Jesus! We must be mindful of this when we discuss the practical aspects of church government.

A friend wrote about the need for five-fold ministry being in their proper roles, and the need for rank to achieve order.  Someone responded: “five-fold, blah, blah, blah,” clearly having been turned off by abuses.

The five-fold is clearly Biblical, but is the idea of rank and hierarchy?

The five-fold is clearly Biblical. Where I disagree is the idea of rank and hierarchy.

Rank means a degree of control for supposed “order.” But God is not a God of control and it is something we need to avoid as well. That is where the discipleship movement of the ’70s went wrong. Control brings a natural consequence of lording it over one another.

Many in modern day apostolic, prophetic, and related movements simple replace pastor with apostle or prophet. Rather, the Biblical Ecclesia is team ministry, with co-equal elders overseeing the church, with the elders having various mixes of five-fold ministry.

How do you have order without rank. By choosing spiritually mature people who can pray together and come to the consensus on God’s mind, each able to see beyond their own five-fold emphasis to respect the others. That takes faith, trusting the Holy Spirit can work in others.

Let me re-emphasize: When I speak of elders, I am not thinking of a board that you see in some denominational churches, selected because they are older, or even more years since being Born Again. I have known many believers who have not grown spiritually. Nor a group selected primarily because of natural talents, like successful businesspersons.

Rather, I am talking about believers of good character, meeting Biblical qualifications, mature in the sense that they have grown to understand who they are in Christ and to be able to recognize, trust in, and obey the Holy Spirit’s leading, in His power. Such would be humble and teachable, able to appreciate and work with the giftings in others.

It Takes Faith and Prayer

It is only because of the fear of having unspiritual or immature people in church government roles that this model is neglected. That is why the early church prayed and fasted in order to together hear the Holy Spirit before setting people apart for various roles, e.g. Paul and Barnabas being sent forth. They took it very seriously. I don’t recommend we use this method but look how the first Apostles sought God’s mind in choosing Mathias to fill the place that Judas abandoned. They drew lots. I am sure they didn’t think they were choosing by chance, but that Holy Spirit was choosing.

In other words, it is God’s church, with Christ as the head. We do not need a so-called “vicar” to stand in His place (as the Roman Catholics believe). He has not left us but is with us by the Holy Spirit. Trouble is that people in leadership have not been trusting the Holy Spirit in others.

Genesis 3:24, “So the Lord God drove out the man; and He placed cherubim at the east of the Garden of Eden, and a…