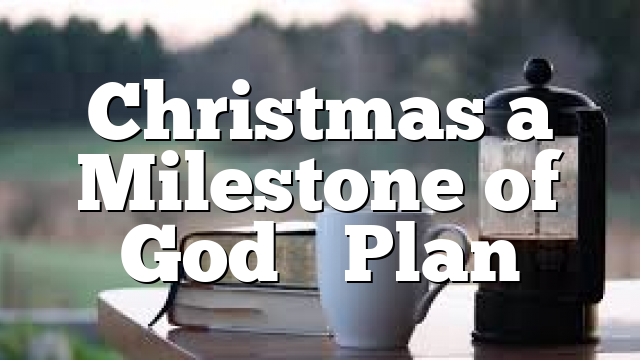 At Christmas time, we celebrate a milestone in God’s eternal plan. With unfathomable love, He had created us like Himself, in His own image, with free will, full knowing that we would abuse that freedom and cut ourselves off because of pride and self-will. But He had a plan, the one and only way we could be redeemed, our sins remitted, and have those free wills perfected.

A Mystery – His Incarnation in Us

The Old Testament prophets foretold His coming, as Peter preached: “To Him all the prophets witness that, through His name, whoever believes in Him will receive remission of sins” (Acts 10:43).

And yet the fullness of the plan was a mystery even to them – unknown until the great revelation came to Paul of our oneness with Christ, which Jesus hinted at in John 15:5: “I am the vine, you are the branches. He who abides in Me, and I in him, bears much fruit; for without Me you can do nothing.” Paul described this mystery as our very hope of glory, revealing “the mystery which has been hidden from ages and from generations, but now has been revealed to His saints [us, His people]. To them God willed to make known what are the riches of the glory of THIS MYSTERY among the Gentiles: which is CHRIST IN YOU, the hope of glory” (Col. 1:26-27).

What awesome grace we have received, initiated in the amazing incarnation of God in human form

What awesome grace we have received, initiated in the amazing incarnation of God in human form, coming into the world as we do, living the perfect, sinless life, culminating with the fulfilling of the eternal plan, made before time, with Jesus taking our death and humiliation with His great sacrifice on the cross, and His rising to give eternal life to all who will receive.

We don’t merit His favor and wondrous salvation on our own. But He loved us before we ever knew Him, and that love continues eternally. Because of Jesus, God treats us like Jesus, with undeserved honor, because He has purified our spirits, restoring our very nature. And, He has given us the Holy Spirit, the Spirit of Truth, by which He reminds us of who we are in Him and makes the renewal of our minds possible for the overcoming of the flesh. He, giving us healing and gifts and power, is the down payment on our full restoration, even fully renewed minds and glorified bodies someday.

And He offers us ongoing forgiveness by His one finished work on the cross, needed as we grow in Christlikeness by yielding our self-will to Christ within, so that He can manifest increasingly through us.

Grace, and Christmas, are about all these things. It’s about His incarnation in our lives when we were Born Again, His victory in us, and the victory He has given to us, all received by choosing to step out in the faith that He has supplied. “As His divine power has given to us all things that pertain to life and godliness, through the knowledge of Him who called us by glory and virtue” (2 Peter 1:3).

All things are ours, as undeserved gift. Now let us lead yielded lives and rise up in His power, drawing on those heavenly resources that are ours, and be His instruments to change the world, allowing His love and light to shine through us to accelerate the advance of the Kingdom now, and bring in the harvest, building His glorious church in preparation for His return.

May you have a joyous Christmas as you meditate on the truths of God’s eternal plan, celebrating Jesus incarnated, and His three-part coming, who came as one of us to bring us redemption and restoration to who we were made to be, coming to live in us, vessels, temples of the Holy Spirit, and coming again soon in glory to eliminate the evil and injustice and restore all things.

4 Weapons Often Ignored That Can Help You Win Spiritual Battles