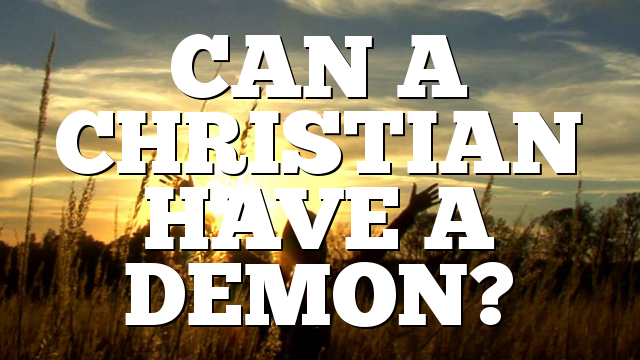 Someone asked if I believed a Christian can have a demon. I thought my response might be helpful to others as well. I wrote:

I cut my spiritual teeth on deliverance ministry, soon after I was spirit-filled in 1973. I don’t disagree that “that demons can afflict real born-again believers,” but over the years I have come to understand the important spirit-soul distinction. The demonic can’t touch the perfected born again human spirit which has been sealed by the Holy Spirit.

However, the soul (mind, will, emotions) remains vulnerable, and mental strongholds definitely can be influenced by demonic oppression. Possession in a believer, no, since that would be taking over the essence of who the believer is in Christ in the human spirit. So, I have come to realize that deliverance for Christians is at the level of the mind, and we then need to teach them to take their thoughts captive.

Your example of Christian’s addicted to pornography is a good example of mental strongholds, where giving in to it invites demons and makes the habit more difficult to break without deliverance. Their spirit is still pure, sealed by the Holy Spirit, which is why the Christian will hate the sin that they are addicted to.

These type strongholds are often carried over from their BC days, and while the renewal of the mind to who they are in Christ is the ultimate long-term solution, sometimes deliverance is needed to break the cycle. This is true of alcohol and most addictions, even things that are often not recognized as addictions, such has selfishness, covetousness, anger, and chronic anxiety and depression.

So, can a Christian have a demon? Well, yes and no. Not in their human spirit, which is united with the Holy Spirit, but yes at the soulish level. This is my current take of the subject, which has evolved over the years with more study and revelation from the Word and some experience working with people with these issues.

How to Break Generational Curses