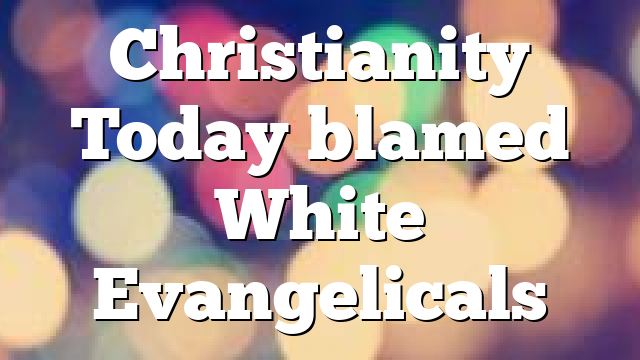 Under the creative article title, “We Worship With Magi Not MAGA,” Christianity Today wrote, “The atrocity was in large part brought to us by the white evangelical church in America.”

The season of Epiphany—also called Theophany in the East—focuses on Jesus’ revelation of his true identity to all the world. In the West, it centers on the stories of the Magi (who represent the nations or the Gentiles) finding Jesus through their mysterious stargazing. In the weeks ahead, the Epiphany season recalls the baptism of Christ and the wedding at Cana, Jesus’ first miracle.

But what a strange Epiphany we had in the United States. Instead of Magi worshiping a newborn king, MAGA hats descended on our nation’s capital. Instead of the baptism of Christ announcing his true identity, men and women held signs proclaiming “JESUS SAVES” as they demanded to overturn an election. Instead of a miraculous display of love at a wedding feast, we saw a display of political violence.

Epiphany calls us to light and truth. It reminds us that the promise of Isaiah is fulfilled in Christ: “Nations will come to your light, and kings to the brightness of your dawn” (60:3). Light is beautiful, and it is also revelatory. The word epiphany comes from the word reveal and gestures toward a realization of the truth. To have an epiphany is to grasp reality, to receive insight. In these gospel stories, followers of Jesus begin to slowly understand who he is. They glimpse the truth: The light of the world has come to all people and all ethnic groups.

FacebookTwitterSubscribe
Subscribe to receive all news to your email or phone: [wysija_form id="1"]
blamedchristianityevangelicalstheologytodaywhite

MASADA http://andnowyouknowmore.blogspot.com Excavations at Masada provide us with a précis as it were, of the history of Roman Palestine from the Maccabees in the…