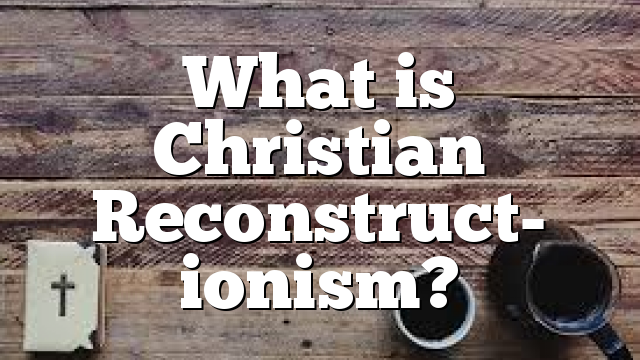 You may not be familiar with the terminology, but you know the ideas.

Christian Reconstructionism is a powerful mix of religious and political ideas gaining enormous strength in the American church and society. Ideas like:

As a pastor in a local congregation I began to notice the growing buzz surrounding these ideas, along with serious confusion about what it all means. As a theologian, I began to consider the possibility that the time had come for serious theological testing of these main ideas.

I was still thinking about the possibility when Governor Rick Perry of Texas launched his candidacy for the presidency of the United States with a prayer rally in Houston, Texas, in August 2011. It was called “The Response.” It was designed as a Christians-only effort to call on divine support for the candidacy, and to “claim” the United States for Christianity. What is not so well known is that it was organized by a group associated with Christian Reconstructionism: The New Apostolic Reformation.

So, here are some—brief—responses to the above ideas (for a more in-depth theological critique, see my new book No! A Theological Response to Christian Reconstructionism).

Do Christians really have a “worldview” that includes everything? The friends of Job certainly thought so. According to their “worldview,” if Job suffered, it must be because he did something wrong. Why else would God punish him? But when God comes onto the scene at the end of the book, he doesn’t merely correct their false worldview, he condemns the very notion that faithful people have a worldview to begin with. God exclaims: Why, they can’t even explain the exotic grandeur of a hippopotamus (Job 40: 15 ff.); how are they going to claim to know every fact in the universe? The fact is, according to the Bible, faithful people don’t know everything.

Is Christianity American, and America Christian? I am not convinced. First of all, the early puritans did not leave a secular country to found a Christian nation; they left aChristian nation to found a free nation. And what about the miraculous growth of global Christianity, perhaps the miracle of our time? Christianity is not American; it is Ghanaian, Nigerian, Chinese, South Korean, Chilean, Mexican, Polish, etc. It is all of these, and none of these; because it is centered in the risen Christ alone, not in anygeographical center. Try telling a faithful servant of the risen Christ in Botswana that Christianity belongs to America!

Are we as Christians really here to dominate?  This one was the easiest question to answer of all, because the entire earthly life of Christ cries out differently. We are here to serve, only to serve, until we have nothing left.

Paul McGlasson is the author of No! A Theological Response to Christian Reconstructionism(https://wipfandstock.com/store/No_A_Theological_Response_to_Christian_Reconstructionism) and pastor of First Presbyterian Church in Sullivan, Indiana. He received his MDiv from Yale Divinity School, and his PhD from Yale University in Systematic Theology. Before entering the parish ministry, McGlasson taught theology for several years in college and seminary.

Can the AMERICAN CHURCH survive the Tribulation?

RT @Ron Culbreth After doing my devotion today, as is my custom to do each year on this day I read the Declaration of…