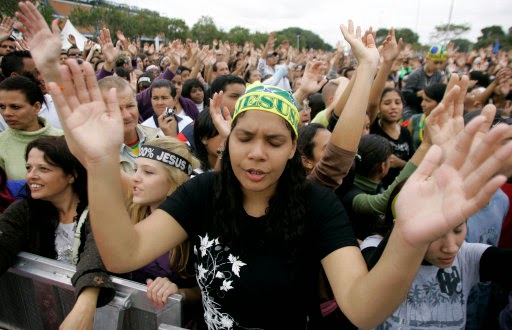 These terms describe the impact of Pentecostalism in the mainline churches such as the Episcopal Church. Pentecostalism refers to churches and movements that claim to re-experience the spiritual gifts associated with the outpouring of the Holy Spirit at Pentecost in Acts, especially the gift of tongues. The experience is usually referred to as “Baptism in the Holy Spirit.” In 1953 Agnes Sanford was one of the first in the Episcopal Church to have such a Pentecostal experience. She was a noted healer and activist in the Order of Saint Luke. Richard Winkler, rector of Trinity Episcopal Church, Wheaton, Illinois, also had such an experience at about this time. He began holding meetings in his home and later in the parish. Winkler was also a member of the Order of Saint Luke. In 1959 several California parishes witnessed Pentecostal experiences, including St. Luke’s, Monrovia, St. Mark’s, Van Nuys, and Holy Spirit, Monterey Park. Dennis Bennet was at this time rector of St. Mark’s, Van Nuys, and Frank Maguire was vicar of Holy Spirit, Monterey Park. Dennis Bennet and his wife Rita quickly emerged as leaders of the new movement, along with Jean Stone Willans of St. Mark’s. Willans founded the Blessed Trinity Society in 1961 and its Logos magazine to promote charismatic renewal in mainline denominations. Also during this period the Cathedral of St. Paul in Detroit became involved in the charismatic movement under the leadership of Dean John Weaver. Episcopalians involved in the charismatic movement have often not shared the more fundamentalistic theology of those involved in classical Pentecostalism. By the 1990s, the charismatic movement in the Episcopal Church was largely organized through Episcopal Renewal Ministries.

America in Danger: Part I Conspiracy theories and the demonic in history

“This is from Rev. Dearteaga’s forthcoming book, America in Danger” Then the chapter title. Part I Conspiracy theories and the demonic in history Conspiracy…