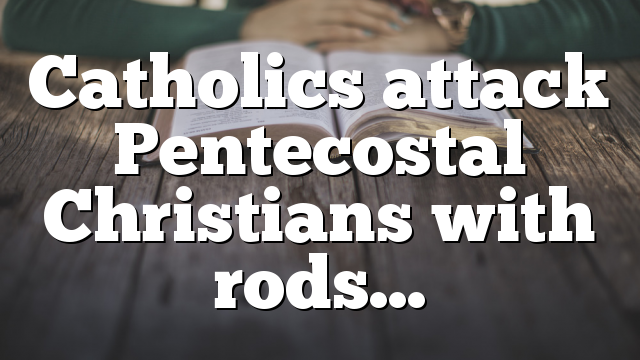 A gang of Catholics reportedly attacked Pentecostal Christians with rods and stones in Oaxaca, Mexico at the beginning of November.

The NCHR reported in a statement that the attacks were instigated by San Juan Ozolotepec President, Pedro Cruz Gonzalez, who “ordered the demolishing of their temple, the lynching, incarceration and torture of the followers of the religious congregation.”

Alfredo Alonso, whose family has been victimized for years under Cruz Gonzalez, said that in 2011, the leader had tried to shut down the construction of a Pentecostal church building. Gonzales had also threatened to expel other Christians from the city, and had blocked them from accessing government food aid programs.

In May, Cruz Gonzalez threatened to “burn [Christians] and throw their bodies into a canyon if they did not renounce their faith.” After Christians spoke up and called for state intervention, Cruz Gonzalez jailed a church member for speaking out.

“By the work of God we are still alive, because they beat us with all fury, even using iron rods and stones, and they threatened to burn us just for wanting to help our family members, who are victims of abuse of authority by the intolerant municipal president,” Alonso told Agencia JM.

A gang of Catholics reportedly attacked Pentecostal Christians with rods and stones in Oaxaca, Mexico at the beginning of November.

Free eBook – Kay Arthur’s – Philippians – How to Have Joy

Free eBook –  Kay Arthur’s – Philippians – How to Have Joy Precept Ministries International How do I live the Christian life joyfully regardless of people or circumstances? What is the purpose of suffering and the Christian perspective on death? … Continue reading →