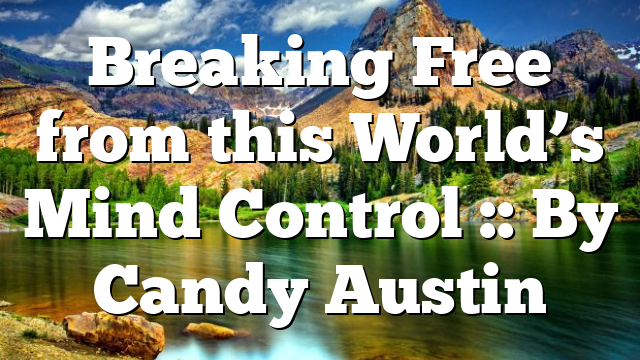 Have you ever heard an authority figure tell a young person, “So, if all your friends jumped off a cliff, would you do it too?” How about, “If everyone decided to jump in front of an oncoming train or a Mack truck, does that mean that you would need to do that too?” Nothing is more disheartening for a Christian parent than to see their child follow after their ungodly peers or to dive headfirst into lock-step union with the wicked ways of the world.

The problem seems to be that young people, especially nowadays, don’t really seem to know how to think objectively for themselves anymore. In case one has been on autopilot or is asleep, we have all been brainwashed! Basically, mind-controlled literally nonstop by the ‘god of this world’ from the time we are born to the time we die! See, if Satan can gain control of our thoughts, then he can garner control of our hearts, minds, attitudes, and actions.

Just like in the Garden at the very beginning when that Old Serpent told Eve, “Ye shall not surely die: For God doth know that in the day ye eat thereof, then your eyes shall be opened, and ye shall be as gods, knowing good and evil” (Genesis 3:4-5). Once Eve believed that, she made the decision to go against what God had originally told her and ‘did her own will.’ Not surprisingly, hence is the Law of Satanism, which is to ‘Do as Thou Wilt’… basically to do whatever you want, do it your own way, do whatever is ‘your truth’…. Essentially it is to be ‘your own god.’ Doesn’t all of this sound so familiar in this modern-day culture?

Proverbs 14:12 “There is a way which seemeth right unto a man, but the end thereof are the ways of death.”

Let’s dive into not being able to think clearly for oneself, shall we, and take the celebration of certain holidays. For example, during one of my Assignments working in a classroom one Fall, I remember observing kids staring at a whiteboard on the wall in a ‘trance-like fashion,’ watching a video animation with caricature ghouls, ghosts, and goblins dancing all around to some eerily spooky Halloween music (repetitive ooo, eee, ooo, ooo, eee, ooo) while waiting in line to show their papers to their teacher. It was sad for me to see such brainwashing in action. Some were even staring at the scene on the wall as if they wouldn’t be able to break their gaze and finally look away!

From the time I can remember, and throughout my lifetime career in and around the Educational System, it has become evident that this Establishment is in the business of grooming us (like herding cattle on through, if you will) to acquiesce, accept, and embrace all of the manmade traditions, thoughts, and behaviors of this world. Isn’t that just like Satan to get the whole world to participate in one big mass ritual all on the same day or around the same timeframe? If one really dives in and does the research, one will find that most, if not all, such celebratory traditions are utterly Pagan in origin. Yes, as Christians, we have ‘Freedom in Christ’ to participate or to not participate, and we should all be ‘fully convinced in our own minds’ on whether we will or not.

As for me now, every day is alike; every day is church, not just one day a week. Every day is special, and every day is to be lived for the Lord. Why should I buy into all of the commercialism and ‘go broke’ several months out of the year just to ‘keep up with the Joneses’ when I know that we buy things, treat ourselves, and get gifts all year long? For me, it does not make sense to observe one day over another just because we’ve been taught, groomed, or brainwashed to do so. The things I buy for my house are things we can have out all year long, so there is no need for seasonal storage, and there is less mess and less clutter. What a concept to actually get to ‘discern for oneself,’ and who knew it could be so freeing too!

Romans 14:5 “One man esteemeth one day above another: another esteemeth every day alike. Let every man be fully persuaded in his own mind.”

Another thing included in mind-controlled brainwashing is in the use of Signs and Symbols. The YouTube Channel, ‘A Call for an Uprising,’ and now, ‘A Time for Judgment’ (since his channels keep getting banned) have been instrumental over the years in opening the eyes of countless people in seeing how these Signs and Symbols have been used. Unfortunately, most of us are on autopilot and aren’t really aware of how much these Signs and Symbols are ‘hidden in plain sight,’ if you will.

Think about the 5-pointed Star (literally the Pentagram) and how it is on so many Towns’ Water Towers, State/Country Flags all around the World, on Banks, even Sports Teams, on thousands of Business Logos, Restaurant Chains, Clothes, Toys, Books, Magazines, Video Games… basically on just about everything, if we would just open our eyes! Try and break out of the ‘Matrix’ even if just for a few minutes. Isn’t it odd that this same 5-pointed Star Pentagram symbol is representative of nearly just about everything? It is as if these organizations are in ‘lock-step unison’ and can’t seem to break out of the mold of this World’s System. Remember, Satan is the ‘god of this world,’ and as Christians, we know that the whole world lieth in the power of the wicked one, so it should come as no surprise if one is truly awake (2 Corinthians 4:4).

Romans 12:2 “And be not conformed to this world: but be ye transformed by the renewing of your mind, that ye may prove what is that good, and acceptable, and perfect, will of God.”

As a Sign Language Interpreter for most of my life, I didn’t think much about certain hand signs and went on in my 30s to get an ‘I love you’ hand sign tattooed on my ankle. Years later, when I started to wake up, I found out that Helen Keller, who apparently was an Occultist, was the one who came up with this hand sign. After more extensive research, I became mortified that I ever got that nefarious sign/symbol ignorantly tattooed on me! Horrified even more still that I ever got anything inked on my temple, for that matter!

See, when we’re ‘on autopilot’ and not really thinking for ourselves, we tend to ‘go along with the crowd’ and do things that we normally wouldn’t do if we were really in our right frame of mind. Same goes for the 2-fingered, V-shaped ‘Peace hand sign,’ which also, upon research, is anti-Christian in nature. This symbol is an inverted broken cross meant to mock our Savior and Christianity in general. Yet, how many people, or Christians, for that matter, will we see use that hand sign ‘to look cool’ just because (ahem… monkey see, monkey do) everyone else seems to use it too? See how thinking and discerning for oneself is a new concept and how important it is for us to do so?

Proverbs 4:23 “Keep thy heart with all diligence; for out of it are the issues of life.”

Let us think about the ‘Cross symbol’ for a moment; yes, it has become representative of Christianity, but isn’t it odd that Satanists and Occultists will also wear this symbol around their necks? For a blatant example, just look at the various godless Musicians and high-ranking Witch Celebrities who all tend to use this very same symbol in their concerts, as their jewelry, and on their ‘demonically inspired’ clothing. Isn’t that really telling and oh so nefariously odd?

For example, I know a person who has Crosses of all shapes and sizes from floor to ceiling on a wall in their house, yet they are the most coldhearted and unkind person one will ever meet. Seeing how rudely they have treated wait staff at restaurants in the past conveys a lot. Number one: being a mean person is definitely not a Fruit of the Spirit. And number two: having that symbol all over a wall in their house obviously did not change them or bring them closer to the Lord in any real way.

Let us truly think for ourselves for a moment; why do we revere a ‘symbol’ (some scholars say our Lord died on a stake/pole) on which our Lord died when the one thing we should look to on our walls is His Words? For Jesus Himself said, “Heaven and Earth will pass away, but My Words will never pass away” (Matthew 24:35). Aren’t His Words more important than the instrument that was used on which He died? What if our Lord died on a guillotine, in an electric chair, or even by a machete/butcher knife? Would we have a wall in our house from floor to ceiling with machetes, butcher knives, or even electric chairs all over it? Forgive me if this ruffles any feathers or steps on any toes, but thinking outside of this World’s conditioning and mind-controlled box is what I am aiming for.

Hebrews 4:12 “For the word of God is quick, and powerful, and sharper than any twoedged sword, piercing even to the dividing asunder of soul and spirit, and of the joints and marrow, and is a discerner of the thoughts and intents of the heart.”

It has been several long years since the ‘Old Pied Piper’ (the devil himself) has lured our children away, enticing them with his music and the ways of this world. And we know that there are no guarantees that repentance will be found for them. Truth be told, I have been at war with myself for allowing all of the above-mentioned topics into our lives in the past, at war with Witchcraft itself (for Rebellion is as the Sin of Witchcraft), and at war with the Principalities, Powers, Rulers of Darkness, and Spiritual Wickedness in High Places which inevitably robs from us all.

Those who know this type of pain, affliction, and angst will understand what I am talking about. There’s an anonymous quote to the authoritative question at the beginning of this article which says, “If all my friends were to jump off a bridge, I wouldn’t jump with them. I’d be at the bottom to catch them.” This piece is my way of not jumping off the bridge; instead, it is of me being at the bottom in hopes of catching someone. Hopefully, one of the ones I may catch will be the very lost loved ones that I have written about.

Until next time… Maranatha!

Sincerely and In Christ,