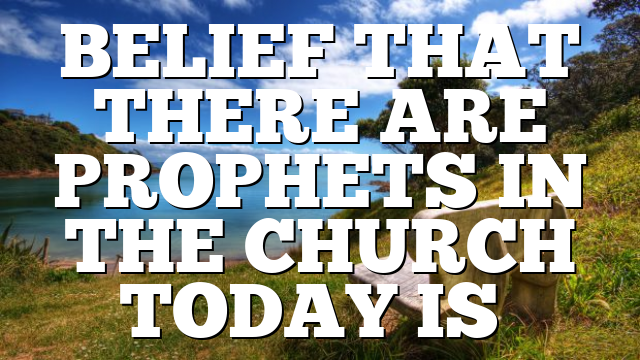 BELIEF THAT THERE ARE PROPHETS IN THE CHURCH TODAY IS SUPERFLUOUS.

There are very many sincere Christian folks who believe that they are prophets or have prophets in the church. I would humbly submit that this belief has no basis when sound hermeneutics is applied in reading the 3 portions of scripture from the Bible. Sadly, and more so sadly, many are lost because they follow these so-called prophets and end up being frustrated and some even turn back or relapse.

If you have some time, please read and lets us engage and question all I write below. First, let it be known that there are no prophets in the present-day church because the church does not need them. Apart from the fact that the 3 sign Gifts: Tongues, Prophecy and Knowledge ceased as shown in 1Corinthians 13: 8-13 , the Bible addresses this issue in three other places:

Jesus was about to leave the earth by the way of the Cross and He prepared His disciples for the Holy Spirit who was to come and be with the disciples, to strengthen them and also to guide them through the next phase of their ministry and life. He did not talk about prophets and He did not train any Prophet whatsoever, He trained fishers of men. These 12 He sent them to preach to the Lost sheep of Israel. If prophets were important, Jesus would surely have told His disciples. In John 16:5

These things I did not say to you at the beginning, because I was with you. “But now I am going to Him who sent Me; and none of you asks Me, ‘Where are You going?’ 6 But because I have said these things to you, sorrow has filled your heart. 7 But I tell you the truth, it is to your advantage that I go away; for if I do not go away, the [c]Helper will not come to you; but if I go, I will send Him to you. 8 And He, when He comes, will convict the world concerning sin and righteousness and judgment; 9 concerning sin, because they do not believe in Me; 10 and concerning righteousness, because I go to the Father and you no longer see Me; 11 and concerning judgment, because the ruler of this world has been judged.

God does not leave His people in confusion. He sent the Holy Spirit and God the Holy Spirit speaks and guides every Christian who He indwells. There are no Christians who have more of the Holy Spirit than the others, as those who believe in prophets seem to suggest, each of us on equal standards can approach God in confidence because He is our Father. I see a spirit of patronizing and colonizing others here when common Christians start claiming that God called them to be Prophets. Some go as far as using the name prophet as a title: Prophet Owuor, Prophet Bushiri, Prophet Odongo, Prophet Wepukhulu Prophet William Marion Branham, Prophet Ellen G. White etc….. The OT prophets like Jeremiah were just known by their names and their work was to speak for and of God to the People. Even Kings could not approach God, they had to seek the prophets’ indulgence before making decisions like going to war , In 2 Chronicles 18 King Ahab wanted to go to war but King Josiah advised him in these words:

“But first we should ask if this is the Lord’s will.” 5 So King Ahab called four hundred prophets together and asked them, “Should we go to war against Ramoth in Gilead or not?” They answered, “Go, because God will hand them over to you.” 6 But Jehoshaphat asked, “Isn’t there a prophet of the Lord here? Let’s ask him what we should do.” 7 Then King Ahab said to Jehoshaphat, “There is one other prophet. We could ask the Lord through him, but I hate him. He never prophesies anything good about me, but always something bad. He is Micaiah son of Imlah.” Jehoshaphat said, “King Ahab, you shouldn’t say that!” 8 So Ahab king of Israel told one of his officers to bring Micaiah to him at once. (2 Chronicles 18; 2 Chronicles 19; 2 Chronicles 20;).

The scenario above shows the role and function of prophets among the Israelites and these functions were exclusively for PROPHETS. As it can also be seen during the days of King Saul, he could not hear anything from God because the only way through which God communicated to the people was through the Prophets as recorded in **1 Samuel 28:**5,6; “When Saul saw the Philistine army, he was afraid and trembled violently. 6He inquired of the LORD, but the LORD did not answer him by dreams or Urim or prophets.** **During those days, prophets had a role and a function but now we have the Living risen Christ who indwells us. The only conclusion we can make here is that there are no Prophets today because we have the Holy Spirit who enables and gives us the Right to approach God. We no longer have Mt Sinai where they will ascend to go and meet God on our behalf.

In the Coming of Jesus Christ, we see the nation of Israel having been anticipating the Messiah who would baptize people and they knew the Messiah would be a prophet and that is why they questioned John the Baptist in these words: .

24 Now they had been sent from the Pharisees. 25 They asked him, and said to him, “Why then are you baptizing, if you are not the [r]Christ, nor Elijah, nor the Prophet?” 26 John answered them saying, “I baptize [s]in water, but among you stands One whom you do not know. 27 It is He who comes after me, the thong of whose sandal I am not worthy to untie.” 28 These things took place in Bethany beyond the Jordan, where John was baptizing. John 1: 24-28

Since Jesus was greater than the last Prophet, and John described Him as the True Light that enlightens EVERY MAN not just a few individuals calling themselves prophets. The last prophet in the order of the Old Testament Prophets was John the Baptist who had the following to say of Christ in John 1: 6

and just before He was crucified, He told His disciples that He would send another counselor who would be with and in the disciples throughout. This scenario does not envisage any form people called prophets since the Holy Spirit would indwell all Christians. Jesus said to His disciples in John 16:

12 “I have many more things to say to you, but you cannot bear them now. 13 But when He, the Spirit of truth, comes, He will guide you into all the truth; for He will not speak on His own initiative, but whatever He hears, He will speak; and He will disclose to you what is to come. 14 He will glorify Me, for He will take of Mine and will disclose it to you. 15 All things that the Father has are Mine; therefore, I said that He takes of Mine and will disclose it to you.

The Holy Spirit takes the center stage and all of us have the same footing before the Lord. We need no intermediaries. In Christ we all can talk to God. The bible teaches that the reason Jesus Christ came was to do away with intermediaries between God and Man. If you believe in this statement, you cannot believe that there are prophets of any kind now in the Church because we do not need them. Jesus is sufficient.

Why should we have human beings who claim to have a higher standing before the Lord when the Bible teaches otherwise? In Philippians 2: 6 we read that

Jesus, who although He existed in the form of God, did not regard equality with God a thing to be [f]grasped, 7 but [g]emptied Himself, taking the form of a bond-servant, and being made in the likeness of men. 8 Being found in appearance as a man, He humbled Himself by becoming obedient to the point of death, even death [h]on a cross. 9 For this reason also, God highly exalted Him, and bestowed on Him the name which is above every name, 10 so that at the name of Jesus every knee will bow, of those who are in heaven and on earth and under the earth, 11 and that every tongue will confess that Jesus Christ is Lord, to the glory of God the Father.

Nobody is special, nobody is to be revered. There is no Prophet between us God. There are no prophets in the present Church because we have Jesus Christ through whom we can approach the throne of God in confidence because of the finished work of Jesus on the Cross. The role Jesus plays in lives now is described vividly in Hebrews 1:1-4,

“God, after He spoke long ago to the fathers in the prophets in many portions and in many ways, 2 [a]in these last days has spoken to us [b]in His Son, whom He appointed heir of all things, through whom also He made the [c]world. 3 [d]And He is the radiance of His glory and the exact representation of His nature, and [e]upholds all things by the word of His power. When He had made purification of sins, He sat down at the right hand of the Majesty on high, 4 having become as much better than the angels, as He has inherited a more excellent name than they”.

God made it possible for those of us who were once alienated from Him to come to Him and talk to me without intermediaries. No Pastor, no Priest, no Bishop, No Human being is special before God now. I say here with the Hymn Writer

My faith has found a resting place,
Not in device nor creed;
I trust the Ever-living One,
His wounds for me shall plead. I need no other argument,
I need no other plea;
It is enough that Jesus died,
And that He died for me.

2 Enough for me that Jesus saves,
This ends my fear and doubt;
A sinful soul I come to Him,
He’ll never cast me out.

3 My heart is leaning on the Word,
The written Word of God,
Salvation by my Savior’s name,
Salvation through His blood.

4 My great Physician heals the sick,
The lost He came to save;
For me His precious blood He shed,
For me His life He gave.as being God

FacebookTwitterSubscribe
Subscribe to receive all news to your email or phone: [wysija_form id="1"]
AREbeliefchurchis…prophetsthattheTHEREtoday

Do you guys have any recommendations on scholarly books which address Pentecostal homiletics?