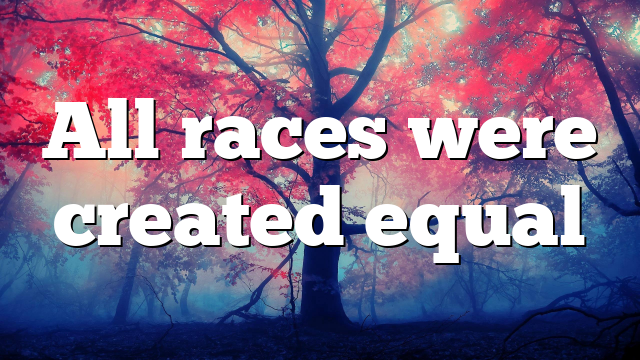 Where did these people come from that would kill Cain?Gen. 4:15 And the LORD said unto him, Therefore whosoever slayeth Cain, vengeance shall be taken on him sevenfold. And the LORD set a mark upon Cain, lest any finding him should kill him.

Where did Cain get a wife and the people to start building a city?Gen.4:17 And Cain knew his wife; and she conceived, and bare Enoch: and he builded a city, and called the name of the city, after the name of his son, Enoch.

Adam and Eve didn’t have more children until after Cain knew his wife and built a city.Genesis 4:25 And Adam knew his wife again; and she bare a son, and called his name Seth: For God, said she, hath appointed me another seed instead of Abel, whom Cain slew

2:7-25 God formed Adam(formed means to take something already created and form it. This is why it says he formed Adam, it don’t say he created him. So It is very clear this is two different events.)

We find here ,the creation of man could eat everything but forming Adam could not.So again we find this is two different events)

1:29 And God said, Behold, I have given you every herb bearing seed, which is upon the face of all the earth, and every tree, in the which is the fruit of a tree yielding seed; to you it shall be for meat.

2:16-17 And the LORD God commanded the man, saying, Of every tree of the garden thou mayest freely eat: 2:17 But of the tree of the knowledge of good and evil, thou shalt not eat of it

1:24-25.God created the beasts before the man and in 2;19 he formed the beasts after he formed Adam.(So here again we find these are two different events)

6:2 The sons of God saw the daughters of men that they were fair; and they took them wives of all which they chose.(So here we see two different groups of people,the sons of man and the Sons of God.This is where Cain got his wife from ,the sons of man.)

On Noah’s Ark there were living of ALL flesh and that includes all races of people.6:18 But with thee will I establish my covenant; and thou shalt come into the ark, thou, and thy sons, and thy wife, and thy sons’ wives with thee.

6:19 And of every living thing of all flesh, two of every sort shalt thou bring into the ark, to keep them alive with thee;they shall be male and female.

1Peter003:020 Which sometime were disobedient, when once the longsuffering of God waited in the days of Noah, while the ark was a preparing, wherein few, that is, eight souls(Sons of God) were saved by water.

Gen.2:7 And the LORD God formed man (Adam ,A Son of God)of the dust of the ground, and breathed into his nostrils the breath of life; and man became a living soul.(This is talking about the sons of God or soul.)

The Bible is quite clear about there being many people on the earth at the time of the story of Adam and Eve. The Bible does not support the idea that Adam and Eve gave birth to all the different races on the earth,

but rather implies that Adam and Eve were a separate (Formed) in the midst of other people who existed prior to them. Since these “other” people existed before Adam, they are called “pre-Adamic.

Adam was a special (Formed) who was called for God’s own purpose. The Bible, and Genesis specifically, is not a comprehensive account on all of God’s creation .

What is covered is just the history God felt relevant to include. The Bible simply does not detail the creation and origin of any other people besides the Adamic family, though we read about these other people later in the Bible.

I shall be a FUGITIVE and a vagabond in the earth: it shall come to pass, that EVERY ONE that findeth me shall slay me.”If only Adam and Eve existed, then who was Cain afraid of that would kill him? Who was it that he would be a fugitive from?

It is quite clear that the “every one” which Cain was referring to could not be Adam and Eve. Who was Cain referring to? Cain was well aware that many people existed in the lands around them.

031:007Thus was he fair in his greatness, in the length of his branches: for his root was by great waters.

These were not natural trees.Natural trees can’t envie 031:009I have made him fair by the multitude of his branches: so that all the trees of Eden, that were in the garden of God, envied him.

Trees don’t have hearts.031:010Therefore thus saith the Lord GOD; Because thou hast lifted up thyself in height, and he hath shot up his top among the thick boughs, and his heart is lifted up in his height;

The bottom line is, who is this cedar tree that Pharaoh is like? 031:002Son of man, speak unto Pharaoh king of Egypt, and to his multitude; Whom art thou like in thy greatness? 031:003Behold, the Assyrian was a cedar in Lebanon with fair branches,

Who is all the nations that shook at his fall? 031:016I made the nations to shake at the sound of his fall, when I cast him down to hell with them that descend into the pit: and all the trees of Eden, the choice and best of Lebanon, all that drink water, shall be comforted in the nether parts of the earth.

Dan Duncan [07/19/2015 7:55 AM]
Your theology, while well intended, is in error. Gen 3:20 clearly states that Eve was the ” mother of ALL living ” (emphasis mine). Therefore, there was only one man and one woman in the beginning. Gen 5:4 merely gives an account of the generations after Seth was born. Obviously, there were others before Seth. The Bible does not exclude the possibility of other children prior to Seth’s birth, it only mentions that Adam had more children after Seth. Adam lived for 130 years prior to the birth of Seth so it is possible that pre-diluvian world, Eve was probably equipped by God to bear many children.

Have you read the book? Here’s a great concise review of its main points