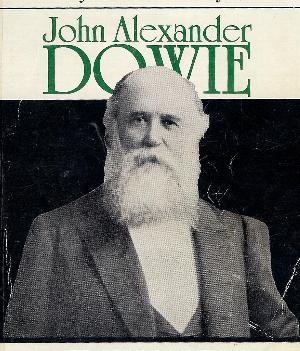 Question about Alexander Dowie. After Dowie established Zion, Charles Parham went to study the city structure so he can apply it to his ministry. The Topeka healing school was a direct result of this study. So was Parham’s courses in Texas where Seymour studied. Seymour then applied the same civil principles during the Azusa Street revival in LA. A Messiah complex or a true architect of America’s early Pentecostalism. What do you think?

John Kissinger [04/16/2015 6:12 PM]
In Zion City, Ill., a little girl of about six years came to her mother and said she was going to get saved. She went upstairs and commenced to pray, and the Lord heard her. She called down to her mother “Mamma, if something in me says I am sanctified, is that Jesus speaking?” Her mother said, “Yes.” Then she said “Mamma, I am sanctified.” She got down and prayed again and was baptized with the Holy Ghost, and the Lord had had her preaching, and gave her a message to one of Dowie’s elders that had fought this work. So God spoke through this little child unable to read. He could preach through the ass of Balaam and He can take a little child and preach through it.

Anthony Leftwich [04/16/2015 6:22 PM]
In the latter days of his ministry, Dowie crossed the line from charismatic leader to egomaniac, signing his documents as the “Last Apostle”.He most definitely was a seed planter of what we now call the Pentecostal/Charismatic movement.

John Kissinger [04/16/2015 6:30 PM]
Apostolic Faith: In Minneapolis the Dowieites are closing up their missions and coming with us. We have a large hall, and it was filled all day yesterday. Hallelujah. http://cupandcross.com/the-apostolic-faith-may-1907/

Christopher Alam [04/16/2015 8:26 PM]
Dowie started well but his ego ultimately destroyed him. A sad ending to a great man of God. I believe Parham only followed his ways to a certain point. Seymour learned from Parhams ministry to a certain point but was never really like him. The difference Dowie and Seymour is vast. Dowie for one was an egomaniac but Seymour was a very humble and self-effacing man.

John Kissinger [04/16/2015 8:30 PM]
article posted above by Charles Page points out another movement leader, A.J. Tomlinson who would have been kept current of the ministries of John Alexander Dowie and B.H. Irwin. Not coincidental that in 1906 Tomlinson described his role at the first Church of God general assembly as “ruling Elder” – term used previously by both Dowie and Irwin http://www.pctii.org/cyberj/cyberj1/hunter.html

Jeffrey D. Madison [04/16/2015 10:12 PM]
That’s a good question Asen. I would not say that Seymour had a messiah complex. However, from what I have read Parham and Dowie got caught up in that type of thinking. From The International Dictionary of Pentecostal and Charismatic Movements, 2003: Concerning Parham and Seymour. At some point in 1906 Parham went to Zion to help re-establish it as the Pentecostal capitol. Before Dowie died He went insane, as a result he caused the community to separate theologically. Parham tried to capitalize on this by trying to take control of the city (he failed). Seymour left Parham’s school well before that. The major consensus for Seymour’s departure was due to the fact that Parham was overbearing and controlling. This was seen when Parham tried to take over the Azusa mission in Oct. of 1906 (again he failed, lol). Frankly, I would down play any serious correlation between Seymour and Parham. First, they had completely separate doctrines of Spirit baptism. Second, Parham’s doctrines eventually led him to exclusionism. Where Seymour’s doctrines understood the universality the gospel. For example, Seymour viewed salvation as being obtained by faith in Christ. For Parham, salvation morphed into a concept that was only for those who were Spirit baptized with the evidence of tongues. Besides for confirming that the gift of tongues was for today, Parham had little influence on Seymour. The strife that Seymour experienced had little to do with his personality, and everything to do with race. From all accounts he was a humble man who loved God and people.

Celebrity chef, television host, and best-selling author shares her latest book, “Tasting Grace: Discovering the Power of Good to Connect Us to God, One…