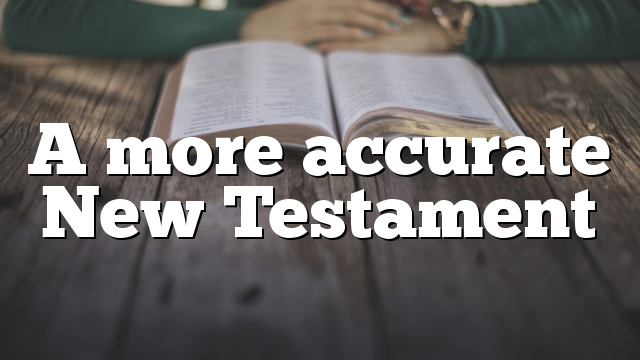 Two tasks now need to be done if the next generation is to have a better, that is, a more accurate, New Testament. First, much of the evidence which has come to light in the last eighty years must be collected and published in a usable form. Second, on the basis of this evidence a new edition of the text of the Greek New Testament must be prepared. If the first is done, the second will be done. If the second is done, new translations, or English versions of the New Testament, will be made.

But more manuscripts were discovered after 1869, and, of the earlier ones, Tischendorf knew some of his manuscripts only in part.

What is the Best New Testament by ERNEST CADMAN COLWELL

THE University of Virginia in ***1947*** invited me to deliver a series of lectures on the manuscript sources of the New Testament. These lectures were given as the James W. Richard Lectures in Christian Religion in the autumn of that year. The present volume is a rewriting and enlargement of the Richard Lectures.

I wish to take this opportunity to thank President Colgate Darden of the University of Virginia and Professor S. V. McCasland for the many courtesies shown me in Charlottes­ville.

I must acknowledge also my indebtedness to scholars from many countries whose labors have supplied the material which is here presented. My association with these scholars in the study of New Testament manuscripts has been an exceedingly pleasant one; and I hope that they will tolerate this effort to make scholarly lore intelligible to the layman.

1   [Archaic] a) a teaching or being taught; instruction b) something taught

2   knowledge or learning; specif., all the knowledge of a particular group or

having to do with a particular subject, esp. that of a traditional nature

Why Hearing is the Last Thing