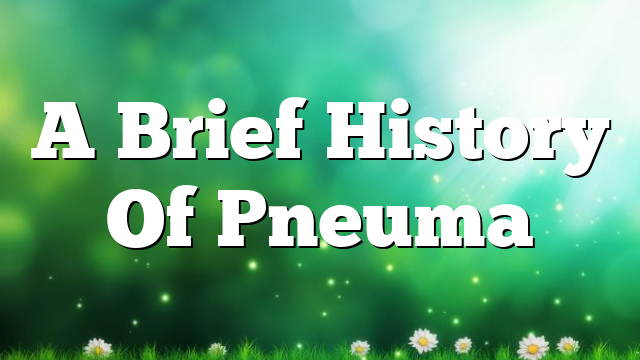 A Brief History of Pneuma The First Forty Years

In 1970, the Society for Pentecostal Theology first convened as an international organization of scholars focused on the study of pentecostal and charismatic Christianity. Nine years later, the society published its first volume of Pneuma, a peer-reviewed journal that publishes articles on a wide array of topics in the scholarly disciplines of history, theology, biblical studies, philosophy, missions, ethics, praxis, ecumenism, and religion and culture. Pneuma has become an international platform for a multidisciplinary and global academic discussion on pentecostal and charismatic Christianity. The publication of this volume represents the fortieth anniversary of the journal.

Pneuma has grown over the years as it has passed through the hands of its editors. The first volume, in 1979, contained a single issue, including an edito- rial by William Menzies, nine articles, and two book reviews. In the following year, the journal began to produce semiannual issues. William Menzies’s tenor as editor lasted from 1979 to 1983, after which Cecil M. Robeck took the reins of the journal from 1984 to 1992. Robeck was succeeded by Murray Dempster, who edited the journal from 1993 to 1999, and then Frank Macchia served as editor from 2000 to 2009, during which time the journal was acquired by Brill in 2002. In 2010, under the joint editorship of Amos Yong and Dale Coulter, the journal was expanded to three issues per year. After five years, Yong and Coulter passed the coediting role to Peter Althouse and Robby Waddell. In 2016, Pneuma became a quarterly, producing one double issue and two single issues per year. Articles published in the journal are indexed by ATLA Reli- gion Database, Emerging Sources Citation Index (Web of Science),ERIH PLUS, Index to the Study of Religion, New Testament Abstracts, Religion Index One: Periodicals, Religion Index Two: Multi Author Works, Science of Religion— Abstracts and Index of Recent Articles, andSCOPUS.

This fortieth-anniversary double issue opens with a special issue titled “Charles Taylor’s Secular Age and the Future of Pentecostalism.” We would like to thank L. William Oliverio, Jr. for serving as the guest editor for the special issue. Oliverio’s conscientious and capable editing is commendable. We would also like to thank Dale Coulter, who, during his tenure as the second vice pres- ident and program chair of the annual meeting of the SPS, arranged to have Taylor as plenary speaker at the 47th annual meeting of the society. At that

meeting, research on the interrelationship of Taylor’s work and Pentecostalism was presented by Wolfgang Vondey, Michael McClymond, and Michael Wilkin- son. Revisions of those presentations, along with solicited contributions by Caroline Redick and Comfort Max-Wirth, constitute the collection of articles in this issue, which also includes an introductory essay by Oliverio.

In addition to the special issue on Taylor, the second issue includes five inde- pendent articles. In “Charismatic Cultures: Another Shadow Side Confessed,” Truls Åkerlund and Karl Inge Tangen address the autocratic and destructive dark side when charismatic leaders demand blind obedience and uncritical acceptance that in pentecostal circles is supported by an unquestioned super- natural orientation. More than a century ago, Max Weber defined charismatic authority as an ideal-type in order to explain the characteristics of charis- matic leadership.1 The rise of pentecostal-charismatic Christianity has pro- vided ample opportunity for scholars to scrutinize charismatic leadership and its relationship to the individuals who follow these leaders. The authors move beyond scholarship that focuses solely on the leaders and incorporate a criti- calrealistperspectivethatincludesculturalstructuresandhumanagency.They offerananalysisthatexplainsthe interactionamongleaders,followers,andcul- tural supports. Their goal is to propose constructive ways to develop healthier and more sustainable forms for pentecostal leadership in which followers have a responsibility to protect themselves from toxic leadership and dysfunctional organizations.

In “Pentecostal Epistemology, the Problem of Incommensurability, and Cre- ational Hermeneutic: The Harmonious Relationship between Affective and Cognitive Knowledge,” Yoon Shin analyzes the pentecostal epistemology of James K.A. Smith. Incorporating numerous works by Smith that exhibit his embodied epistemology, Shin seeks to resolve the problem of incommensura- bility potentially between pretheoretical transcendence and theoretical imma- nence created by a theory of knowledge that prioritizes affective knowing over cognitive knowing. Shin argues that Smith draws heavily on Heidegger’s concept of Dasein, or being-in-the-world, to argue a person’s already located and inescapable situatedness in the world and orientation toward death. For Shin, Smith’s creational hermeneutic sidesteps this problem by resolving the ambiguous relationship between affective and cognitive knowledge.

In “‘I am Finished’: Christological Reading(s) and Pentecostal Perfor- mance(s) of Psalm 88,” Chris Green offers a theological and creative reading of

Psalm 88, a psalm of lament that is completely void of praise. Green contends that the psalm should be read christologically, thereby providing a perceptive- ness into the passion narrative. He further argues that such a reading for Pen- tecostals would discourage forms of triumphalism and require a serious reex- amination of the possibility of god-forsakenness. For Green, this reading means thatPentecostalsmustperformthepsalm,meaningthattheChristianmustlive from and in the narrative of God’s redemptive story in creation, allowing the Spirit of God to convert the imagination in order to participate in God’s story.

In “Heavenly Harmony: An Analysis of Corporate Singing in Tongues,” Joel Hinck examines the musical structures of the corporate practice of singing in tongues. According to Hinck, the musical descriptions of the phenomenon of singing in tongues as “beautiful,” “angelic,” or “harmonious” come primarily from historical sources of participants, but little has been done to subject the phenomenon to a rigorous musical analysis. In order to address this lacuna, Hinck captures sample recordings of singing in tongues from the 1970s, 1995, and 2011 and uses Audio Xplorer software to analyze the sonograms. Hinck dis- covers that despite the assumed chaotic characteristics of singing in tongues, sonogram analysis reveals sustained pitches of the major scale with the simul- taneous presence of both tonic and dominant chords. The two chords together create the effect of tension and resolution. The findings suggest that the phe- nomenon of singing in tongues does not collapse into disorder, but that “letting go” creates possibilities beyond order in non-order.The multichord structure of the phenomenon must, by necessity, be grounded in community, and the pro- duction of musical sounds in this non-order points to possibilities beyond the limits of rationality, the individual, and community to connect to the created order.

In “Conversion vs. Initiation: Recovering the Initial Christian Experience in a Catholic Context,” Timothy Nagy explores the relationship between conver- sion and initiation from a Roman Catholic perspective. Nagy draws on Heribert Mühlen’s Spirit theology, which seeks to incorporate charismatic pneumatol- ogy, ecclesiology, and personal experience in order to bridge Catholic doctrine and pentecostal experience. Nagy also draws on Donald Gelpi’s notion of peak experiences as applied to Christian initiation as well as other conversion expe- riences in the Christian faith andWalter E. Conn’s view that conversion involves the surrender of autonomy to Christ. Nagy explores the place of conversion in Roman Catholicism through the four lenses of Scripture, peak experiences, autonomy and surrender, and metonoia and epistrophe, which he then applies to three moments of conversion: Catholic initiation, the Rite of Christian Initi- ation for Adults, and infant baptism. Nagy hopes that his proposal might help the Catholic Church recover the experiences of Christian initiation.

We would like to thank the many peer reviewers who provide vital feedback onall articles submittedtoPneuma,including the articles publishedin the jour- nal and the numerous articles that are submitted but not published. The efforts of peer reviewers are an invaluable service to the academy. In the case of the special issue onTaylor, the issue was reviewed in whole by two leading scholars. Special thanks to them.

Pneuma has experienced significant growth in the critical tradition of pen- tecostal and charismatic Christianity over the last forty years.The methods and disciplines that support the study of Pentecostalism have changed and scholars are grappling with globalization, secularization, political theory, and myriad other issues. This fortieth anniversary of the journal gives pause to consider that the study of pentecostal and charismatic Christianity is likely to see many new changes in the future.

ADVENT: Is your church celebrating?

ADVENT: Is your church celebrating? Advent is a season observed in many Western Christian churches as a time of expectant waiting and preparation…