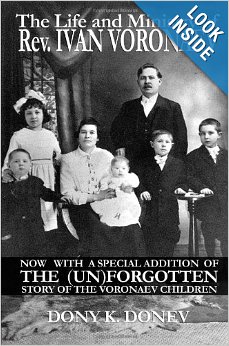 Not So “Little Odessa” (from the book The Life and Ministry of Rev. Ivan Voronev)

By the end of the summer of 1921, Voronaev and Koltovich received their permits to return to Russia and on August 12, 1921 landed in Odessa.[1] It had taken Voronaev over a decade of traveling around the globe to return to his motherland as a Pentecostal preacher and fulfill the divine calling: “Voronaev, Voronaev. Go to Russia!”

The results of his commitment and sacrifice increased quickly. For the first three months in Odessa, he labored among the evangelical churches, sharing his testimony and preaching the full gospel. Then, on November 21, 1921 he organized the Christian Evangelical Faith (Confession).[2] In two years time, the new community had over 370 members and the news of the new Pentecostal teaching spread rapidly across the U.S.S.R. In 1924, the Odessa community organized a regional assembly and at the second assembly in 1925, the Ukrainian Union of Evangelical Christian Faith (Confession) was established.

By 1927, more than 350 Pentecostal Assemblies with membership of 17,000 strong were part of the Union,[3] which continued to grow and by 1944 exceeded 20,000 in Ukraine and 80,000 strong in the whole U.S.S.R.[4] Voronaev’s church in Odessa alone was reported to have over 1,000 members.[5] Government persecution was inevitable. Numerous publications against Voronaev’s work were circulated not only through Communist propaganda, but by some Baptist periodicals, who characterized the Pentecostal ministry as sectarian at best.[6] The Regime could not afford the meetings of large groups of people who were not part of the Communist Party. The Voronaev family paid the ultimate price of their calling for organizing and growing the Pentecostal community in Communist Russia.

In the summer of 1930 the repressions against Russian Pentecostals began. On July 6 (almost exactly 10 years after he left America for his prophesied mission to Russia) Ivan E. Voronaev and B.R. Koltovich, along with some 800 Russian pastors,[7] were arrested for preaching the Gospel through the support of churches outside the U.S.S.R., both sufficient reasons to be convicted in espionage and imprisoned in Siberian work camps.[8] Voronaev’s wife was also sentenced to imprisonment in mid-Asia. Their children were left without provision and no one to take care of them…[9]

[4] Zhidkov, “On the Roads …” (Bv, No. 3, 1957), 62. Around 1936 Donald Gee, who had an extensive ministry at the Assemblies of God training program for ministers at Gdanks (Danzig), Poland, claimed some 80,000 Pentecostals in Russia in Upon All Flesh (Springfield: The Gospel Publishing House, 1947), 31. Both quoted in Durasoff, The Russian Protestants. For a more detail discussion on the growth of Pentecostalism in the U.S.S.R see V.I. Franchuk, Prossila Rossia Dozhdia u Gospoda (n/a: Kiev, 2001).

[9] For the situation in Russia and the story of the Voronaev children see Voronaeff, Paul. Christians under the Hammer and the Sickle (Wichita: Defender Publishers, 1935). Book was printed a total of 11 times in some three years time.

FacebookTwitterSubscribe
Subscribe to receive all news to your email or phone: [wysija_form id="1"]
cityfinallyivanodessareachedvoronaevyears

The newly re-created Sanhedrin in Israel

The newly re-created Sanhedrin in Israel is planning a ceremony to consecrate a stone altar prepared for use in the Third Temple, and…